Taking Electricity Anywhere - A Power Source for Any Lifestyle

The E300 portable generator, Honda’s first engine-powered generator released in 1965, was developed as a “small, light, quiet, and above all easy-to-use portable generator.” Since then, Honda’s generators have evolved with the needs of the customer and of the times, largely focussing on portability.

In recent times with more and more electrical equipment being used in everyday life, people have begun to carry mobile batteries to recharge their mobile phones, needing electricity, even in small amounts, indoors and out. Honda’s LiB-AID E500 was developed in response to the need to use electricity anywhere.

The LiB-AID E500 is a new era portable power source that inherits the light, compact, and simple design aspects of the E300, the origin of Honda’s generators, yet incorporates Honda’s generator technologies and adds new value such as design and ease of operation, making its concept “Taking Electricity Anywhere” a reality.

Honda’s hopes for the LiB-AID E500 is that it becomes a product that customers find new uses for, and that in the customer’s lifestyle, it can help to remove the inconvenience of not having electricity, and go where the customer goes to make good experiences even better. 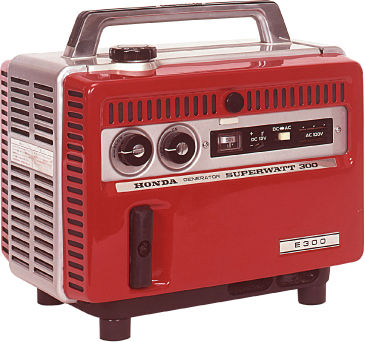 The LiB-AID E500 can be recharged from household wall sockets or car accessory sockets (DC12V).

On the output side, two USB ports (DC5V) and two power sockets (AC100V) provide up to 500W total, or around 1 hour of continuous electricity at 300W rated output.

Honda’s unique microprocessor-controlled sine wave inverter ensures that LiB-AID E500’s electricity is as high-quality and stable as the wall socket, meaning the user can connect with confidence precision equipment such as smartphones and personal computers. 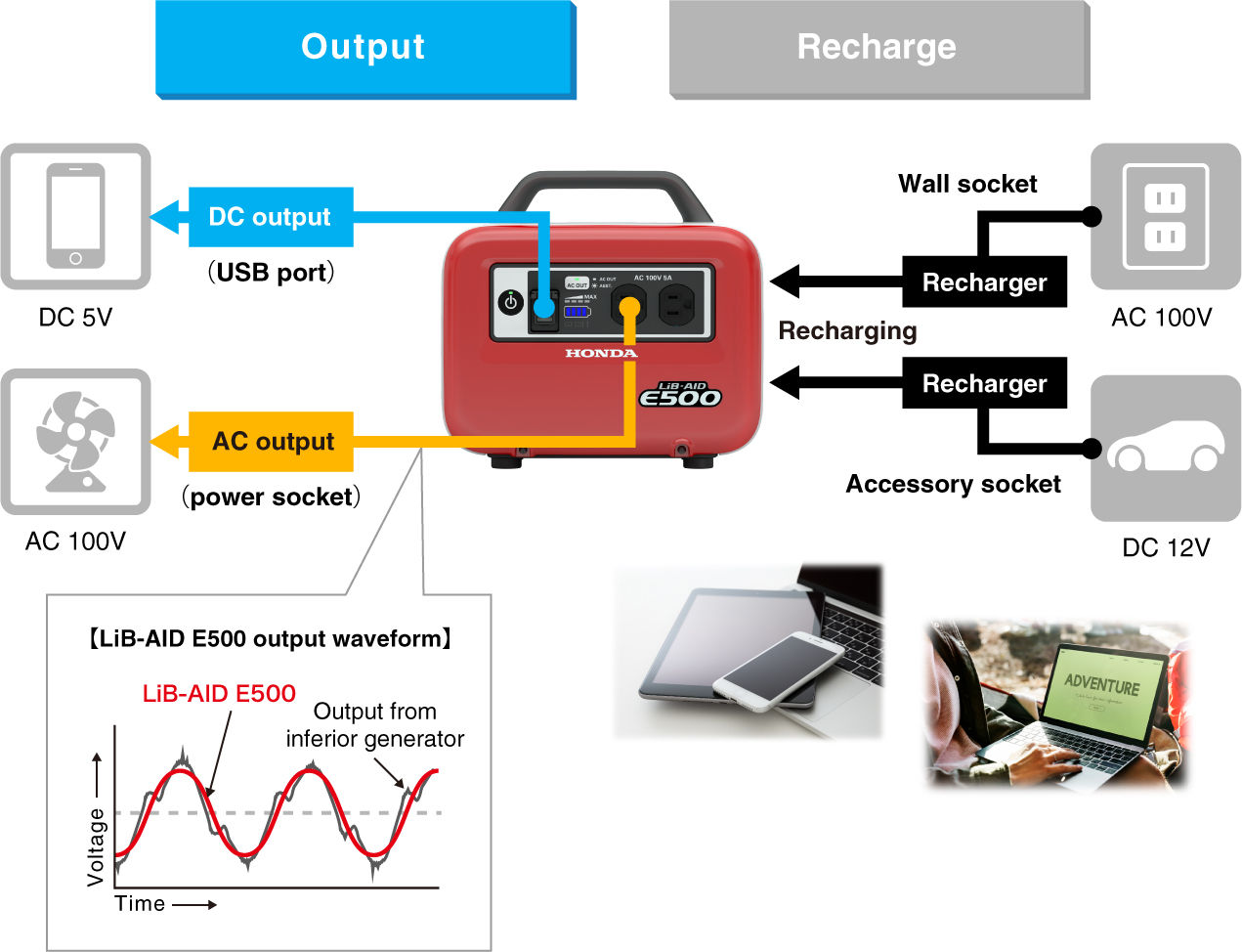 2. Aiming for a “Power Source for Everyday Use”

The LiB-AID E500 differs to engine-powered generators Honda has developed, in that it can be used indoors, and produces no exhaust gas or engine noise. With these features, Honda developed the LiB-AID E500 to be a product that the customer can take anywhere, and use as an everyday item.

Considering portability and aesthetics, the LiB-AID E500 has a bathtub monocoque frame made from lightweight resin, and a specially designed compact, lightweight inverter. Efficient placement of components ensure that heat generated is effectively dissipated, and sound is suppressed.

Using the bathtub frame structure, the LiB-AID E500’s weight was minimized by securing the battery, inverter, control panel and side panel without bolts, and laying out components concentrating wires in the center to avoid the need for braces. 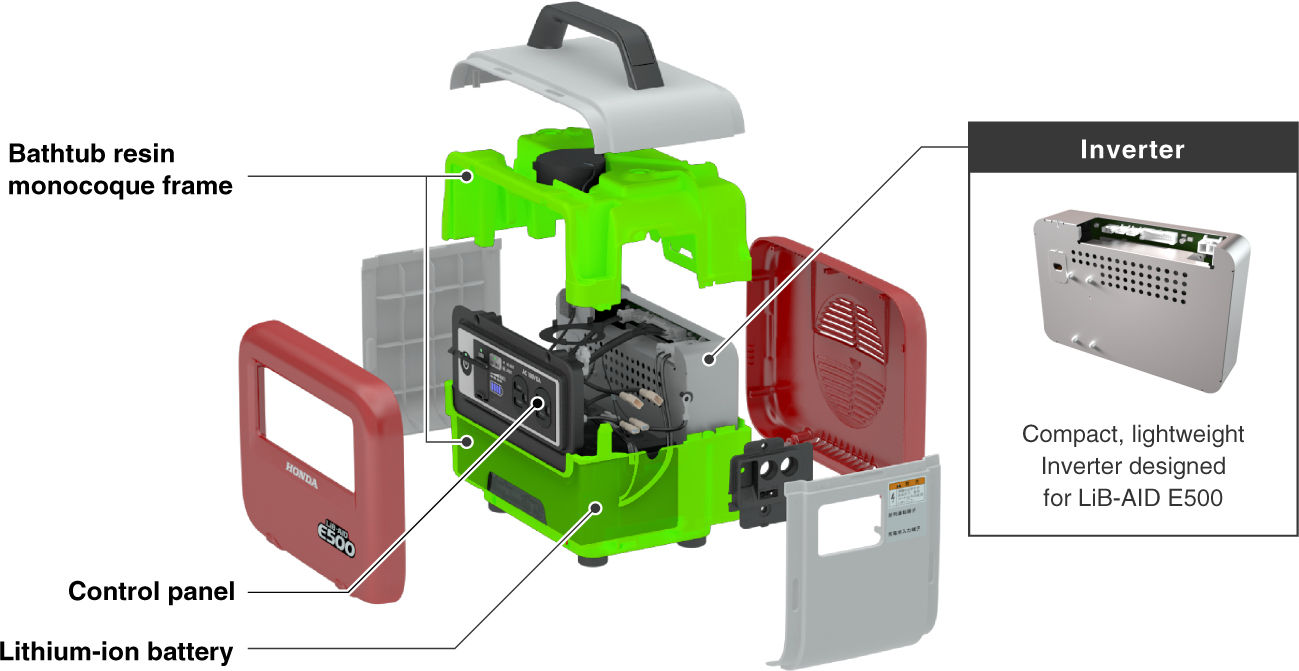 The LiB-AID E500 is designed with slits at the back, to bring cool air into the unit from the bottom, and push heated air out from the top, using natural convection to cool the inverter, even when the cooling fan is not operating.

The cooling fan operates when the LiB-AID E500’s internal temperature rises, but thanks to its positioning in the center of the unit, operating noise is reduced. This allows the LiB-AID E500 to efficiently cool the inverter, while minimizing noise. 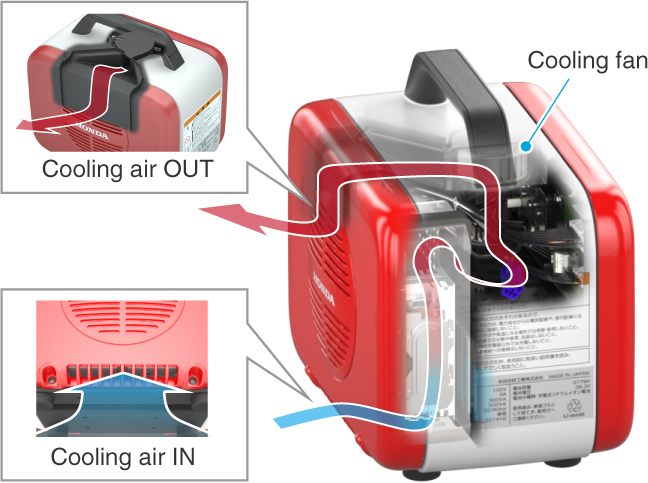 3. Pursuing Ease of Use

By placing all the buttons and outlets required for operation in one place at the front, and positioning the power button on the left, with the outlets to the right, the user can intuitively operate the LiB-AID E500.

Battery indicator, electricity output status and alert indicators are positioned at the center of the control panel for easy viewing.

The operation panel is flush due to membrane switches, and the power button and indicators such as battery use familiar icons, giving the LiB-AID E500 an easy to understand, and easy to operate interface. 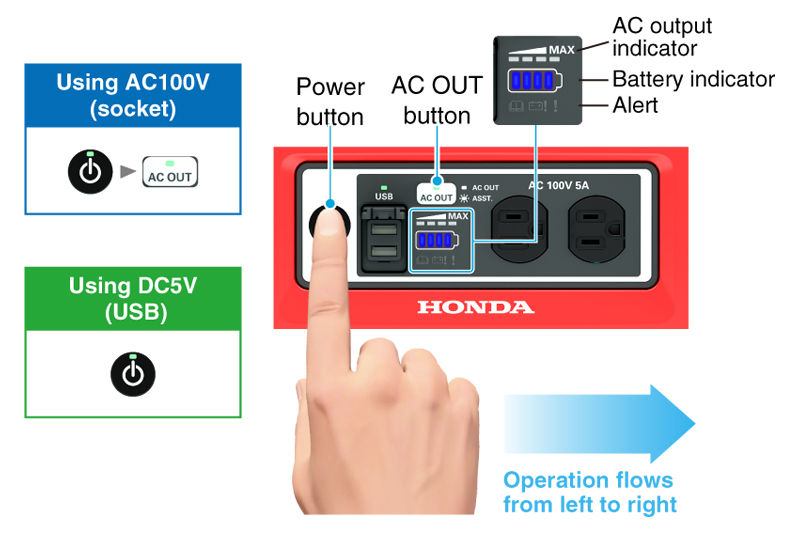 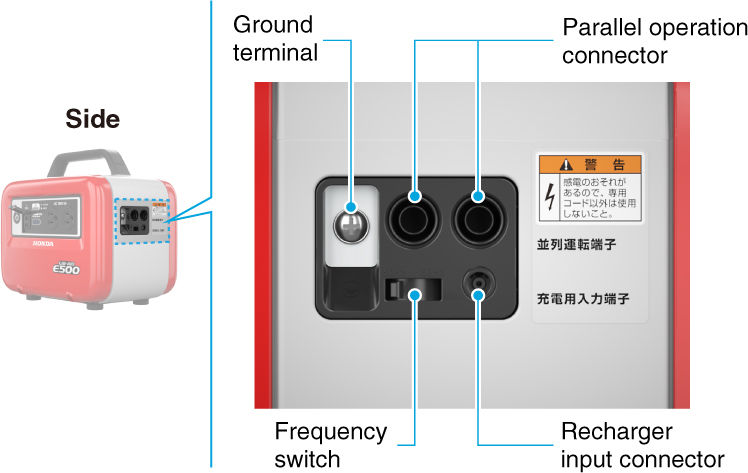 LiB-AID E500 can also be connected to a higher output engine-powered generator for parallel operation.

If the rated output of the main LiB-AID E500 or engine-powered generator is exceeded, assisted operation allows output to be increased for 5 seconds. 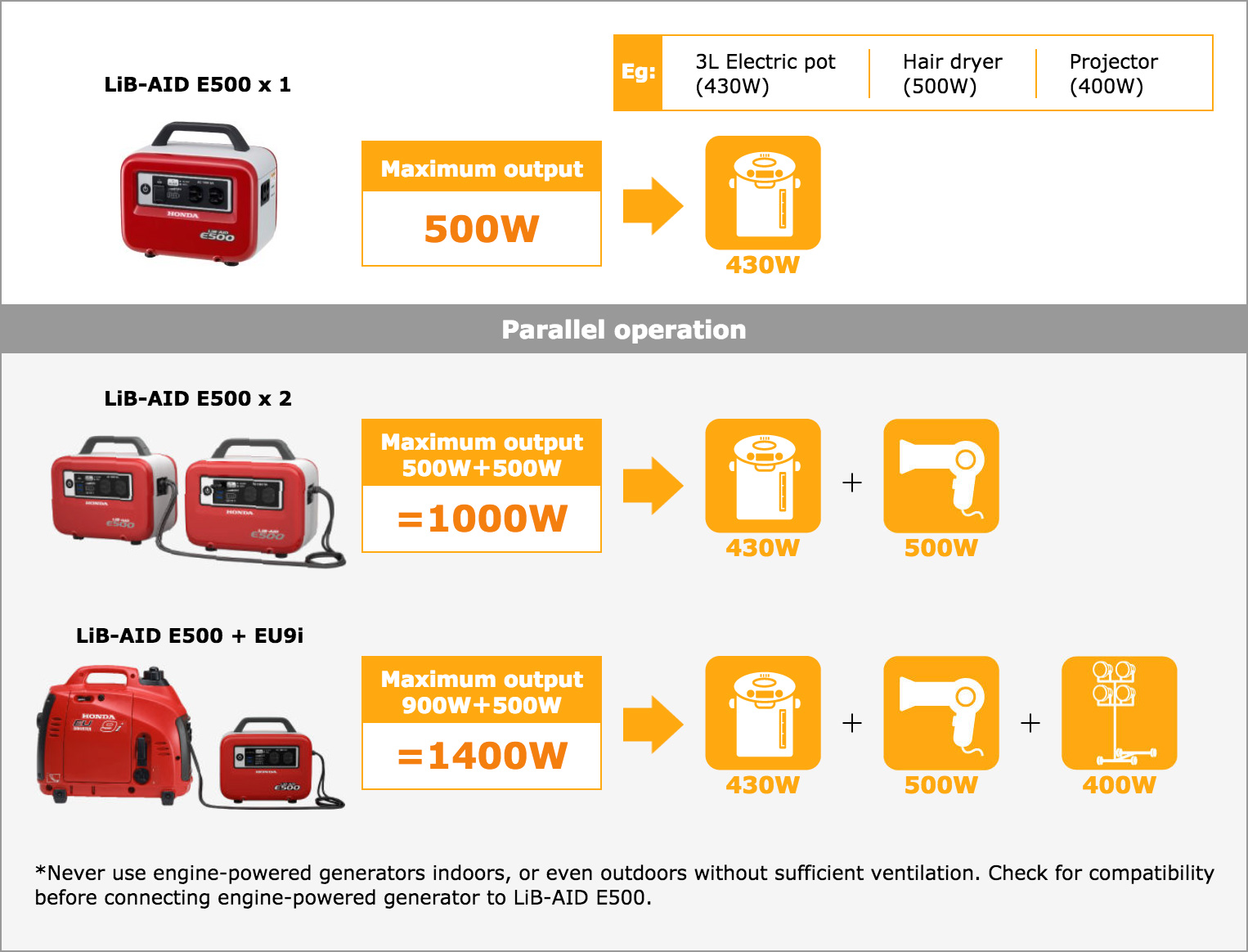 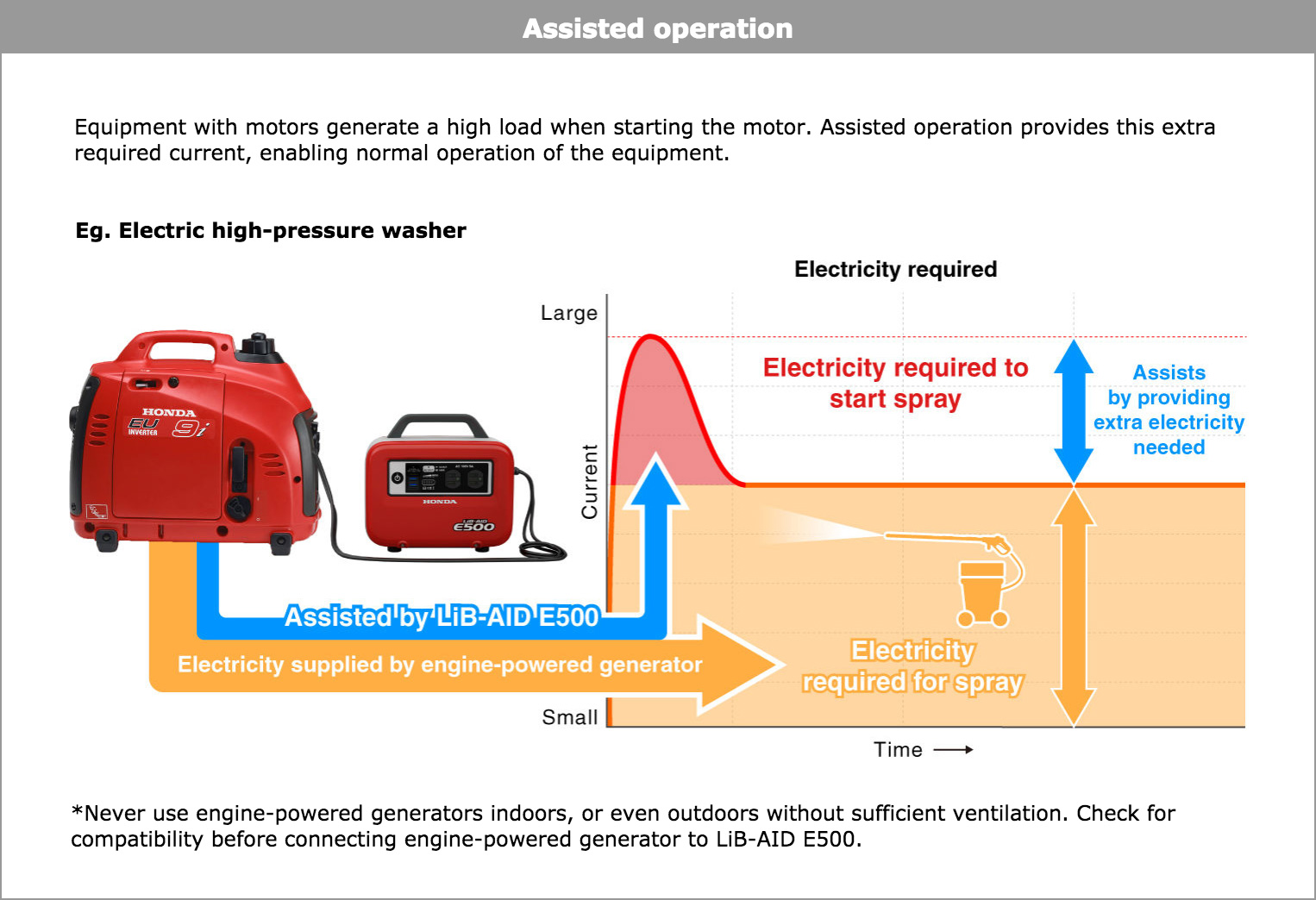