A Magic Tool That Makes This Giant Seem Much Smaller

Over the years, Honda has adapted its Combined Brake Systems to a wide range of its motorcycle models, and Dual-Combined ABS, the version of the Combined Brake System that distributes an ideal ratio of braking forces to both wheels, whether front brake lever or rear pedal is used, and integrates with Honda's advanced Antilock Brake System, has proven to be exceedingly reliable. Among the top-line models currently standard-equipped with Dual-Combined ABS are the Gold Wing and Gold Wing F6B.

During hard braking, motorcycles have a distinct characteristic of lightening and reducing the rear wheel's braking effectiveness, owing to their high centers-of-gravity and short wheelbases compared to cars. When brakes are applied, their overall vehicle weight shifts forward and down toward the front wheel. For this reason, rather than operating from a single pedal or lever, like the brakes on a car, motorcycles have traditionally featured separate front and rear brake operation. This arrangement provides independent control of brake pressure to each wheel in order to more efficiently achieve optimal braking capability over the varying road conditions encountered when riding.

In 2002, the high-performance VFR800 sports bike debuted with a new-generation Dual-Combined ABS that engages both brakes, regardless of whether the front brake lever or rear brake pedal, or both, are used. Riding this then-new VFR let me discover for myself braking capability that I had once thought to be far too difficult, or required much more experience, could be achieved quite easily.

Moreover, its response was not that different from the feel of operating both brakes of a normally equipped sports bike; a perception I had cultivated over time through my own experience. The impression I got was that braking forces were not being distributed equally to both wheels, whether I operated the brake lever or brake pedal. I found that when the front brake lever was used, the usual sensation of brake dive was greatly reduced, and I was able to experience braking control that seemed to maintain a greater sense of stability in the bike's overall behavior. Also, stepping on the pedal provided excellent rear wheel braking response. 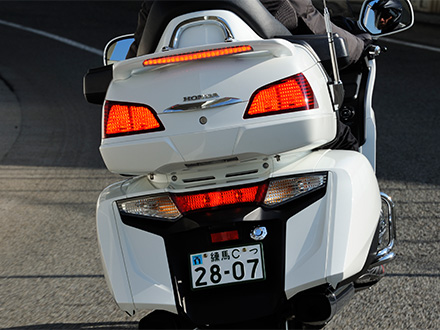 Focusing on the rear brake, I found that even if I stepped hard on the pedal while riding in a straight line, that there was no sense that the rear wheel could be made to lock-up and slide without violently stomping on the pedal. This was astonishing performance, which I confirmed with an earlier model not equipped with ABS.

"Making the Difficult Easy." If I could condense my impressions into a few short words, this is how I would summarize it. I remember being impressed by the support provided by the Dual-Combined Brake System when the motorcycle is correctly and accurately tuned.

When the Gold Wing came out in 2001 as an all-new "1800," it was optionally equipped with industry-leading Dual-Combined ABS, integrating Honda's top-of-the-line Dual-Combined Brake System with a new Antilock Brake System. I am still astonished by the excellent quality of these brakes whenever I ride. Braking is smooth and precise, providing a sense of oneness with the machine, as if this big touring bike had somehow magically transformed into a compact sports bike.

Touring bikes are enormously popular in the United States, the original home of the Gold Wing. Many other manufacturers also export their touring bikes to North America, but I think the excellence of the Gold Wing's brake system stands out even among those other luxury touring models.

Of course, braking performance depends on the combined capabilities of the chassis, suspension, brake system and tires, and the Gold Wing's performance rates highly for each of these factors, a fact that becomes crystal clear when you ride many different models for comparison.

I've ridden bikes from many different manufacturers for both business and pleasure, and really have to take off my hat to Honda for their ability to built such an advanced brake system over a decade ago. Even riding that bike now, its operation doesn't feel the least bit out-of-date, yet it still maintains its original beautifully-made construction, which could almost be called a magic wand that renders giant bodies small.

The quickest way to experience this machine's excellent range of features is to get yourself lost in an urban area riding a bike with the proportions of a small island. Even finding myself on the receiving end of cold and contemptuous looks from drivers of cars and trucks lined up waiting for the light to change, as if they're thinking, "There's a lucky fool who doesn't have to work on a day like this," I can simply press my right foot on the pedal to make a smooth and elegant stop that counters their looks of envy.

Though you might think that either front or rear brake input would do the trick in a stop with a bike like this, the real knack in riding a Gold Wing elegantly is using the rear brake pedal to its full capability. Although ABS does help at critical moments on rainy days, it spares no effort to support the rider anytime and anywhere, extending a hand of selfless love almost as if it were a close member of your family. 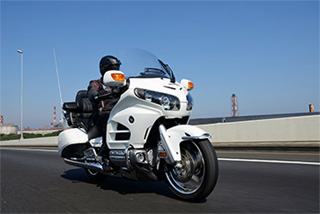 However, when I recounted these experiences to a Gold Wing rider, he asked, "Did you ever try it out over a mountain pass? I only ever use the rear brake pedal though the mountains. Of course, I'm talking downhill, as well. It's not really fair that you're basing your entire opinion of the Gold Wing's braking capabilities on just your experiences riding city streets." I wouldn't have paid him any mind were I not involved in the business. However, I honestly couldn't make any judgment without first trying out his suggestion.

As a result, I charted a course over a pass that climbs up and winds down from a peak altitude of over 2,000 meters. I have to confess that time and again the Gold Wing proved itself to be a real work of genius, because in spite of its huge 400kg-plus form, it enabled me to negotiate that tight and difficult road with sheer delight. Its 1,800cc flat-six engine smoothly rolls on exhilarating power and torque from anywhere in its powerband, making it a real pleasure to twist open its throttle. Once I'd gotten used to riding it, I then tried braking into corners using only the rear brake pedal.

At first I used only the rear brake to slow down on the uphill climb, and felt nothing odd or unsatisfactory about it at all. Until that trip, I'd only ever braked with the right-hand front brake lever augmented by some light footwork on the rear brake pedal, as I would with a normal bike. However, performing all braking operations with only my right foot enabled me to concentrate on the basic operations of braking much more than ever before. And you might well wonder what the result was. Remarkably, I found that I had more time to focus on the other aspects of cornering, such as reading the road ahead, keeping track of road conditions, and even enjoying the scenery!

Wow! This is it! So this is what he was talking about!

As I reached the top of the pass and started my downhill descent, the Wing's exceptional cornering capability combined with the ease of braking using only a single pedal to give me the confidence to further increase my speed on the downhill. As you might expect, my right hand would habitually reach for the brake lever, but if I timed my braking a bit earlier, the Wing would slow right down as if nothing had happened. Now this was a new discovery!

Next, I tried out the performance of the Dual-Combined ABS using only the front brake lever on the long, winding downhill run. Since this input emphasizes the front brakes' operation, as expected, the bike's tendency to shift its load forward was magnified by the steep grade of the downhill road. Despite this, I hardly ever felt the rear-end lighten, and noted that the rear tire kept working well to trim speed and smooth handling under hard braking.

After getting down the pass, I tested only the front brake lever over flat roads to find that the Dual-Combined Brakes always delivered an appropriate amount of braking force to the rear wheel, helping me maintain a more composed riding position. The sense of plunging forward in a conventional brake dive was greatly reduced.

If I were to make a comparison, the sensation I got from each type of brake operation was that using only the rear pedal resulted in a feeling of being pulled from behind by a great force, while the front lever gave the feeling of being held back by a big hand pressing on the Gold Wing's nose. In conclusion, The Gold Wing's Dual-Combined ABS opens up exciting possibilities for learning new riding techniques, just as that Gold Wing rider said. This innovative system, which links up both wheels with the simple operation of a single pedal or lever is an advanced braking and ride support device that smoothly and automatically promotes the correct use of a motorcycle's front and rear brakes. It ultimately gives its rider a deep feeling of satisfaction, and I was finally able to savor that feeling of fulfillment for myself.

Note, however, that riders who get accustomed to the Gold Wing's impressive brake system will have to be especially careful when switching over to motorcycles from other manufacturers. This warning, noted prominently in the Gold Wing's owner's manual, really cannot be ignored, and it indicates the true excellence of this touring machine's highly capable and versatile brake system. 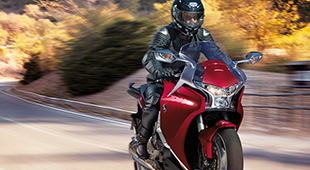 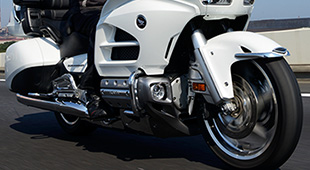 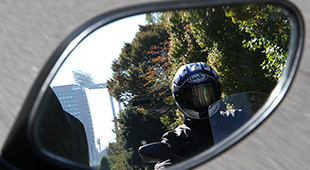 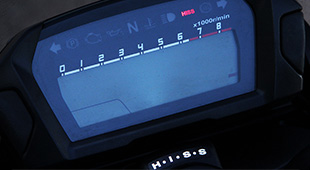 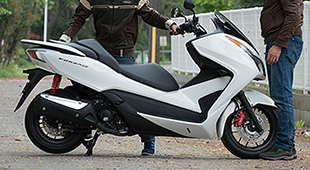 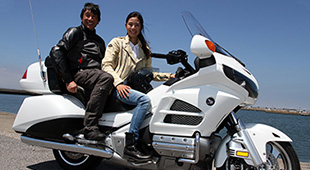 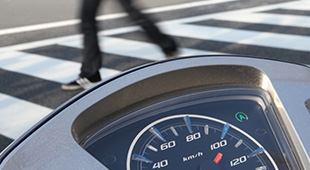 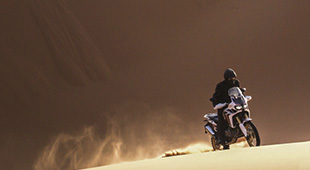 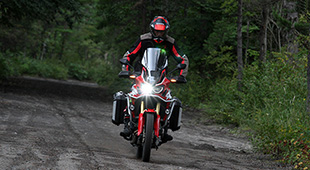 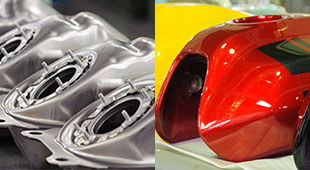