Enjoy the performance of a manual transmission with the convenience of an automatic.
Honda introduces the world's first dual-clutch transmission for use in a motorcycle.

1. What is the Dual Clutch Transmission?

The rider may perform shifting with the standard handlebar switch or with the optionally available foot pedal.

Let’s take a look at how Dual Clutch Transmission automatically operates the clutch and performs shifts during acceleration and deceleration in the VFR1200F. 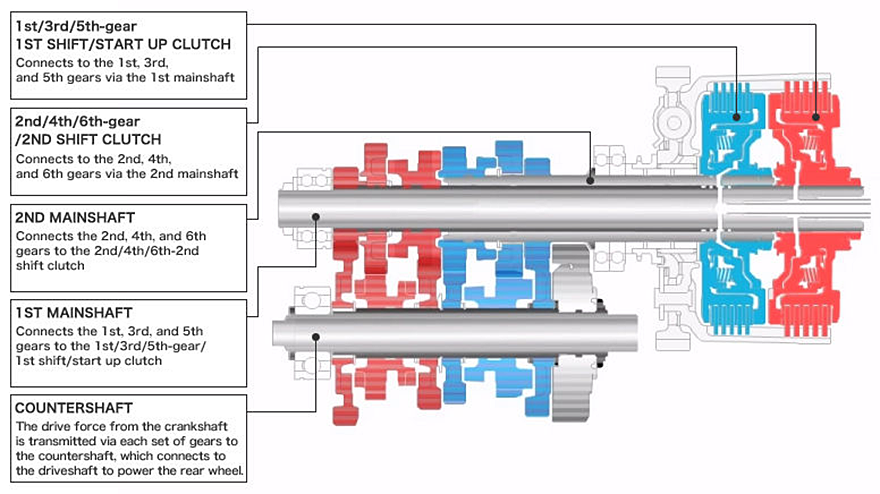 With a regular manual transmission, the rider changes gears with the left shift pedal. This action rotates the shift drum, and shift forks slide the gears into position. In Dual Clutch Transmission, the shift control motor performs this same function, turning a gear shift spindle. (With the optionally available shift pedal, the mechanism is identical.)

Dual Clutch Transmission lets the rider enjoy the riding feel of a manual without the need for shifting or clutch operation. To make this system accessible to as many riders as possible, Honda offers it on a variety of different motorcycles, optimizing its structure to match the engine and model characteristics of each bike.
For example, the NC700S, NC700X*and Integra are New Midsize Series motorcycles that feature the same frame and engine, yet the Integra has floor-like steps not found on the other two models. To harmonize this particular feature with Dual Clutch Transmission, Honda optimized the clutch and crankshaft layout shared by all three members of the series.

*In 2014 to reflect an increased engine displacement, the NC700S and NC700X were renamed NC750S and NC750X respectively.