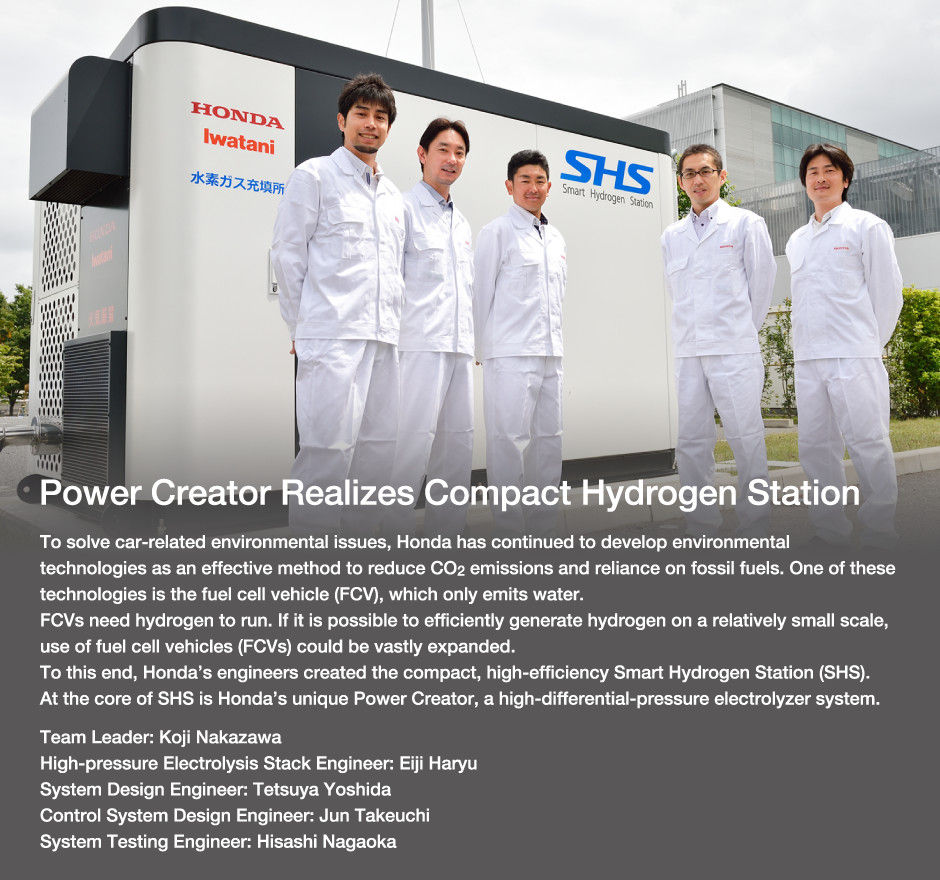 Power Creator generates high-pressure hydrogen, without using compressors. Developing the high-differential-pressure electrolyzer system, a system realized through the culmination of Honda’s advanced technologies, was a challenge to reach the unchartered realm of 350 atmospheres (35MPa).

The Dream: A Car Powered by Water

“It all began with the concept of the ‘fully closed-cycle vehicle.’ Vehicle-mounted solar panels provide electricity that powers the generation of hydrogen from water, and the generated hydrogen powers the FCV. This dream car could keep on running by replenishing the water. But, after doing the calculations, we realized the electricity generated from a small solar panel area could barely generate hydrogen at all. Research of hydrogen generation was then separated from the vehicle, which led to us beginning research on compact hydrogen stations.” (Koji Nakazawa, Team Leader)

In 2002, Honda commenced proof-of-concept experiments in Los Angeles, USA. The system would power electrolysis by solar-generated electricity, and the generated hydrogen would be pressurized sufficiently for storage in high-pressure tanks.

“We commenced design of the components that electrolyze water - stacks - and in 2003, began proof-of-concept experiments of Honda’s own stack.
“Honda develops its own fuel cells, which react hydrogen and oxygen to generate electricity, and this chemical reaction is the exact opposite of electrolysis, so the technology is very similar, and the components such as electrolyte film. We applied our fuel cell technology to developing the electrolysis stack.” (Nakazawa) 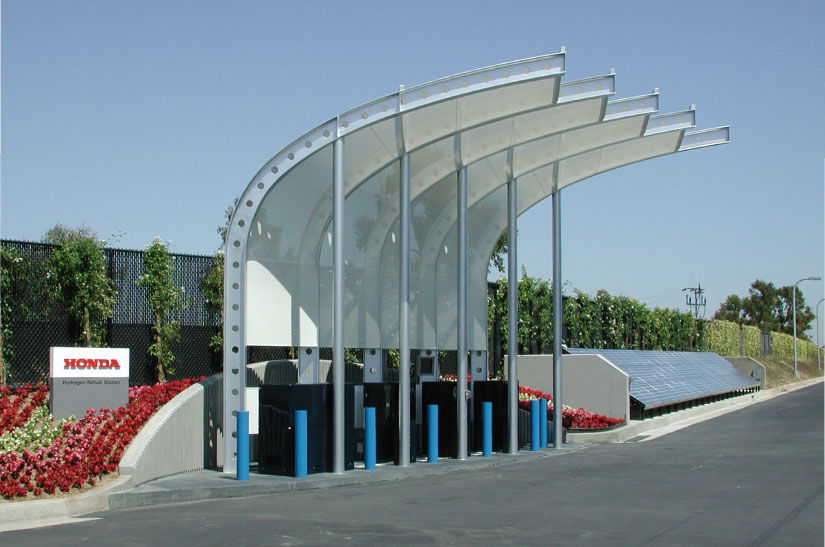 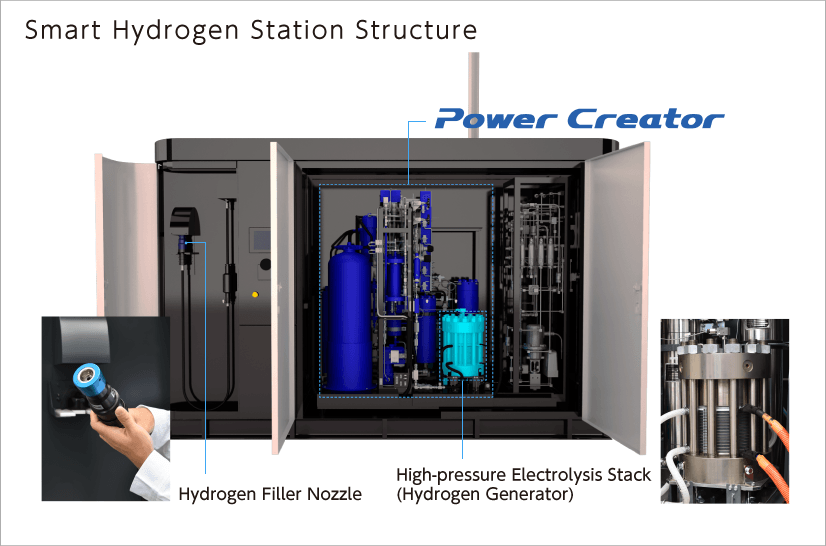 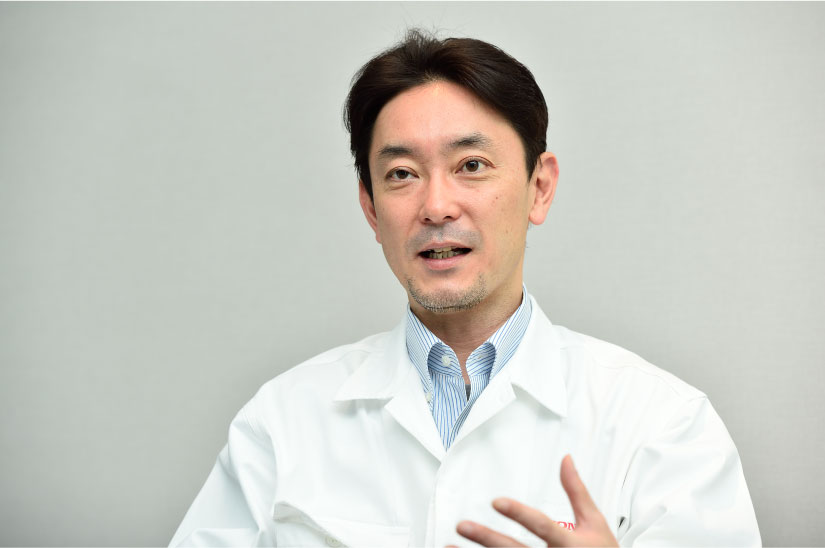 “Around 50% was lost during the process of generating and storing hydrogen using solar-generated electricity. The largest loss was caused by the mechanical compressor. At the time, we were using normal pressure electrolysis stacks, so we needed to use compact compressors on the generated hydrogen. Approximately 20% of energy was lost by raising the hydrogen’s pressure.” (Nakazawa)

The solution, would be found in high-pressure electrolysis.

“With electrolysis, applying electricity to the electrolyte film generates hydrogen on one side, and oxygen on the other. By placing a high-pressure tank where the hydrogen is extracted, the hydrogen itself causes pressure in the tank to gradually rise without the use of a compressor, as long as electricity is continuously applied. This is how high-pressure electrolysis works. The principle is simple, and was well known for quite some time, but nobody could apply it practically.” (Nakazawa) 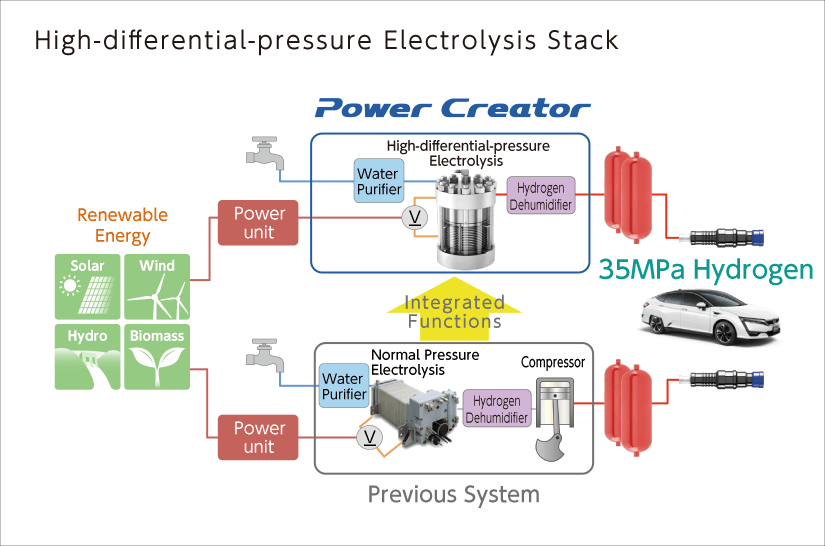 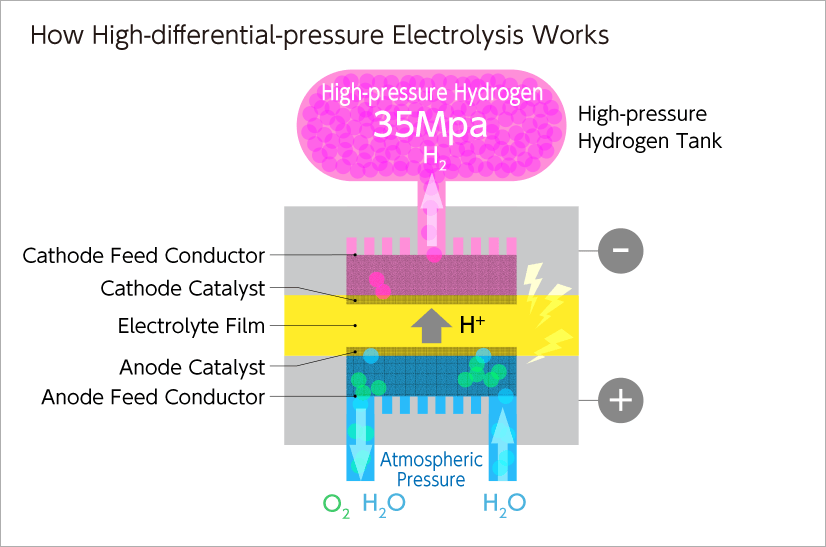 “The electrolyte film is approximately 200 microns thick. It is a thin resin around the thickness of a hair. We had concerns that this resin, thin as food wrap, could withstand a 350 times pressure difference. On the other hand, we were interested in combining the electrolysis stack and compressor using our high-pressure electrolysis technology.” (Nakazawa)

High-differential-pressure electrolysis is a method where pressure on one side of the electrolyte film becomes high, while the other stays at 1 atmosphere. To determine if this method was even feasible, pressure-resistance tests were conducted on electrolysis cells without applying electricity.

“Honda’s way is to experiment to find the answers. We pressure-resistance tested cells made with electrolyte film and feed conductors from normal pressure electrolysis cells, reinforcing only surrounding structural components. Surprisingly, it withstood the pressure! Our goal was 3 to 4 times 35MPa, but the electrolyte film would tear at around 25MPa. We endeavored, and were hopeful, to raise the limit by 10MPa. Things would have been different if the electrolyte film tore at 1MPa.” (Nakazawa)

Development of high-differential-pressure electrolysis stack could now push ahead. The technology was without precedent, causing concerns for the engineers:

“An engineer would normally be concerned with a thin electrolyte film supporting a large pressure difference, but since I majored Chemical Engineering at university, and had no knowledge of mechanical design such as material mechanics, I started development without any such worries.” (Eiji Haryu, High-pressure Electrolysis Stack Engineer)

Once development began, though, nothing went right initially.

“There weren’t any examples to work on, as it was Honda’s original structure. We had to do everything ourselves, including determining design methods and requirements. Through repeated trial and error, though, we learned that there was a significant relation between the shape of the minute holes on the surface of the feed conductor, a porous material, and the thickness and mechanical characteristics of the electrolyte film.” (Haryu)

“We created a model of the deforming and stretching of the porous material’s hole shapes and electrolyte film, and through experiments to confirm the model, we found that hole shapes that we expected to be maintained did not tear, and shapes we expected to tear, did. The relation between the physical properties and hole shapes of the electrolyte film became clear, allowing us to numerically manage the differential pressure structure to protect the electrolyte film. In addition to this, we succeeded in designing a high-pressure electrolysis stack with a stable pressure-resistant structure, by designing the entire cell and stack structural components to be pressure-resistant.” (Haryu) 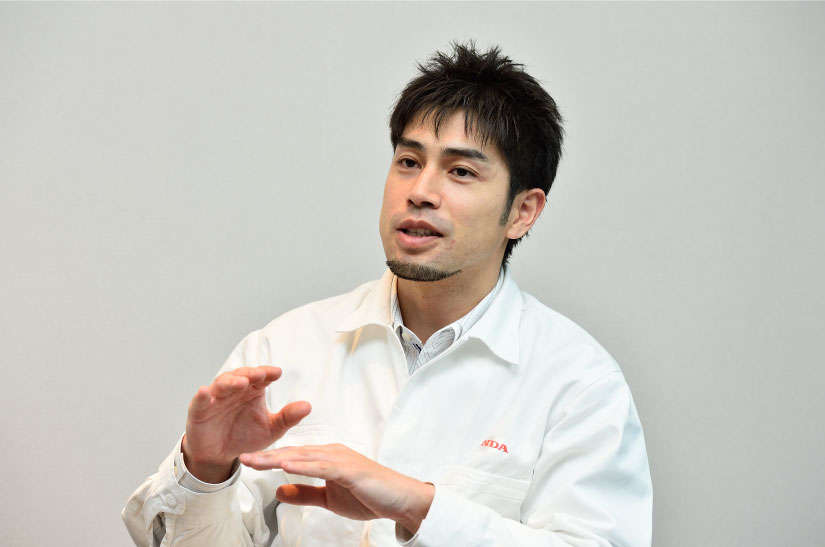 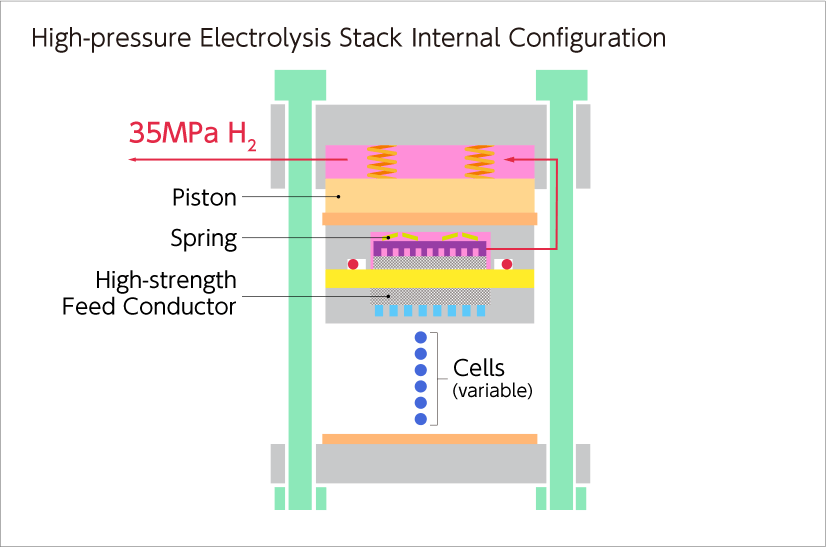 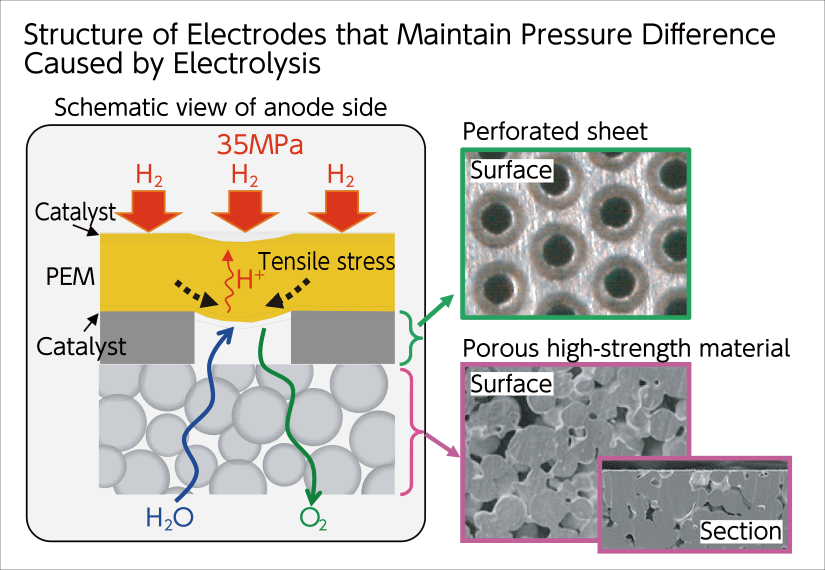 Structure of Electrodes that Maintain Pressure Difference Caused by Electrolysis 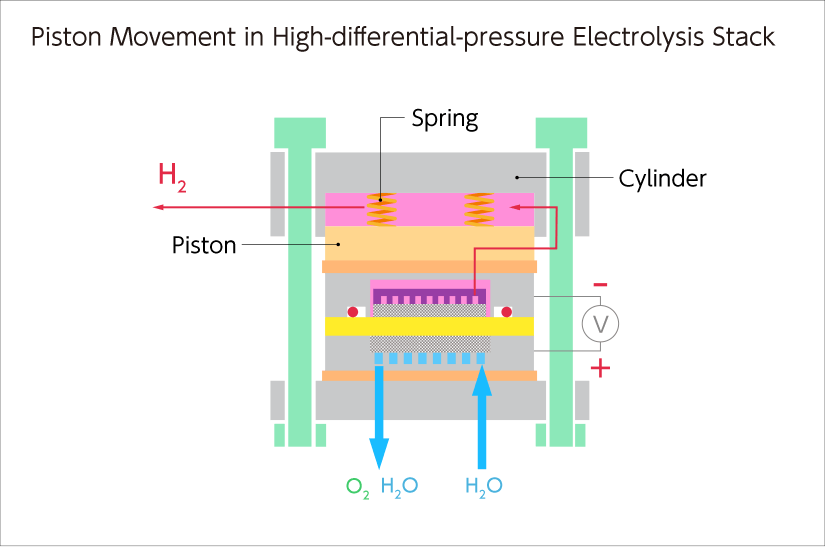 Although they realized a structure that could withstand high pressure differences, problems surfaced once electricity was applied.

Even electrolyte film only 200 microns thick would be slightly compressed once pressure was applied. That would cause a slight gap, which lowers the efficiency of the electricity supplied, reducing its performance. We decided to use springs to push the electrodes onto the electrolyte film. Initially we tried multiple plate springs, but now we use a purpose-designed acid- and alkali-resistant titanium spring which allows an even load to be applied to the entire cell surface, reducing cost and thickness. Honda’s original cell structure, only 6mm thick, was realized.” (Nakazawa)

“When high-pressure hydrogen is generated within the stack, the expansive power tries to push internal components apart. To suppress this load, we placed pistons operated by the generated hydrogen, at the edges of the stack. This allows the cell, made of multiple components, to be constantly integrated, regardless of the pressure within the stack.” (Haryu)

High-differential-pressure electrolysis stack: It is the core technology of the Power Creator, and it became apparent that its realization would bring various benefits to creating the SHS.

Completion of the high-differential-pressure electrolysis stack enabled the generation of high-pressure hydrogen without the use of mechanical compressors. This removed electricity loss due to the compressor, and also reduced the system’s size.

“We could simplify the system by removing the compressor. Since the chemical reaction to generate hydrogen is silent, we could also realize a very quiet system. Another benefit of high-pressure electrolysis is that it dehumidifies hydrogen as well. Hydrogen that powers FCVs is required by ISO to contain 5ppm or less moisture. Normal pressure electrolysis generates hydrogen with around 10,000ppm moisture, which then requires large amounts of heat energy to dehumidify. Electrolysis at 35MPa, however, generates only 100ppm moisture which we could reduce to 5ppm without a compressor and less dehumidifier energy, cutting power consumption to one-quarter.” (Nakazawa)

“Coexisting gaseous hydrogen and (liquid) water is a state unique to the Power Creator, and other examples would be difficult to find. To recover the water, we used a high-pressure gas-liquid separator. By passing generated hydrogen through this separator, gravity would separate and gather the liquid.” (Tetsuya Yoshida, System Design Engineer)

The problem was how to remove the gathered water from the unit.

“Simply opening a valve in a container pressurized to 35MPa would not only drain the water but high-pressure hydrogen, rapidly reducing the internal pressure. Water needs to be drained slowly, while maintaining the hydrogen’s high pressure. We first attempted to drain the water while reducing internal pressure in stages, using multiple pressure reducing valves. As the pressure decreased, the hydrogen contained in the water would bubble, and when passed through the very narrow passages would damage the pressure reducing valves, rendering them useless in the end.” (Yoshida)

Another solution was needed.

“If narrow passages caused damage, then a wider passage makes sense. But, a wider passage causes the pressure to drop rapidly. We had to think of a method of slowly draining the water while maintaining the pressure. We ended up using a long, small diameter metal pipe to gradually reduce the pressure, while not damaging the metal internal surface.” (Yoshida) 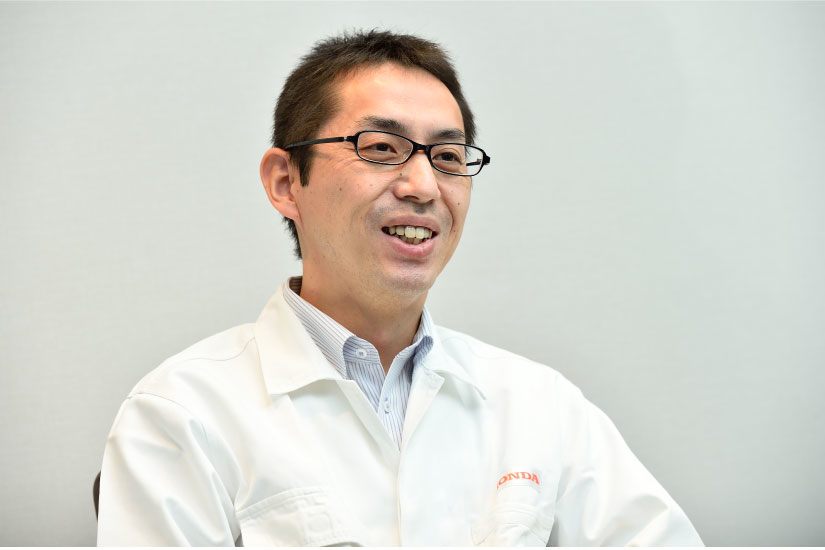 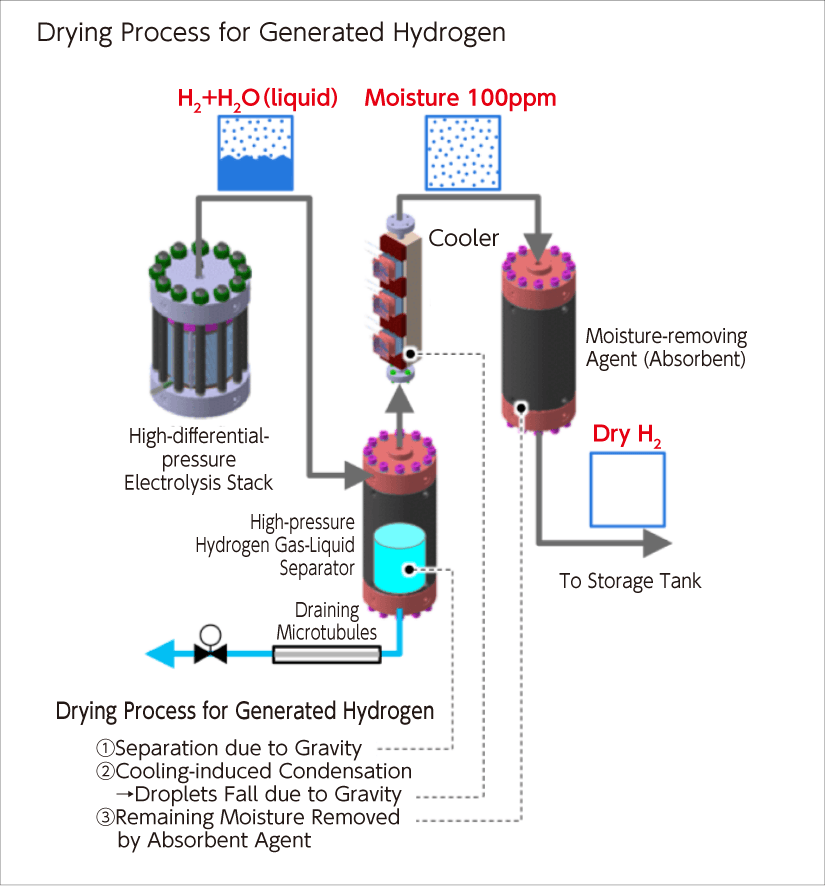 The choice of material was also a problem.

“The Power Creator handles high-pressure hydrogen over 1MPa, so material that can be used for high-pressure hydrogen flow components is regulated by Japan’s High Pressure Gas Safety Law. Small diameter microtubules do exist, but for draining bubbling hydrogen water, we were required to use materials that comply with regulations, without using conventional microtubules.” (Yoshida)

“In order for the high-pressure electrolysis stack to efficiently electrolyze water to generate hydrogen, the water needs to be conditioned accordingly. Tap water is first purified, but in the beginning, we were disposing around two-thirds during the purifying process. We improved this, and reduced water use to around one-sixth through methods such as more efficient purifying devices and reuse of drained water.” (Jun Takeuchi, Control System Design Engineer)

Water use was also reduced by changing the cooling method for the high-pressure electrolysis stack.

“The stack generates heat, so we circulate the purified water to act as a coolant. If water heated by the stack were not circulated, it would heat up to a point where the stack would be damaged. We previously used tap water as a coolant, but by incorporating an air-cooling device we can save on water use, and maintain the purified water at a suitable temperature. This way, we were able to reduce water use to under one-tenth.” (Takeuchi) 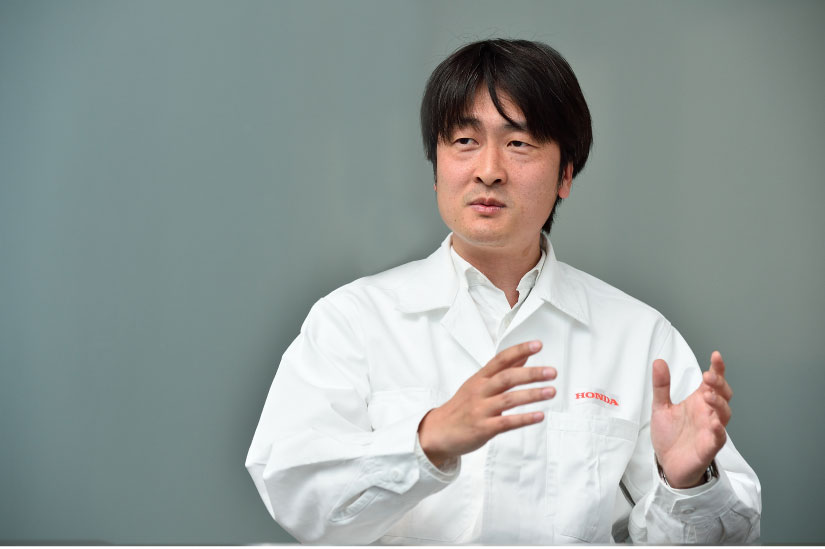 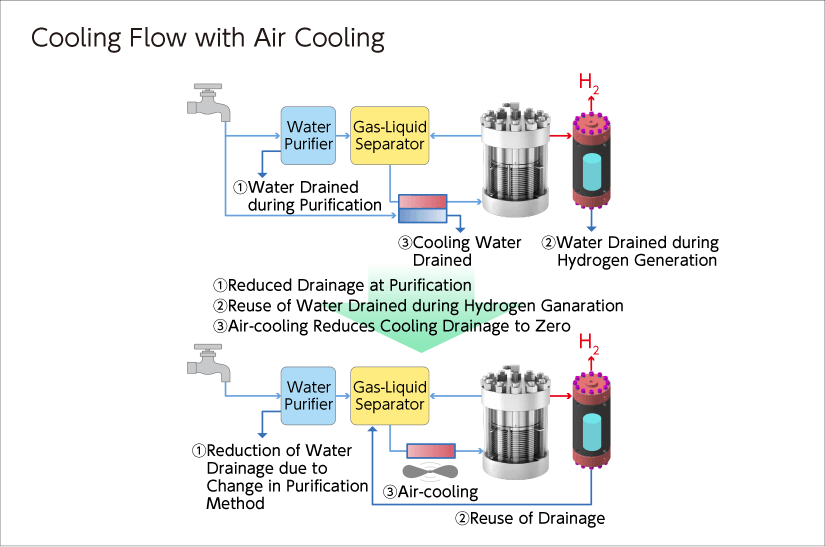 The new Smart Hydrogen Station (SHS) incorporates the Power Creator, and with a hydrogen tank and dispenser to fuel FCVs with hydrogen, is a package that is 3.280m wide, 2.140m deep, and 2.100m high, or roughly the size of a 10ft container. This compact size could not be achieved by reducing the Power Creator’s size alone.

“If a large-scale station manufacturer were to build a compact hydrogen station such as the SHS, the control panel alone would take up the space of two refrigerators. Honda, on the other hand, has the ECU technology for automobiles, which realized a much smaller control panel. This is one of the reasons how Honda’s SHS is as compact as a container.” (Takeuchi)

“In 2010, when Honda installed an SHS with Power Creator in Japan, a large area was required for installation, and a wall was required between it and the accumulator. This was due to regulations for large commercial stations being applied to the SHS, as compact hydrogen stations had not even been considered. Honda first complied with the regulations for large scale stations, and then approached ministries and organizations to relax the regulations. The movement to standardize compact hydrogen stations then began, and now, SHS can be easily installed at more sites than before. If regulations had not changed, we would still probably be required to install SHS at sites as large as a gasoline station.” (Hisashi Nagaoka, System Testing Engineer) 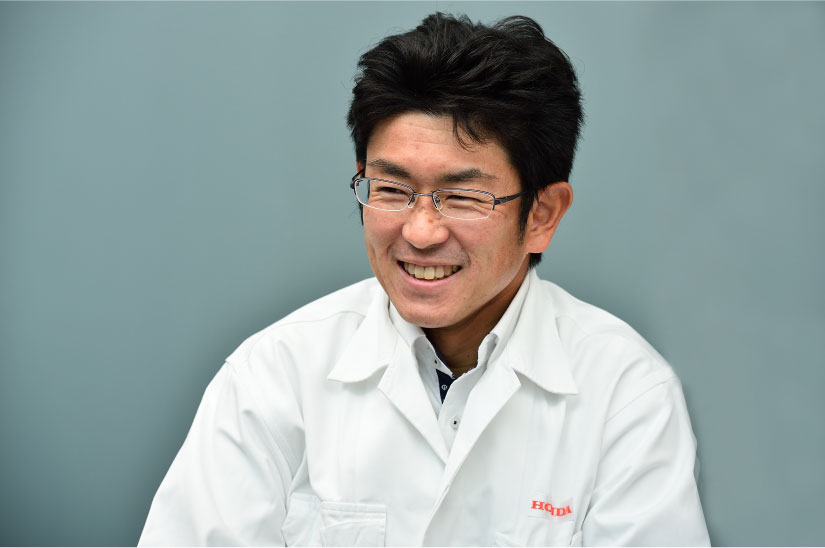 All possible measures have, of course, been taken to ensure safety.

“High-pressure hydrogen is considered dangerous, so we have taken backup measures so that hydrogen will not leak even if a component breaks.” (Nagaoka)

“There are lots of stories to tell about development, but I’m glad it is out of the proof-of-concept stage, and is now a product. Our first objective is to increase the points of a hydrogen-powered society, and then join the points to increase coverage.” (Nakazawa)

The realization of a hydrogen-powered society is Honda’s and its engineers’ dream.

“Even before I joined Honda, I had doubts about a society reliant on fossil fuel. When I joined, I wanted to develop FCVs, but managed to be in a project directly involved with a hydrogen-powered society. My long-term dream is to realize a fossil fuel and CO2 pollution-free society, so I will continue to do my best.” (Nagaoka) 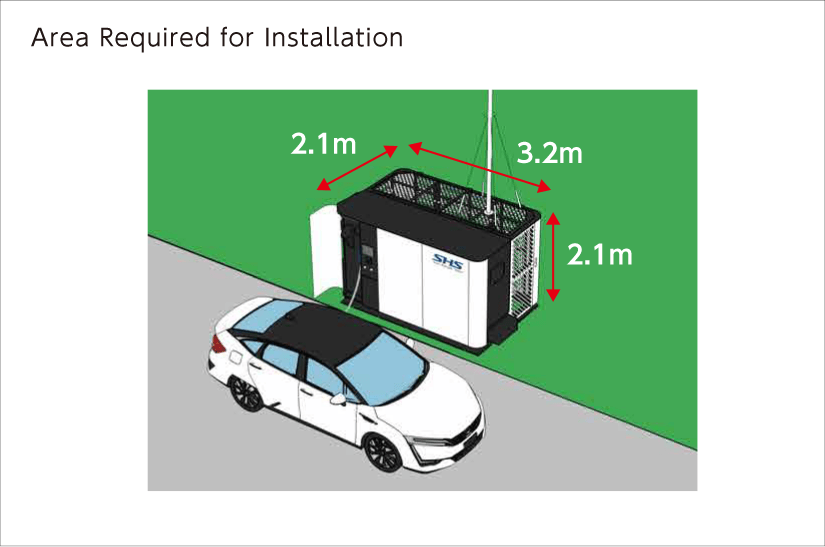 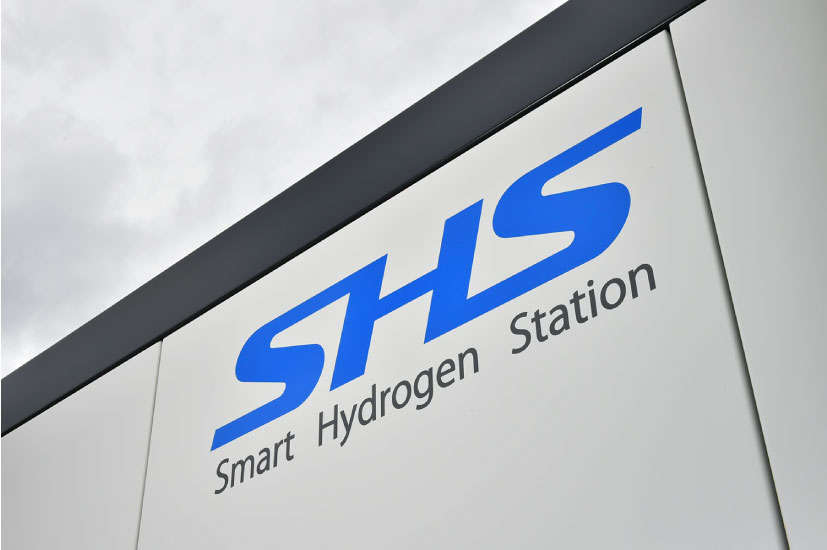