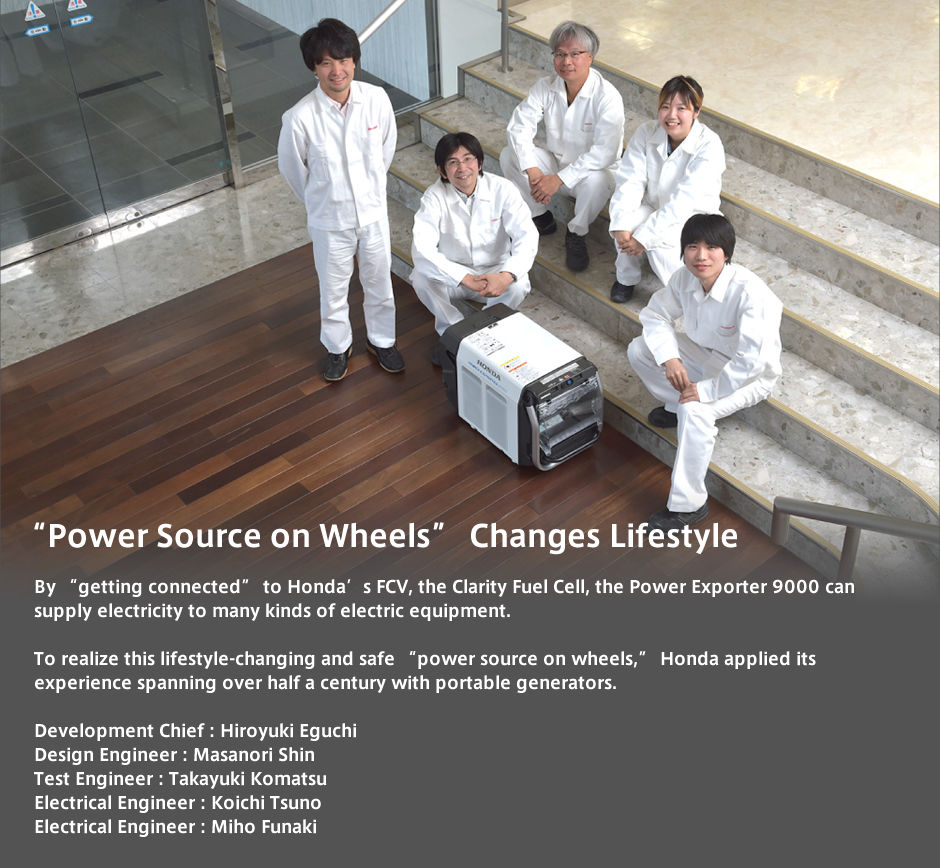 Part 1. Small Enough to Fit in the Trunk

A compact and lightweight package was an unavoidable hurdle in developing the 9kVA high-output Power Exporter 9000 as a commercial product. To turn the Clarity Fuel Cell into a “power source on wheels,” the Power Exporter 9000 had to be small enough to fit in the trunk.

“Electric vehicles have the ability to store a lot of electricity, or generate it. Vehicles spend more time parked than on the move. By tapping into the electricity from a parked vehicle and using it for electric equipment, the vehicle can be turned into a “power source on wheels”.
“We started development of external power sources believing we could bring new value to vehicles.” (Hiroyuki Eguchi, Chief Engineer）

“Honda has produced compact generators powered by gasoline engines since 1965, which are used worldwide for work and play. We developed the external power source to provide high-quality and easy to use electricity, based on the knowhow Honda has accumulated.” (Eguchi)

The Power Exporter 9000 can output 9kVA (9,000VA), which in combination with the Clarity Fuel Cell, is enough to power an average household for approximately a week*. * Calculations based on daily electricity usage by average household (according to Federation of Electric Power Companies of Japan)

“Japanese regulations require a license to handle output from a vehicle exceeding 10kVA, so 9kVA is the maximum any customer can easily use.” (Eguchi)

Realizing such a high output in a small package was not easy feat. 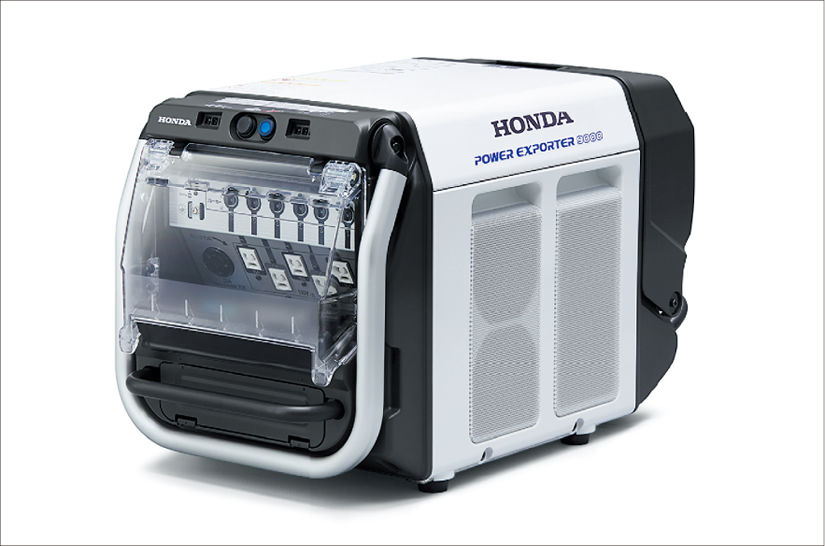 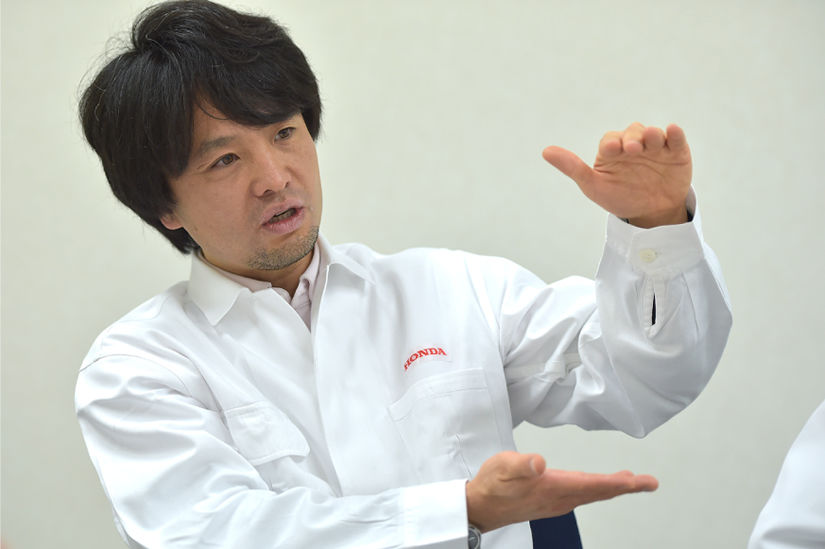 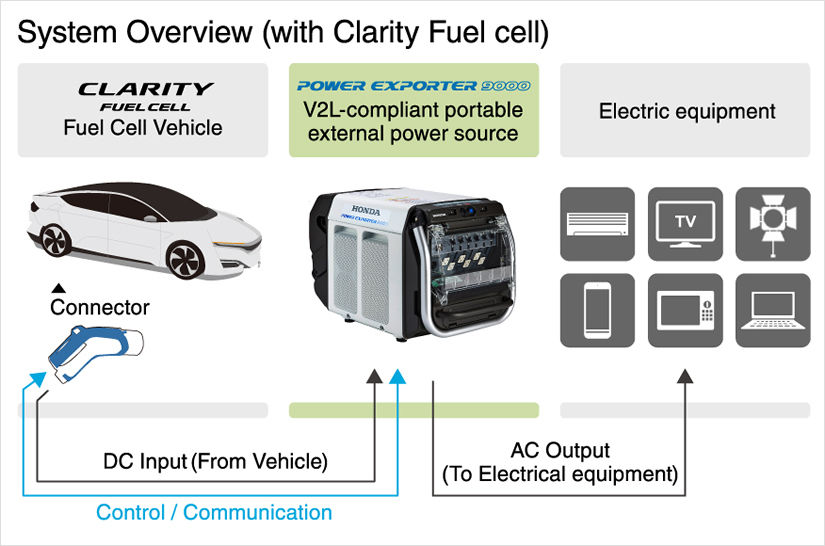 To utilize the Clarity Fuel Cell as a “power source on wheels,” there were conditions that the external power source had to meet.

“It obviously had to fit in the vehicle. Making it small enough to fit in the Clarity Fuel Cell’s trunk was an absolute requirement. And, considering transportability, it had to be light.” (Eguchi)

Calculations during early development, however, did not meet size nor weight targets.

“According to our initial diagrams, it was too wide and large, and it would prevent the trunk lid from closing. It was initially 65kg, but considering Labor Standards Act, we had to bring the weight down to under at least 60kg for two people to carry it.” (Takayuki Komatsu, Test Engineer)

The “converter” and “inverter” are the most important components for external power sources that convert direct current into electricity for household use. The converter takes direct current electricity which varies according to the electric vehicle, and converts it to a voltage easily transformed into alternating current. The inverter takes electricity from the converter, and transforms it into 100V or 200V alternating current. Reducing the size and weight of the converter and inverter were key to realizing a compact power source.

“We reduced the size of the converter by dividing in two and stacking the circuit board. We didn’t have to fill the space between the boards with resin mold, so we could also reduce weight.” (Miho Funaki, Electrical Engineer)

“With the Power Exporter 9000, the converter and inverter take up half the weight. The unit has 3 converters, so even a 100g-lighter converter plays a big role in reducing weight. In fact, we have managed to reduce the combined weight of the converters by 1.5kg.” (Koichi Tsuno, Electrical Engineer)

The more compact the unit, the more cooling becomes an issue, as outputting 9kVA generates approximately 1kW in heat, equivalent to a household electric heater.

“We could not avoid using cooling fans, but these fans weigh around 400g each, and we wanted to minimize the number of fans considering power consumption and noise. We had a lot of difficulties working out how to efficiently cool the unit. The inverter generates the most heat, so we had to concentrate cooling on the inverter. Although not as hot, we also wanted to evenly cool the converters which generate heat on both sides. We placed two fans at the inverter end to pull air in, and two fans at the converter end to push air out. By staggering fan positioning, we knew we had found the right way to efficiently move air through the unit. By using only four fans, we realized a low sound power level of LWA57dB. The Clarity Fuel Cell in conjunction with the Power Exporter 9000 is completely different to a conventional generator, and can provide quiet, clean electricity.” (Komatsu)

Additional measures such as use of an aluminum frame and resin components, helped reduce the unit’s weight to 50.8kg. 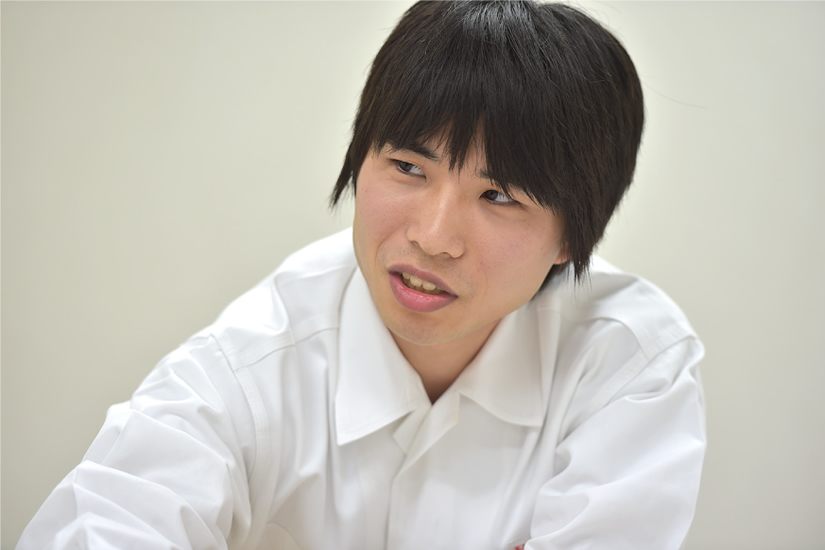 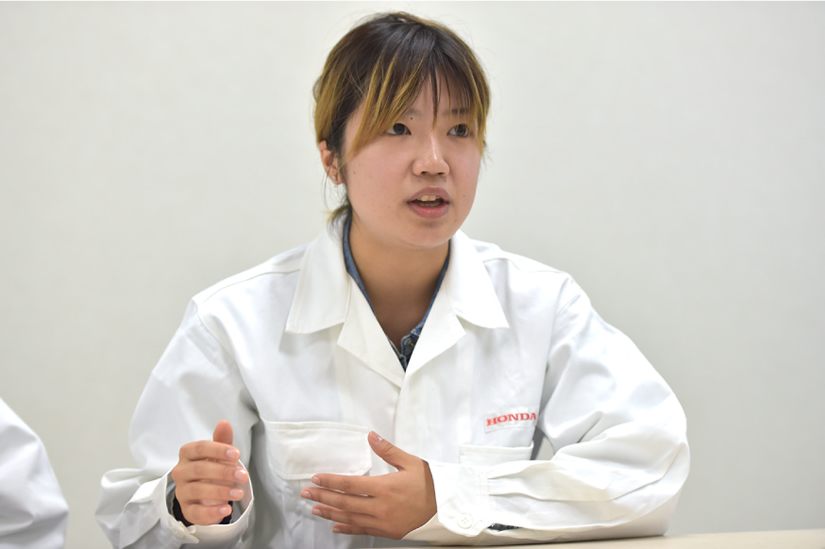 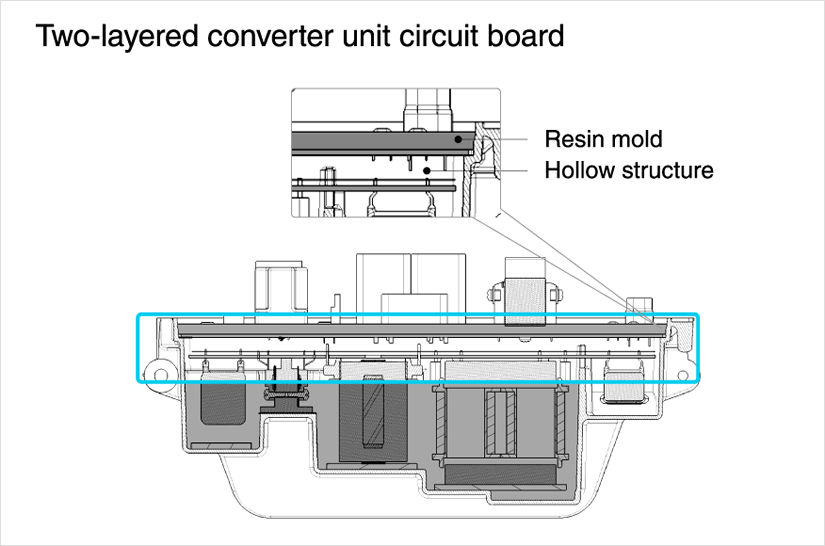 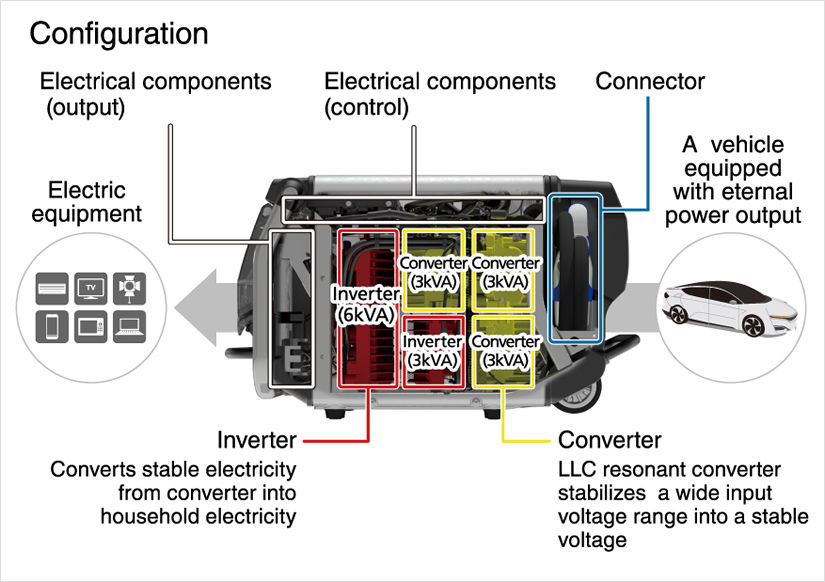 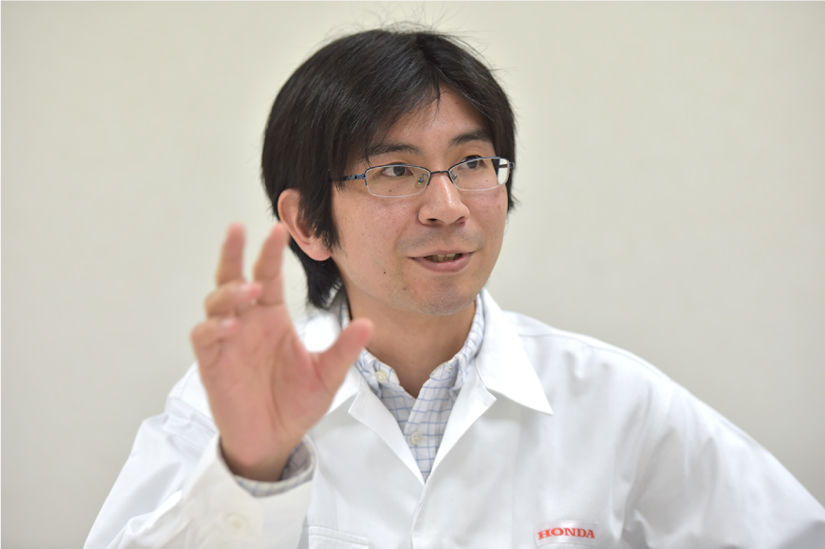 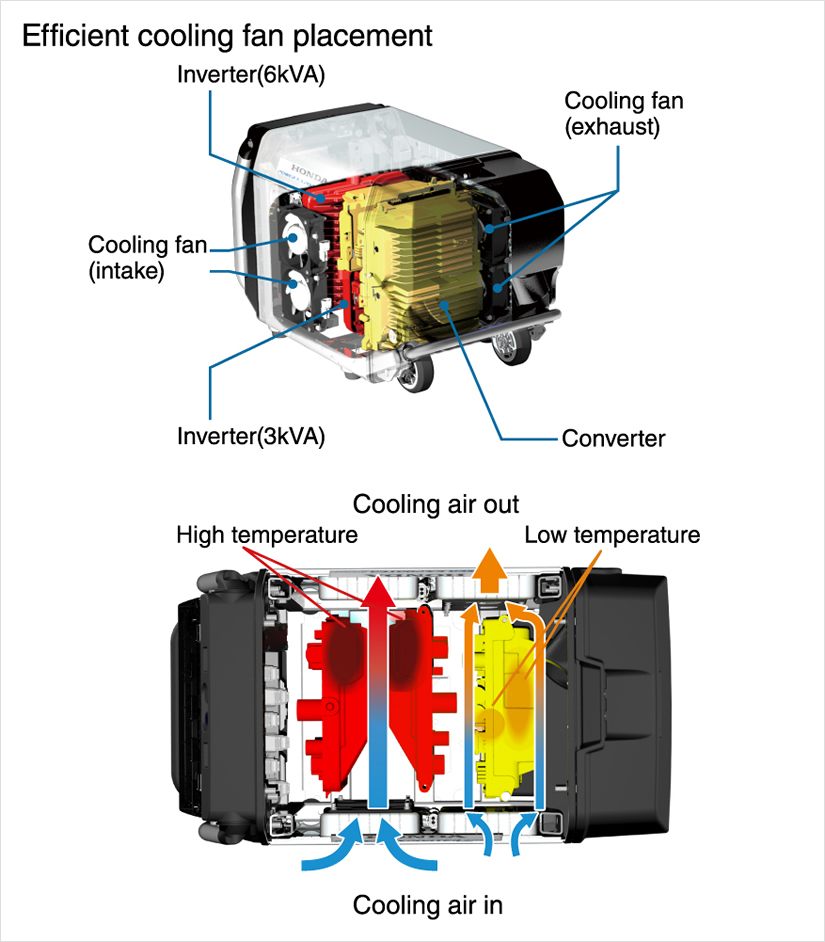 There were components the team insisted on including, despite an increase in weight: the handle, and wheels.

The handle and wheels were designed to be as light as possible.

“We already had experience using lightweight materials with gasoline generators. We used aluminum for the handle. We designed the handle’s movement to be constrained by friction, and not by increasing components, to reduce weight. Resin wheels also contributed to reducing weight.” (Masanori Shin, Design Engineer)

A lot of ingenuity went into realizing high stability as well.

“When stationary, the unit is supported by four mounts, and not the wheels. With two wheels and two mounts, the unit would move if the mounts were not on the ground. With only four wheels, we’d need a locking mechanism, which would increase size and weight. We also placed the wheels so that the wheel centers were higher than the ground when stationary, so that we could decrease height and center of gravity. This improves stability when transporting the unit.” (Shin) 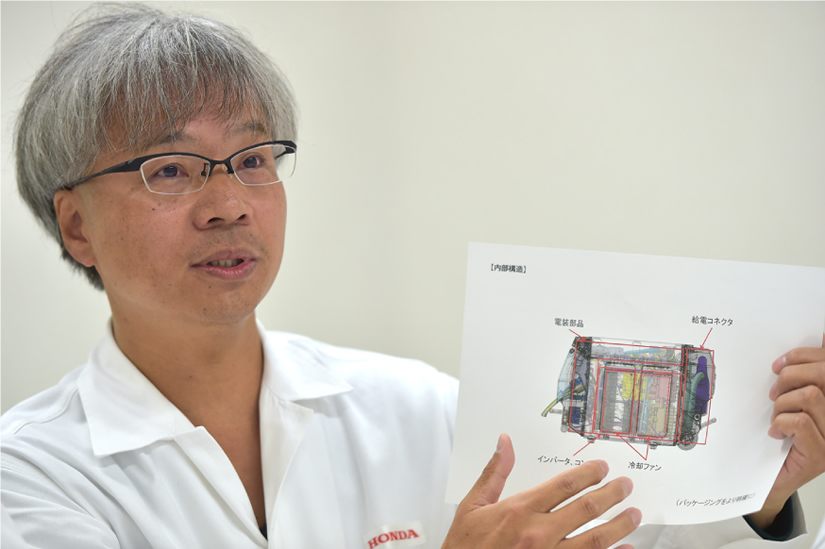 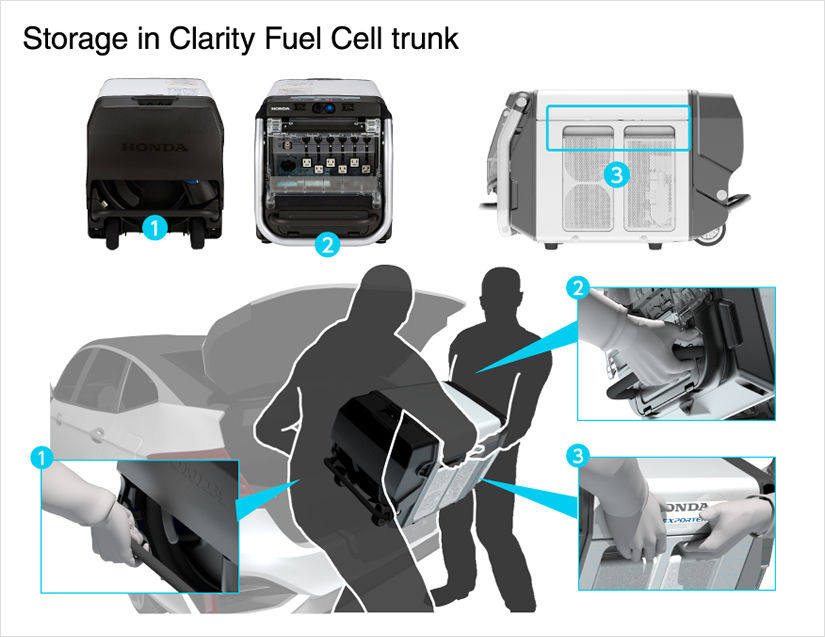 More Vehicles that “Get Connected” the Better

The Power Exporter 9000 was designed to connect to more types of vehicles with power output, and power more types of electric equipment.

Developing the world’s first product of its type, however, had its problems. At the beginning of development, measurement standards for the guideline had not yet been set.

Apart from the Clarity Fuel Cell, we had to verify use with EVs, PHVs and FCVs from other manufacturers.

“Even though there were guidelines for vehicles, there weren’t any standards to certification. Even if the vehicle complied to the guideline, there was not third party organization to verify. We had to physically test the Power Exporter 9000 with vehicles, and when it worked, we gained confidence.” (Tsuno) 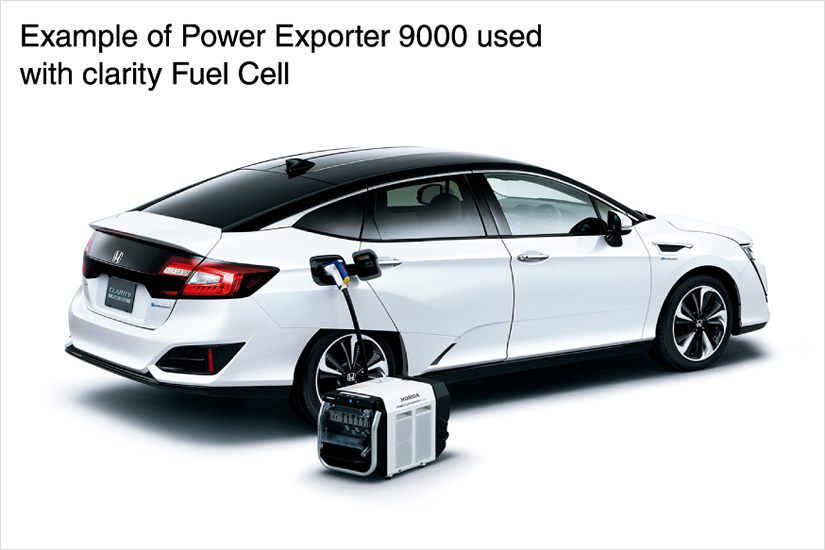 External power sources are designed to convert electricity from vehicles, or “power sources on wheels,” to power a wide range of electric equipment. This requires “clean electricity” to be output.

“Disturbances in alternating current waveforms can cause fluorescent lights to flicker and prevent electric equipment from working. Since 1996 Honda has been developing sine-wave-generating inverter generators, and having listened to our customers’ feedback and requests, have developed technologies to output cleaner electricity.” (Eguchi)

More than 20 years of inverter generator knowhow has gone into the Power Exporter 9000. Noise reduction is an issue Honda takes seriously.

“If electric noise prevents a user from hearing an emergency radio broadcast, this could be disastrous.” (Funaki)

To reduce noise, the Power Exporter 9000 is equipped with LLC resonant converters.

“LLC resonators use two coils and a condenser to convert direct current voltage. According to the Electric Vehicle Charge/Discharge System Guideline, vehicles can output 150V to 450V, and one of the only ways to meet such wide voltage requirements was to use LLC resonance.” (Funaki) 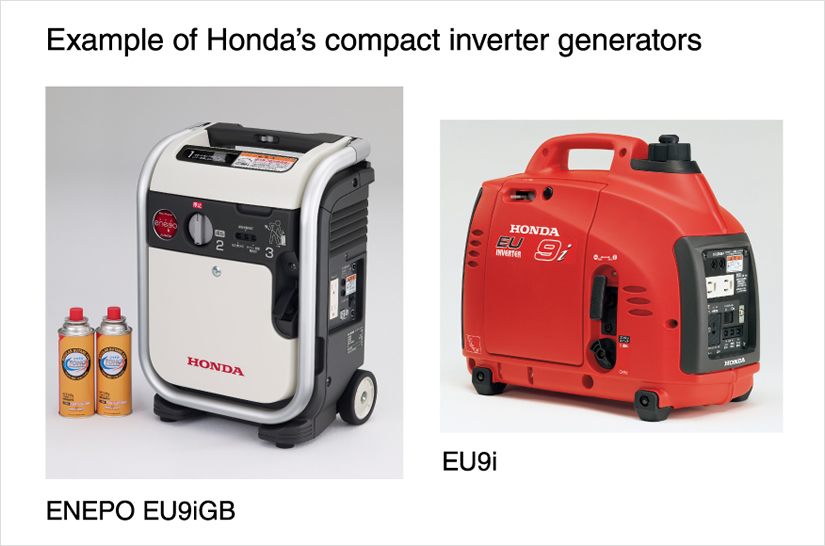 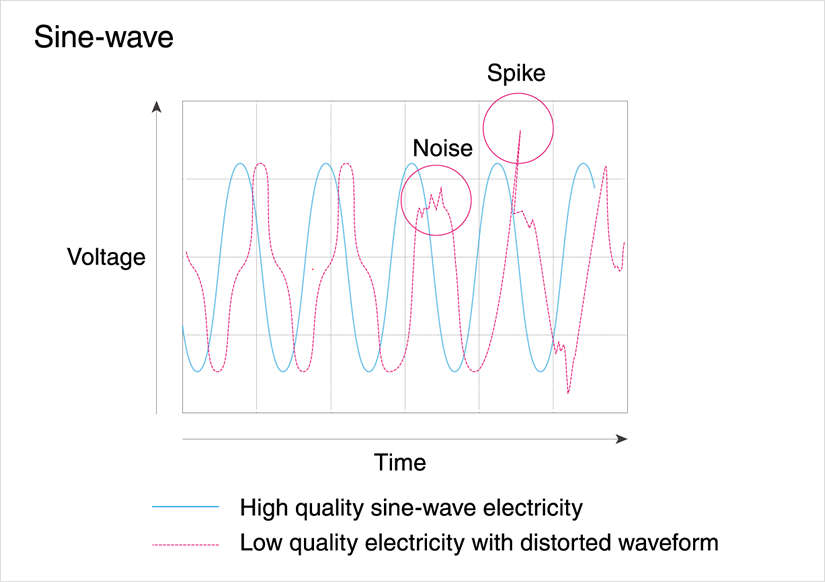 LLC resonance has the added benefit of reducing electric noise.

“Converters tend to have switching noise problems, but with LLC resonance switching occurs when the voltage reaches zero volts, so noise is suppressed. This also contributes to reducing weight, as we don’t need noise reduction filters or ferrite cores.” (Tsuno)

The team’s efforts paid off, enabling the Power Exporter 9000 to power a wide range of electric equipment, including precision devices.

“We’re still at the proof-of-concept stage, but with the help of the Tottori University Hospital, we conducted matching tests with portable medical equipment for emergencies. Before that, we had the physician compare grid power with the Power Exporter 9000’s output using an oscilloscope, to verify its sine-waves were as good a grid power, and then we connected and successfully tested medical equipment such as portable X-ray machines, defibrillators and echo devices. Under current regulations, these medical devices must be powered by JIS-compliant power supplies. We conducted these proof-of-concept tests to see how we could help in saving lives in a disaster.” (Tsuno)

“We visited the disaster-stricken areas and residents told us they needed lighting the most. They could not start a fire indoors, so they needed electricity for lighting. Lighting leads to a feeling of security. We hoped that the Power Exporter 9000 could provide the lighting, and security, for the residents.” (Komatsu)

Various proof-of-concept tests are being conducted using the Power Exporter 9000, bring new value by using vehicles’ electricity. Honda’s strength lies in the ability to combine its expertise in both automobiles and power products.

“Honda will continue to create new products, such as the Power Exporter 9000, to make the world a better place.” (Funaki) 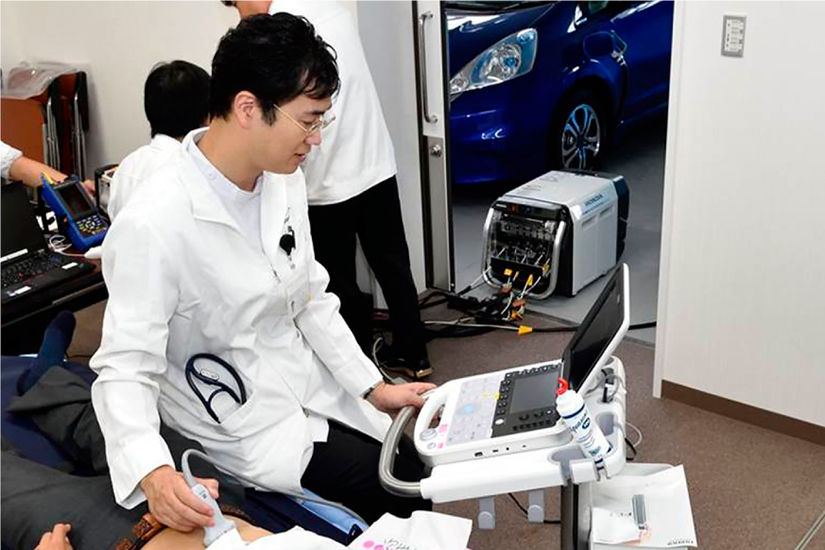 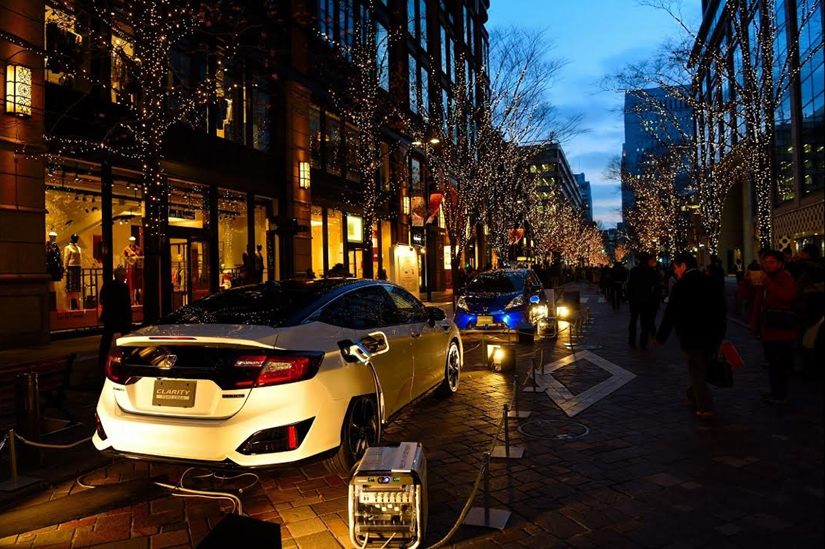