A Send-off Befitting the Father of the Company

When Soichiro Honda stepped down as president of Honda Motor (September 1973), he was praised by many for his proud and resolute manner. Not surprisingly, Mr. Honda had devoted serious thought to the day he would depart from this world. 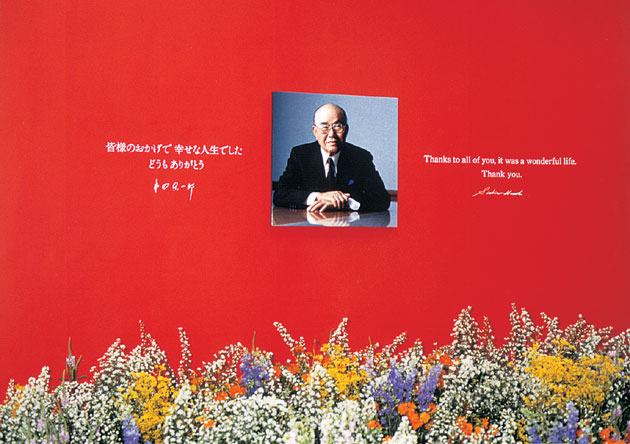 The photograph of Soichiro displayed at the entrance to the Thanking area. Gazing at the calmness of his expression, those visiting the hall felt as if he were talking to them.

He often said this to people around him: "I was able to lead a wonderful life because of our customers, business partners, people in society, and employees. When I die, please place my personal message in newspapers around the world, saying 'Thank you very much.'"

From the earliest days of childhood, young Soichiro was taught by his father, Gihei, not to cause problems for other people. Adopting this as his personal philosophy, Mr. Honda would often say, "I have lived my life as an automobile manufacturer. How can I cause serious traffic on the day of my funeral?"

"Since we had to issue a company notice on August 6, we began discussing how we could best honor the intentions of the company father and send him off the way that best suited him instead of holding a company funeral," says Michiaki Shinkai, director of the Orei-no-kai Administrative Committee.

Since what Mr. Honda wanted most was to express his appreciation, or the words "thank you" to people in the world, the farewell ceremony was named "Orei-no-kai (thank-you gathering)." Concerning the format for the ceremonies, it was suggested that the company directors representing Honda would travel to different locations and attend the gatherings rather than host ceremonies under the company name. However, it was decided that the ceremonies would be held at the head office, as well as the respective factories and branches, in order to send Mr. Honda's message to as many people as possible.

In order to avoid traffic congestion, the ceremony at the hall of the head office in Aoyama, Tokyo, was scheduled for three days beginning September 5 for rather long hours from 10 o'clock in the morning to 5 o'clock in the evening. The schedule was published in major newspapers as a company notice on August 23.

A Ceremony Designed to Convey His Appreciation

"Products do not lie. We cannot cheat with our products."

Believing in this idea, Mr. Honda had devoted himself to the creation of every product and technology with which the company was involved. "Orei-no-kai" was intended to express his appreciation to the many people who came to bid him farewell by displaying the products and technologies reflecting his passion, along with many of the paintings that he had made in his last few years. 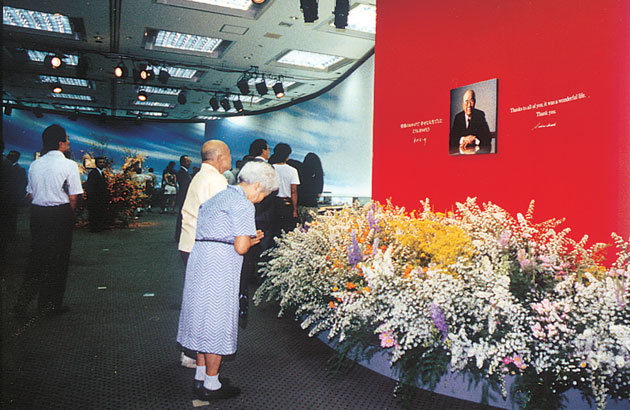 The hall at the head office in Aoyama was divided into three areas: Orei-no Ma (Thanking area), Kondan-no Ma (Meeting area), and Tenji-no Ma (Exhibition area). In the Thanking area, people were greeted by a photograph of Soichiro, looking very much as if he were about to speak. Displayed in the room were the numerous medals presented to him from various countries, about which he had often said, "I was able to receive these because of the people around me." His paintings, which Soichiro enjoyed as a hobby, sent the message he wanted to convey: that he had lived such a long and happy life. The Honda family and the company directors also expressed words of thanks to those present.

In the Meeting area, various forms of technology, including engines designed by Soichiro himself, were displayed. In the Exhibition area, the products Soichiro created along with company employees were presented. Through these displays, people had an opportunity to share Soichiro's rich sense of appreciation.

As a means of tribute to the company founder, the Orei-no-kai gathering, was unprecedented in the annals of Japan. Indeed, no such organization had ever done anything other than hold a company funeral. The organizers were flooded with inquiries from the bewildered public, who asked such questions as "Can I really come?" and "What should I wear?" 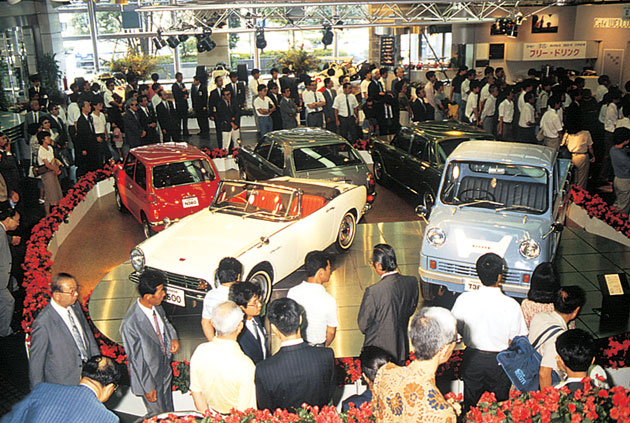 An automotive product display corner in the Exhibition area

However, once opened, the hall became crowded with many people, including men and women of all ages. These were not only people who were acquainted with Mr. Honda. There was a lady who said she was impressed by the life of Soichiro Honda, a family who loved Honda automobiles, and a young couple who were avid fans of the F-1 Grand Prix.

The head office hall in Aoyama, as well as five factories and branches, received a total of 62,000 visitors. At each hall, the memory of Soichiro was remembered in different ways: some put their palms together and prayed in front of his photograph, while others enjoyed talking about him over the displays of products and paintings. 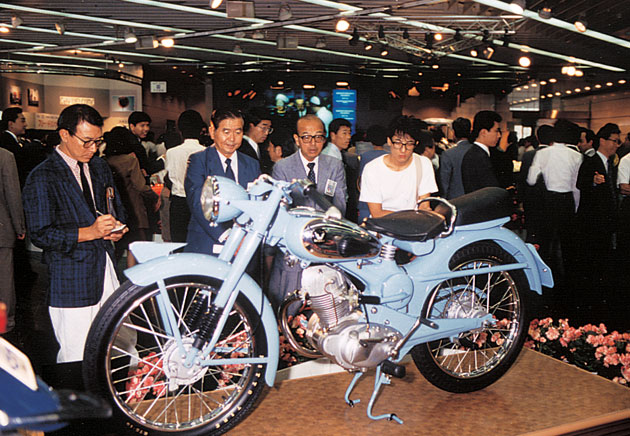 A chef at a Chinese restaurant in Shimbashi talked to the company directors of Honda using grand gestures of excitement: "This is the Super Cub I used to ride, a long time ago. I don't know anyone at Honda, but after coming here I suddenly felt like talking to somebody. So, I want to say thank you to Mr. Honda myself."

On his way out of the hall following a gracious visit, Masaru Ibuka, the founder of Sony and a good friend of Soichiro Honda, appeared to realize he had missed something. He quickly returned to the display of the generator Honda and Sony had developed together and spent some time there before saying, "I hear Soichiro telling me to keep making products . . . but not to go there and join him just yet."

When Mr. Ibuka received the sad news, he said, "I heard that there would be no funeral or wake. Soichiro left a number of things in this world, but this is the latest surprise he has impressed me with."

Masahiro Mori, professor emeritus at Tokyo Institute of Technology and a judge in the second through sixth Idea Contests, said, "He was such a brave and proud person. He disposed of all the works entered in the Idea Contest after they were judged. And when he retired, he stepped down with pride. I believe this Orei-no-kai is also the manifestation of his absolute dignity, refusing to be judged and criticized based on the values and worldly perspective of society in general."

Honda Thrives on the Public's Support

The S500 and other products with which Soichiro was directly and creatively involved were exhibited at the Exhibition area. These comprised a significant share of a large inventory of products repaired and restored in commemoration of the company's 25th anniversary, and have been preserved in proper running order since then. These products offered ample proof of Soichiro's tireless effort to achieve his greatest dreams. Like the flaming-red background color of his portrait photograph, the strong energy of the ultimate dreamer was felt by all who gathered within the hall.

Soichiro used to relate himself to every product and technology, saying that everything would become "a part of him." At the Orei-no-kai, these products and technologies spoke to the hearts of the people who loved him, warming their hearts amid the glow of Soichiro's mind and spirit.

"Thank you for giving me such a happy life. Thank you very much." This was his message to the world that he had known and loved for more than eighty years.

Soichiro lived honestly and true to his emotions. Though he would sometimes clash with people whose opinions differed from his own, he was always open to sharing his feelings. At the end of such a stubborn and resolute journey, Soichiro left us with a unique farewell: Orei-no-kai, a farewell unhindered by customs or formalities.