It was in 1976 at a school reunion when Michihiro Nishida, then a corporate vice-president, learned about the "hometown forest" theory from Akira Miyawaki, then professor at Yokohama National University. Professor Miyawaki had been Nishida's junior in school, graduating from the Yokohama Technical College of Engineering currently Yokohama National University, Engineering Department. Nishida was very excited about the idea of creating groves like those surrounding village shrines, since it was a completely new concept for him. Following Miyawaki's speech, Nishida immediately offered the professor his enthusiastic assistance.

Nishida wasted no time in buying and reading the books Miyawaki had authored. The professor's idea was essentially to plant the native tree species that had embodied the natural beauty of Japan throughout its history, and to create what we now see in the groves surrounding local shrines. By doing so, he believed it was possible to preserve the country's unique ecological matrix. Such plantings would encompass a broad spectrum of trees and shrubs, each with its own group of varieties. Nishida was fascinated by the word, "variety."

"This is just what Mr. Honda has been saying about how a company should be," thought Nishida.

Some trees are strong, yet others are weak. Tall trees are often surrounded by shorter ones that support them at the base. Similarly, there are varieties of employees within a company. To hire people having the same ideas and mindsets may at first appear very efficient, but such companies are vulnerable to change and will eventually fall from prosperity. This was the idea persistently put forth by Soichiro Honda. He believed that choosing people of diverse backgrounds and experience, and allowing them to maintain their character and opinions would vitalize the organization and make it stronger in the long run.

Inspired by the concept of diversity, Nishida believed the idea of a hometown forest would not only provide solutions for environmental problems but prove useful in managing the people within a company. Therefore, he invited Prof. Miyawaki to the company, where he could speak to the Board of Directors. Following his address at the head office, Miyawaki was asked to visit other factories and branches and give lectures there. As a result, Miyawaki's theory was gradually adopted by Honda and disseminated among its employees.

Recalls Nishida, "I simply introduced Miyawaki's idea. Once the idea was disseminated, initiatives were born and projects were started without anyone giving specific directions."

Hence, the ideal to which Soichiro Honda held so enthusiastically materialized in the form of the Hometown Forest Project.

Groves Nurtured with the Employees' Hands

Several months later, the Hometown Forest Executive Committee was formed. The committee members, who represented each factory and branch, visited various locations in their respective areas, where they studied the native flora. The results of their work were compiled into a large book that is currently under the care of the Environmental Science Center at Yokohama National University, where Miyawaki is now the director.

The successful planting and growth of trees lies in the preparation of raised beds. Thus, at each facility the beautiful rows of trees, which had already been planted in sections neatly covered with lawns and asphalt paving, had to be dug up. The lawns were stripped off to allow for the creation of raised beds. Everything was to have a new start.

"Do we really need to destroy these beautifully prepared sections?" the employees would ask. Each time an objection was raised, the committee members would speak to the employees, explaining the concept of a hometown forest in order to convey its merit.

During the year 1977, 250,000 small seedlings, each grown in 10-em plastic pots were carried into the Kumamoto, Suzuka, Hamamatsu, and Saitama factories, as well as the research center at Tochigi. The seedlings were planted in various parts of the premises, sometimes by new employees and at others by groups of employees. 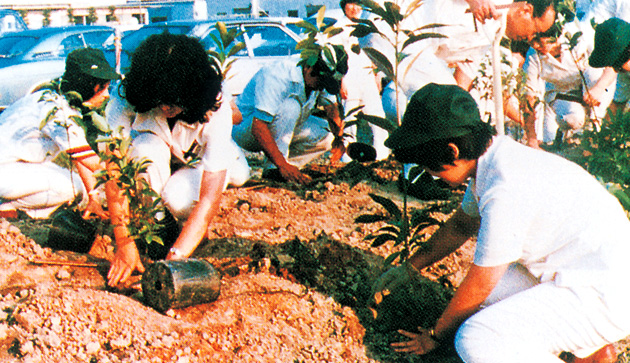 Straw bedding covered and protected the seedlings for the next three years, preventing their roots from drying out. However, the straw tended to moderate temperatures, even in winter. Rats found the material to be excellent housing and took up residence beneath it. As a result, it was found that the roots of these seedlings would be nibbled away, so the dead seedlings had to be dug up and replaced with new ones. The battle against weeds was another problem. The employees had to keep watchful eyes on the weeds, which in their rapid growth were a detriment to the seedlings. Summer watering was a daily necessity in order to protect the seedlings from the scorching heat. Sprinkler vehicles or TN mini trucks carrying drums of water were mobilized each day. In sections where constant exposure to the sun was a problem, handmade sprinklers consisting of perforated PVC pipe were installed so that water could be supplied as needed.

The committee members shared responsibility for the day-to-day management of the project, but their manpower was limited. Accordingly, the employees of various sections were often enlisted for help. Eventually things began to look up. In the third year several committee members found a nest of skylarks in the straw bedding and baby birds that had just hatched from their shells. "Nature has returned to our facility!" they exclaimed. It was truly a moment of excitement.

Soon, employees began hearing the songs of the cuckoo, and many other birds began to fly in to sample the fruits of the new groves. As a result, the seeds deposited within their droppings would sprout, becoming an endless source of surprise to the employees, who would find the kinds of trees they did not plant. The enormous power of nature was abundantly evident, giving due reward to their efforts. 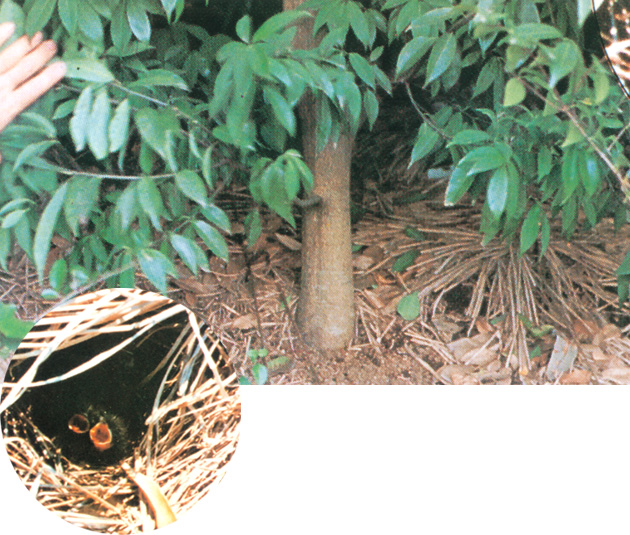 Ten years later the oak trees were laden with acorns. Canopies of leafy branches created cool shade for the employees, becoming favorite places in which to rest and relax. The groves became a natural filter, blocking out the odors and noise generated by the plant. The trees even served an important role in fire prevention.

Playing a Role in Community Involvement

Kumamoto Factory, one of the largest Honda facilities, is now imbued with the lushness of greenery covering more than half its 1.69 million square meters grounds. In 1986, the factory was given the Ministry for International Trade and Industry Award at the National Conference for the Promotion of Green Factories, in recognition of its effort to promote planting. In fact, all the employees had shared the labor of planting the seedlings and caring for their growth, much like anxious parents do for their precious children. This award signifies not only the plant's outstanding achievement in the promotion of green factories but also the commitment its employees demonstrated in the growth and care of trees.

Another of the factory's many interesting programs is "environmental school," in which employees and local residents together learn how to care for plants. Seeds from trees on the premises are planted in small pots and distributed throughout the local community. These trees indeed a part of the hometown forestplay an important role in erasing barriers, both physical and psychological, between the work site and the community surrounding it.

The hometown forest, as represented at each site, is a product of the love and care each employee gives to it. Moreover, the hometown forest is a symbol of friendship with the local community, and of the coexistence between individuals, their factory and nature.

It is a fact that green plants are this world's only natural oxygen producers. Although in the twenty years since the birth of the Hometown Forest Project there have been occasional difficulties, such as the need to prune trees that had grown to large or the need to clear away matted leaf material. The growing public awareness of environmental protection has surely been enhanced by the presence of these groves. 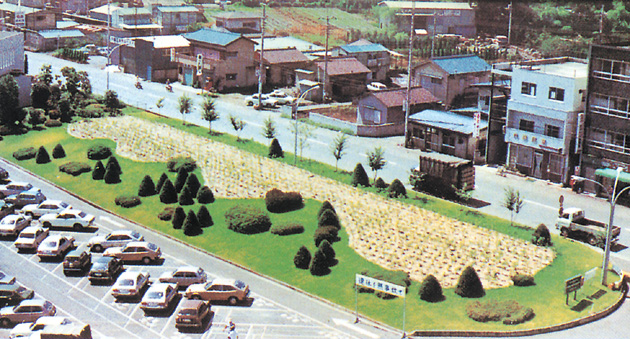 The front entrance of Saitama Factory's Sayama Plant in 1977, soon after the start of the Hometown Forest Project. The white area indicates sections covered with straw bedding in which the potted seedlings were planted. 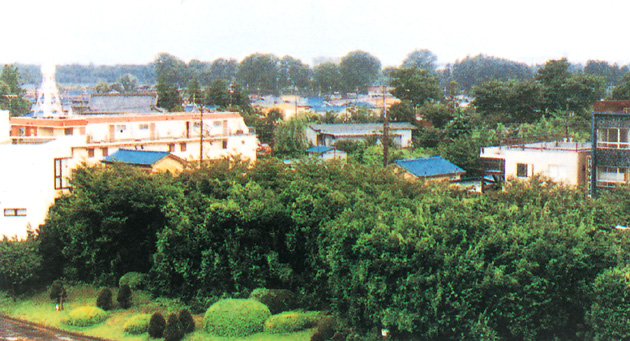 A photograph of the same area ten years later, in 1987. The trees have grown over 10 meters, creating a forest of lush, green foliage.