A Sports Festival of Dreams and Brains Evolves into "I-Con"

In July 1969, at the annual Sports Festival held at Sayama Factory (presently Sayama Plant), a gigantic ball appeared at the Idea Corner, which was a kind of a parade that featured people wearing costumes. When President Soichiro Honda saw this strange object, which measured five to six meters in diameter - with an N600 engine on top, no less - he was delighted, exclaiming, "This is fascinating! It's a sports festival of dreams and brains!" 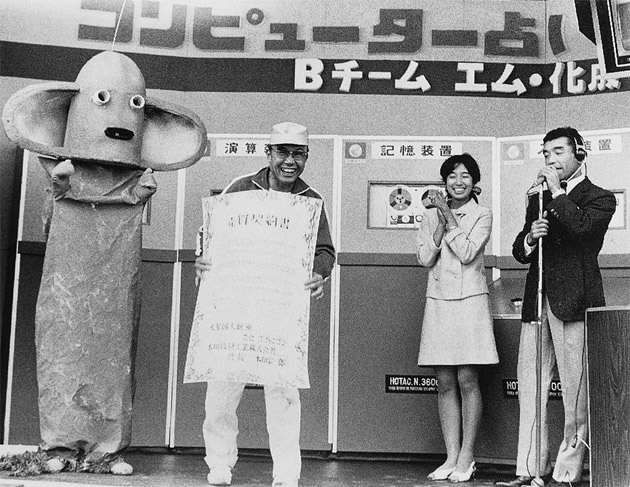 Mr. Honda (third from right) participated in Sayama Factory's sports festival, which led to the start of I-Con. He enjoyed himself with his employees at the Idea Corner. (Photo courtesy of Yukio Tanabe)

These words gave birth to the Idea Contest (nicknamed "I-Con"), and the following year the Idea Corner became a bona fide event. Eventually, it became a company-wide affair.

"We hold I-Cons because it's fun," said Mr. Honda in March 1970, at the first I-Con event, which was held at the Suzuka Circuit. "It also costs a lot of money. So, let's all work really hard."

Masahiro Mori, professor emeritus at the Tokyo Institute of Technology, sat on the panel of judges from the second I-Con in October 1971 to the sixth. He recalls, "What I remember most is Mr. Honda's words, 'We're not holding I-Con for the sake of technological development.'"

I-Con is not work; it is play. When one is at play, one does not feel as though one is being "made to do something." It is truly a human feeling, as well as a situation in which one's own initiative is important.

At Honda, work and play have equal significance. When you work, you concentrate on the job at hand, and when you play, you play all you want. As a result, play becomes a good means of working, and work becomes a good means of playing, thus creating synergy. This kind of thinking is apparent in the following address given by Mr. Honda at the fourth I-Con, held at Asaka Tech, an amusement park, in September 1973:

"Thank you for letting me have so much fun all day, today. Now, at the end of I-Con, I can't keep from smiling. I can't help thinking how great it would be if one could quietly retain such a sensation and level of excitement throughout life.

"Ever since we developed the CVCC, I've had trouble coming up with an answer when people would ask, 'Why is it that Honda was able to do something that even GM and Ford couldn't do?' But now, I think I know the answer. It is because we experience such fun times and fun efforts as represented by I-Con.

"From now on, when I'm asked such a question, I'll answer, 'Please come to our I-Con. Then you'll understand how our CVCC was created.'"

I-Con's objective is for the younger Honda employees, who tend to limit themselves to the completion of their tasks, to realize the dreams that they have cherished. Thus, during their leisure time away from work they focus on their ideas, with no predetermined rules to hinder them. Accordingly, I-Con is not about thinking whether or not something can be made into a product or put to practical use. It begins with the idea of creating something before ever giving thought to whether it is useful. The concept originates in the unique, broad-minded thinking of Honda, who had faith in finding use for anything one was going to create, as in the statement, "If it's heavy, it'll serve as a paperweight."

Because the goal is to have fun rather than simply make something into a product, all works submitted to I-Con are scrapped once the show is finished.

The Joy of Independent Thought and Creativity

Many Honda employees work on assembly lines, where they are in charge of only one portion of the production assembly. By comparison, I-Con gives them a chance to create something on their own, and to see it through to the finish. The joy and satisfaction employees receive from this is all the more wonderful, because the realization of dreams is their goal. By forming a diverse, adaptable team of individuals, the ideas expand naturally. There may be disagreements and differences in opinion, but by contributing their thoughts the employees make new friends with whom they can share the joy of creating. Through the joy of this experience, they can at last return to the origin of their humanity-to the place where we realize what it means to be human. 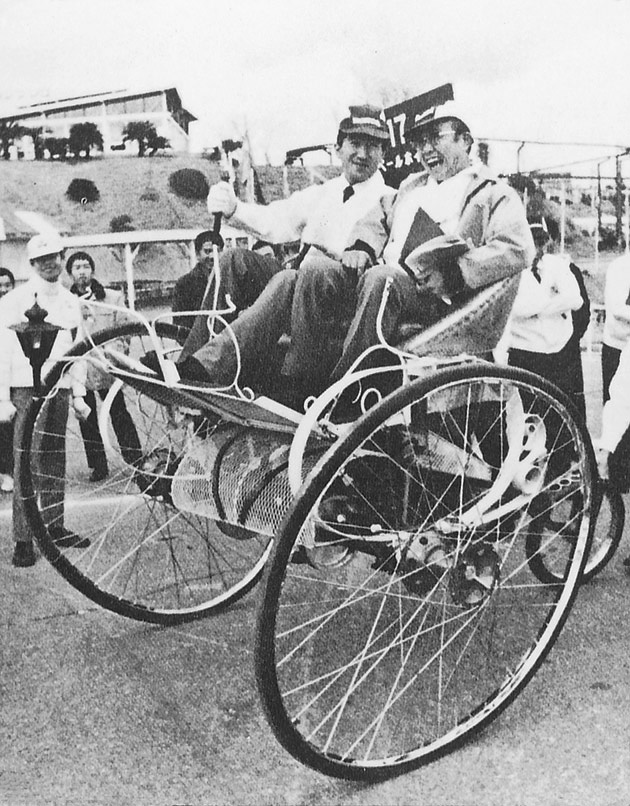 Soichiro Honda (right) enjoys a ride on the Oval Wheeler during the first All Honda Idea Contest. 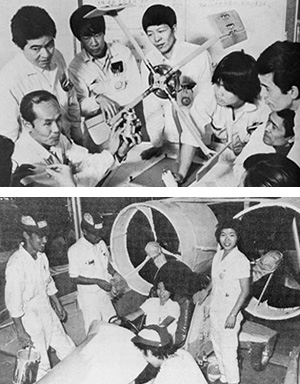 Team members enjoy creating their work for entrance in the I-Con event.

Koichi Tsukamoto, who entered more than ten works in I-Con while an employee at Saitama Factory (presently Wako Plant), says:

"At the first I-Con in 1970, our Old Man (Honda) rode the Oval Wheeler with me and was thoroughly delighted with the funny way it moved. But when I explained to him the simple mechanism, which was achieved by oval wheels instead of circular ones, he suddenly looked disappointed and got off the vehicle as if to say, 'Hmm!' I suppose he didn't like the mechanism, which was all too simple. But for us it was our first-ever experience finishing a work we created ourselves, and we had seen it move. We'd had so much fun, and were simply very happy.

"I-Con also gave us a chance to see all the other people's wonderful works. They all had such an impact on me, since they were simply beyond my imagination. It got me feeling really competitive, and I began thinking about our next project as soon as the contest was over. It was hard doing the research myself or asking other members about technologies I knew nothing about. But above all, it was fun. A month before the contest, I would start spending nights at the company, hardly sleeping at all. I enjoyed I-Con initially as pure, do-it-yourself weekend enjoyment, but eventually I became obsessed with it. I wanted to make something unlike anything that had existed in the world. I became more and more ambitious.

"What I learned from I-Con is the difficulty of realizing an idea, along with the importance of doing all you can within a given amount of time. Whenever I would cut corners, I would feel sorry afterward. I didn't learn that until much later on the job. Through I-Con I was able to experience many things, including joy and hardship, in a short period of time." 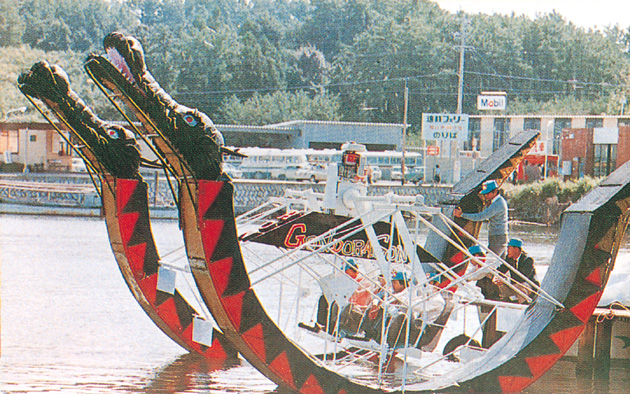 This 'Gondragon' took the I-Con Grand Prize at the second annual event, held in October 1971 at Hamamatsu Pal-Pal.

I-Con was operated as a company activity from the first through fifth events, the last of which took place in May 1975. Accordingly, the contest's popularity grew too, with the number of entries going from the initial 996 to 1,070 in the second year and 4,578 in the third.

However, the element of fun had become secondary. Instead there were more practical products having less entertaining features. As the contest became more and more like a competition among sections at various factories and branches, entrants became overly obsessed with the significance of the event. The course and objectives of the event had changed from the initial concept, in which the employees would have a chance to discover the value of personal initiative.

The operation of I-Con was therefore entrusted to the recreational organizations, beginning with the sixth contest. The company, however, remained generous in its support. Honda even went so far as to create a workshop at each factory and branch specifically for the creation of I-Con works, complete with machine tools. Production costs were covered by the recreation fund.

However, while the contest continued through the years, creativity and initiative eventually bottomed out. The results, too, became much more predictable than would have been imagined in earlier years. Neither the participants nor the audience could experience the joy they had once felt. As a result, the organizers determined that the contest would be held every two or three years rather than annually. They also endeavored to raise the quality of entries by holding a preliminary test to screen models before the ideas were to materialize.

Such measures to stimulate I-Con resulted in the establishment of rules, suppressing the freedom of ideas. I-Con had unfortunately lost its purpose. The twelfth I-Con, held in November 1991, was downsized, then the thirteenth in 1993 was canceled. That year, there weren't even "No. 1 Contests" held to choose the best work from among those selected by each factory and branch.

Due to the collapse of the bubble economy, a major reduction in recreational funding was implemented in order to fortify the company's structure. Funding for I-Con was not exempt from this change. I-Con since has been discontinued, and to this day it is dormant.

Dreams Borne of I-Con Spread to the World

The period of years beginning in 1980, when I-Con began to lose its luster, was also a period in which Honda began the overseas development of full-scale production bases, such as building an automobile factory in the United States. Some of the young people who had gained confidence through I-Con, forming a network of friends with similar interests, were involved in building the new overseas plants. Therefore, lacking the I-Con venue in which to develop and showcase their creativity, they initiated activities with their associates overseas. 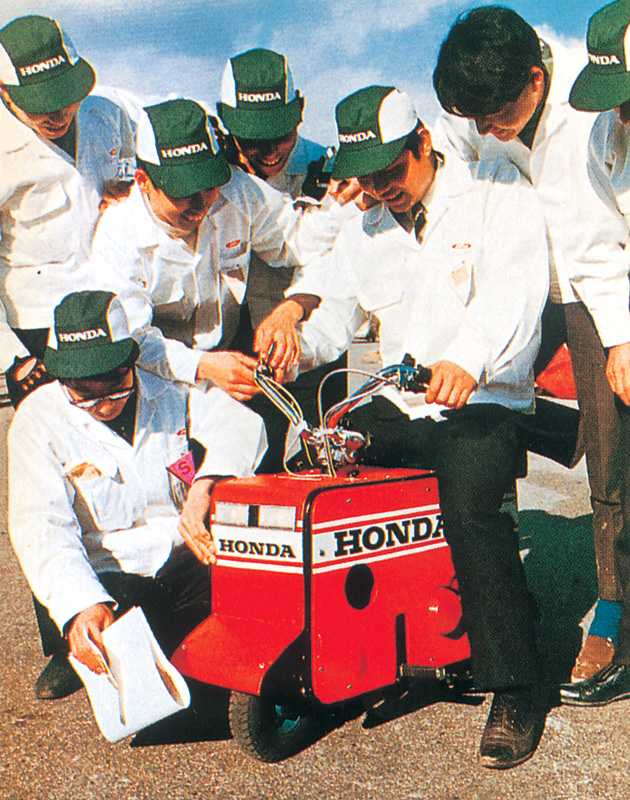 This 'Portable Motorcycle' won the President's Award at the first I-Con held in March 1970, at the Suzuka Circuit.

I-Con, with its "Let's have fun and build our dreams with your own hands" philosophy, can therefore be said to have contributed much to the company's overseas expansion. What the employees have learned through I-Con was the realization that "it is fun to have a dream, but it is even more fun to change the dream into an idea and build it with your own hands." Another truism remains in the annals of Honda; that "creating things creates people."