"Maintaining an international viewpoint, we are dedicated to supplying products of the highest efficiency, yet at reasonable prices, for worldwide customer satisfaction." (1956)

This was printed in the Honda Company News No. 23, published in January 1956.

Together with the Company Principle, it also contained "Corporate Management Policy." Both of these remain the source texts for the present statement of corporate objectives and operating policy. 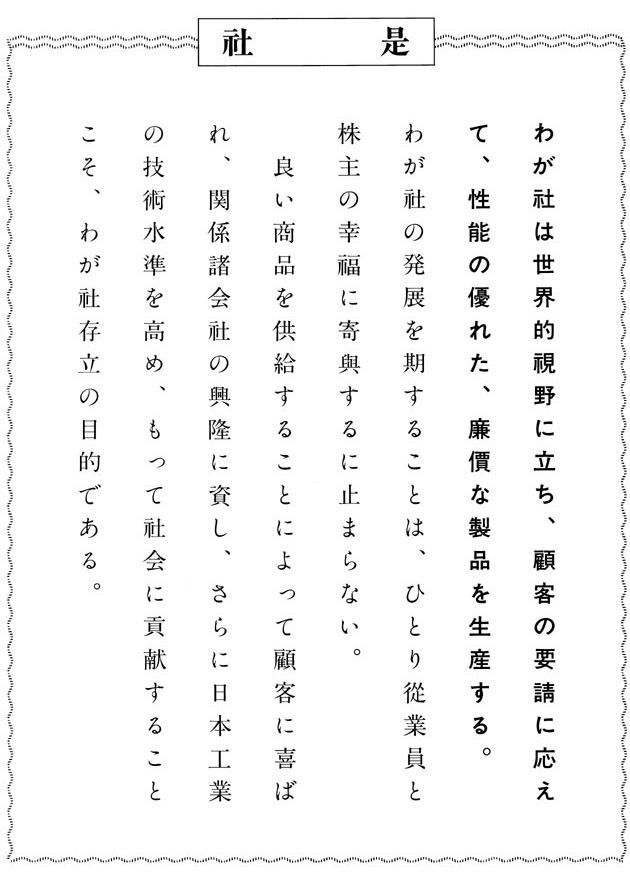 Maintaining an international viewpoint, we are dedicated to supplying products of the highest efficiency, yet at reasonable prices, for worldwide customer satisfaction.

In making our company grow, we do not expect only to bring well-being to ourselves as employees and to our stockholders.

We seek to provide good products to make our customers happy and to help our affiliated companies prosper.

Furthermore, we seek to raise the technological level of Japanese industry and to make a greater contribution to society. These are the purpose for our companys existence. 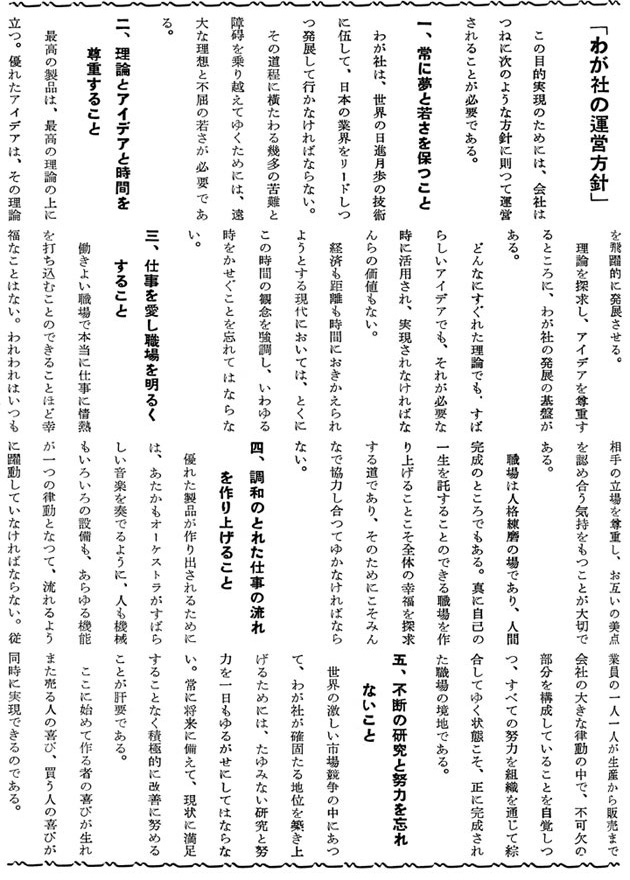 In order to achieve our objectives, it is essential that the company always operate in accordance with the following policies:

• Proceed always with ambition and youthfulness.

• Respect sound theory, develop fresh ideas and make the most effective use of time.

• Enjoy your work, and always brighten your work atmosphere.

• Strive constantly for a harmonious flow of work.

• Be ever mindful of the value of research and endeavor.

Some of the Honda veterans remember their first impression of these statements.

"I thought, they've come up with splendid Company Principle," said Kihachiro Kawashima. "That's what I honestly felt at the time. However, I don't recall whether it was posted anywhere in the company. I think it probably wasn't. Compared with the time when I entered the company, Honda had grown very large. Still, we had been hearing similar statements from Mr. Honda for a long time. 'It's no good just looking at this little Japan; look at the world,' and 'The value of a product is in the customer's enjoyment of it,' and things like that. Those things were set down very properly, and also somewhat awkwardly. For all that, though, we often carry the idea too far, and end up missing the mark of quality goods and reasonable prices."

"That Company Principle was the Old Man himself," said Kiyoshi Kawashima. "The operating policy was also from him. What he said was about making tomorrow's products for the customer, but we would often carry things too far, deviating from the Company Principle and that was the problem. Including the time of the Honda Technical Research Institute, his batting average for those 25 years was low. He either hit a home run or was struck out," he continued, laughing. "Mr. Kihachiro Kawashima and his colleagues would say to me, 'This is awful, we can't sell this. The customers haven't advanced that far yet.' However, I played a role in that myself. The foundation for our thinking, though, was laid down very well by the Old Man. That's where my generation learned how to go with tomorrow's products a little bit more skillfully. However, if we hadn't experienced that bold failure, and if we had only been building that day's products, I think Honda would have been a shrimpy little company that probably would have disappeared. If the Old Man's objective had been to be Number One in Japan, and he had taken a Japanese perspective, I have no doubt that today's Honda would not exist."

"In those days I was young and impetuous," reminisced Hideo Sugiura. "I was impudent, and I tended to be very critical of anyone who made a slip in expressing himself. When I read this, however, it was direct, simple, specific, and all in all, it wasn't such a beautiful statement of Company Principle that I would want to frame and hang it on the living room wall. I think that the passage about taking a ‘international viewpoint’ might have been somewhat of an overstatement, considering Honda's position at that time. However, that was really how the top management thought, and they were seriously attempting to put it into action. When young people like me watched our seniors acting that way and listened to them talking that way, we would get caught up in it and start doing it ourselves.

"The Old Man said what he thought from the bottom of his being and with everything he had. We were just young kids, and when he talked like that, we tended to pick it up from him and go along. The people who were young and able to follow his thinking - like Mr. Kiyoshi Kawashima, Mr. Kihachiro Kawashima, Mr. Nishida, and Mr. Shirai - stuck with the Old Man and Mr. Fujisawa, and that's how Honda's roots were formed. I mean the roots of its culture."

"I thought it was really easy to understand," recalled Kimio Shinmura. "Of course, I was one of those people who saw the cutting-edge machinery in a run-down factory building and wanted to join the company so much that I left my first job in midstream to come here. I look back now that I'm retired and realize that no other place had such a fine statement of Company Principle, and I'm impressed all over again.

"It required tremendous insight to create that statement of Company Principle. I don't think that any of the other major companies have anything similar. And then there were the 'Three Joys' with their very down-to-earth language that was even easier to relate to. There are many companies that use the Japanese character 'wa,' or peace and harmony, as a kind of decorative element in their statements of corporate objectives, but I ask you, is any company going to prosper just with peace and harmony?"

These were some of the reactions to the Company Principle among the employees at Honda then. They responded to different nuances, but everyone agreed that Honda's daily life had been transformed into that statement of Company Principle.

As mentioned earlier, the "Three Joys" that state the fundamental philosophy of Honda today made their first appearance in the Honda Monthly of December 1951.

Who might it have been, however, that first put this origin of the Honda philosophy into the written form? This had long remained a mystery until now. There have been various theories, including one that Fujisawa was the ghost writer. 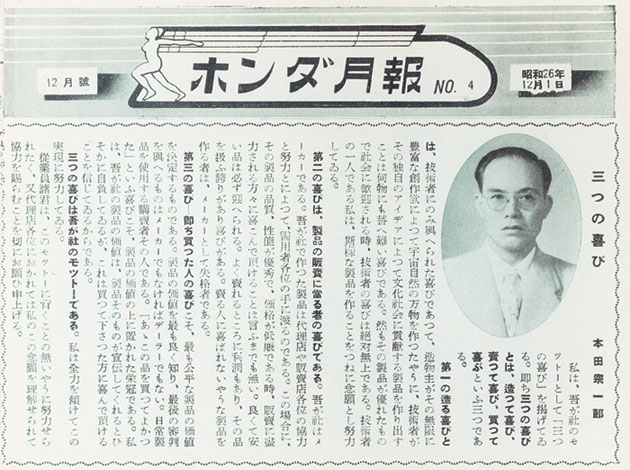 One of the company's oldest living employees, Kiyoshi Kamiya, was in charge of administrative affairs at that time.

"They had me write that," he said. "I suggested to the president that it might be good to have a company publication, what today we would call a PR magazine. That's how the Honda Monthly got started, with me as the editor. In those days, the president wasn't one to put a pen to paper himself, so I would listen to him talk and then write it down in an organized form."

That was what Kamiya told us.

Fujisawa wrote his own articles for the Honda Monthly and handed the manuscripts to Kamiya, who added:

"I simply wrote down the kind of thing that Mr. Honda was saying and thinking every day. This was well over my head, and it's not as though I thought those things up myself."

Kamiya, Honda's contemporary in age, is now over ninety years old. He has the characteristic modesty of someone from the Meiji Period (1868-1912), the time of Japan's early modernization. Until asked directly, he had never before publicly mentioned that he was the writer.

In January 1956, Honda carried out its fifth capital increase. Its capitalization was now 120 million yen.

I am presenting "The Three Joys" as the motto for our company. These are, namely, the joy of producing, the joy of selling, and the joy of buying.

The first of these, the joy of producing, is a joy known only to the engineer. Just as the Creator used an abundant will to create in making all the things that exist in the natural universe, so the engineer uses his own ideas to create products and contribute to society. This is a happiness that can hardly be compared to anything else. Furthermore, when that product is of superior quality so that society welcomes it, the engineers joy is absolutely not to be surpassed. As an engineer myself, I am constantly working in the hope of making this kind of product.

The second joy belongs to the person who sells the product. Our company is a manufacturer. The products made by our company pass into the possession of the various people who have a demand for them through the cooperation and efforts of all our agents and dealers. In this situation, when the product is of high quality, its performance is superior, and its price is reasonable, then it goes without saying that the people who engage in selling it will experience joy. Good, inexpensive items will always find a welcome. What sells well generates profits, as well as pride and happiness in handling those items. A manufacturer of products that do not bring this joy to people who sell those products is disqualified from being a manufacturer worthy of the name.

The third, the joy of the person who buys the product, is the fairest determiner of the products value. It is neither the manufacturer nor the dealer that best knows the value of the product and passes final judgment on it. Rather, it is none other than the purchaser who uses the product in his daily life. There is happiness in thinking, "Oh, Im so glad I bought this." This joy is the garland that is placed upon the products value. I am quietly confident that the value of our companys products is well advertised by those products themselves. This is because I believe that they give joy to the people who buy them.

The Three Joys form our company’s motto. I am devoting all my strength in order to bring them to reality.

It is my hope that all of you, as employees of the company, will exert every effort so that you never betray this motto. I also hope that our agents will understand my desires in this regard so that we may continue to benefit from cooperation.