In January 1953, Honda moved its Head Office and its Sales Department to 2-5 Maki-Machi, Chuo-ku, Tokyo, the site of today’s Honda Yaesu Building. That same January the company bought a 100,000 square-meter site at Yamato-machi, Saitama Prefecture, and started construction of the Yamato Plant (now the Wako Plant of the Saitama Factory). In April the Shirako Plant was completed and started full-scale production. The branch network was expanded as well, with offices in Nagoya, Shikoku, Osaka, and Kyushu.
Sales of the Dream and Cub got better and better. 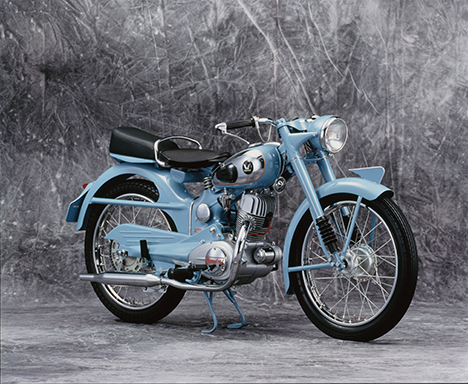 The first-generation Benly. Appearing with a 4-stroke engine and a new frame with pressed steel backbone, the Benly stumbled at its start but eventually became a highly popular model.

The slogan "120% Quality" first appeared in an article in the March 1953 issue of Honda Monthly. It was typical of Honda’s style.

"When human beings aim for 100% they will always miss by about 1%. If a customer buys one of our products that falls short by that 1%, it will mean that Honda has sold a product that is 100% defective. To eliminate the possibility of missing by 1%, we should aim for 120% quality." People who were in the company at that time would get their practical education from Mr. Honda in even more blunt terms.

"The incredible thing about him was the way he put the customer first," explained Kiyoshi Kawashima. "Because he always looked at things from the customer’s point of view, he actually became a customer himself. The slogan ‘Aim for 120%’ was so effective because it showed how he saw himself as an angry customer who had suffered because of a 1% failure."

"I was struck by the word ‘giken’ (which means research and development) which I saw in a Honda recruitment ad," remembers Tamotsu Nakano, a former member of the Board of Directors. "In January 1951, I joined the Design Department of the Tokyo Plant. But because I was an electrician there was nothing for me to do and when this was realized I was transferred to assembly. The little assembly line at the Tokyo Plant had only just started and I found myself surrounded by beginners. More experienced workers would come from Hamamatsu, give a few instructions and go back again. Because I was inexperienced I would forget things or fail to do up screws tightly enough. Whenever the Old Man appeared he would spot any mistakes - not mine but something the guy next to me had done. The Old Man would look at him as if he was going to bite him and come up saying ‘Idiot! Fool! Clod!’ and then ‘Where does your pay come from?’ ‘From the company,’ He’d reply. ‘Where does the company get its money from?’ ‘From people who buy our products.’ ‘So, your pay comes from the customers. But you turn out shoddy work – do you want to kill those customers?!’ When the Old Man talked like this I realized that his sense of humanity wasn’t just a matter of words but came from the heart. ‘Respect for human beings,’ now one of Honda’s basic concepts, has its roots in the Old Man’s idea of humanism. I never heard him say the exact words ‘Respect human beings’ but all of us had plenty of opportunities to come face to face with his concern for others whenever he gave us a talking to. And he was always very careful who he chose to launch one of his ‘thunderbolts’ against. ‘He looks promising, and if I get angry with him it might do him some good.’ In fact he himself used to say ‘A lot of people get angry because they’re nice deep down, but I’m not like that. When I see something I don’t like I get really nasty, because if there’s anything wrong with our products, it could put lives in danger. I just can’t tolerate people who don’t take their work seriously.’ So the person he’d got angry with would really feel the pressure and break out in a cold sweat. You got the message not to make another mistake. But the next day the Old Man would act as if nothing had happened and look as if he’d completely forgotten getting angry. Afterwards we realized that his ‘thunderbolts’ were meant to be educational."

Hideo Sugiura, former chairman of the Board, also remembers getting a severe ticking-off from Mr. Honda over a problem connected with the "120% quality" drive.

In April, the Cub FII-Type was launched with a 60 cc capacity that met the prevailing license requirements. In August, the Benly J-Type came out. This had an integrated engine and was a full-fledged 4-stroke motorcycle. Because it was conceived as a practical, low-cost and easy-to-use machine it was called "Benly" (from the Japanese word "benri" meaning convenient) to contrast with the "Dream." It was Honda who christened the new product.

Yoshiro Harada, who experienced the development of the Benly as a member of the engineering design team, has this to say about it:

"A 4-stroke machine with an integrated engine was a new idea. Other makers had brought out quite a few 4-stroke bikes but most bikes were still 2-stroke. We chose a more modern frame than the Dream E-Type, with a pressed-steel backbone which is more suited to mass-production. The pressed frame came in two parts which fitted together like a sandwich and were then welded together; it was modeled on a German bike. From the mass-production point of view, German bikes were more advanced than British ones and a lot of them had this type of frame. The Benly was directly based on the NSU Fox, but it certainly didn’t slavishly copy its appearance. We developed a see-saw type swing arm for it, by extending forward the swing arms from the rear suspension and mounting the engine on them instead of fixing it to the frame. The idea was to make the bike more comfortable by stopping the engine vibration from being transferred to the rider. This was pretty successful, but there were some problems. When the rear wheel went up and down, because of the see-saw system the engine went up and down as well. On a bumpy road the carburetor would shake, fuel would come bubbling out and the engine wouldn’t work well. If you banged something heavy down on the luggage rack the rear tire would hit the rear fender. Although we aimed at the ideal of 120% quality, it was no good and the first version of the Benly wasn’t a success. But we learned from our mistakes and made improvements until at last the Benly earned a reputation as the best practical bike around."

May 1953 saw the delivery to the Shirako Plant of the first consignment of the eagerly-awaited machine tools. The quality improvement systems essential to Honda’s plans for 120% excellence were gradually put in place.

In July the Saitama Labor Union was formed at the Shirako Plant, the forerunner of the Honda Motor Workers’ Union. In November, a pay structure was worked out and the company implemented its system of lifetime employment. In December, Honda carried out its fourth capital increase, bringing the company’s capitalization to 60 million yen, and work started on the construction of Hamamatsu Factory (the Aoi Plant).