"Engineering without personality doesn’t have much value" / 1947

The first of their prototype engines was the legendary "chimney" engine.

President Honda thought up a thoroughly unique concept for a new engine, and showed it to Kawashima by "drawing it on the shop floor." Crouching down and sketching out conceptual drawings on the floor was an unchanging habit throughout his life. 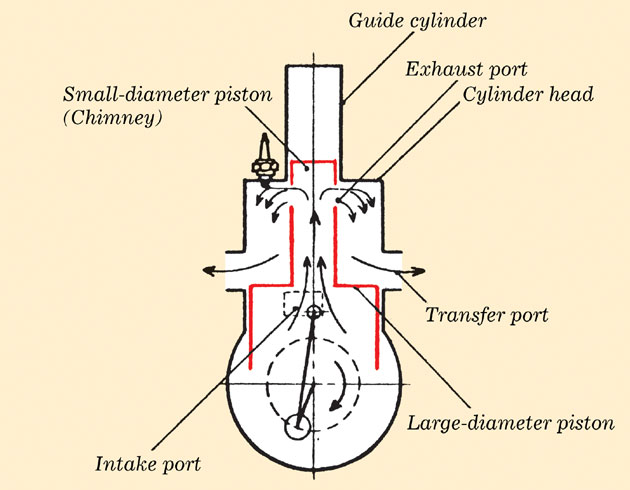 "Just in terms of business, we could have done fine by simply making copies of the engine for the No. 6 wireless radio," said Kawashima. "It pretty much had the performance we needed, after all. But by that time, he had already become the Old Man we know, and he absolutely couldn’t stand to simply make that engine the way it was. He didn’t like to copy things."

Kawashima took what President Honda had told him, and the rough sketches, and set to work on turning them into engineering designs.

Afterward, when President Honda looked at the designs from his engineers, he would invariably ask:

"What part of this is new? What part is different from other makes?"

This was always the first thing he would ask, and so it was with this first engine that he made, which differed from the conventional design.

The nickname given this engine – the "chimney" – still remains. As it suggests, both the piston and the cylinder head had a long protrusion on top, and there was an unusual central scavenging system, making for a most unconventional 2–stroke design. No such engine had ever been used on a motorcycle before.

The aim with this engine was to minimize the disadvantages of the 2–stroke and to improve performance. In other words, it was supposed to reduce fuel consumption and raise power. However, development of this engine stopped before it was put into production. The machining tolerances and materials available at the time were simply not up to the requirements of this design and, apparently, the engine had been subject to one problem after another.

The engineering drawings and prototypes of this engine have all disappeared, giving it something of a phantom presence in Honda history. In 1996, however, the chimney engine came back to life again when a replica was created for the museum of Honda product history, the Honda Collection Hall (HCH). This plan was pushed forward by Masahiro Sato, project leader for the establishment of HCH.

Takamasa Onda (presently Chief Engineer for the Honda R&D Co., Ltd.) was in charge of recreating the engine. According to him, making the engine using today’s machine working technology resulted in performance levels well beyond the other 2–stroke engines of its time, just as President Honda had thought. Onda says that it achieved low fuel consumption, in particular.

Theoretically, this was a correct direction to take. However, it failed because it was too far advanced for its time. This is something that would happen time and again at Honda Motor Co. However, when Honda stumbled and got up again, it was not for naught. It is the Honda way to take the experience of failure and later use it as the fuel for future success.