The Honda A-Type, Honda’s First Product on the Market / 1947

With the chimney engine development suspended, Honda had to hasten the work of coming up with the next plan. This turned out to be the Honda company’s first original product to be sold on the market, the Honda A-Type. Compared to the radically innovative chimney design, this appeared to be a rather orthodox 2-stroke engine. 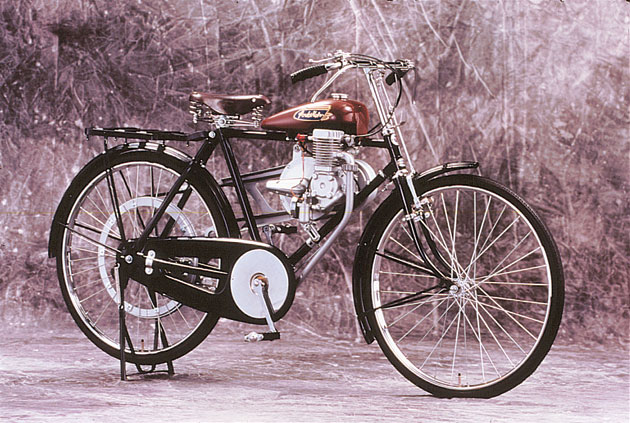 The first product to carry the Honda name was this Honda A-Type auxiliary bicycle engine. With a view to achieving mass production, the company started manufacturing the engine parts by die casting. (Photograph by courtesy of Honda Collection Hall)

However, as Kawashima explains:

"The intake assembly didn’t use the piston valves you saw elsewhere. Instead, it had rotary disk valves attached to the side of the crankcase. Therefore the carburetor was also attached to the crankcase rather than next to the cylinder. At this time, this was revolutionary. I thought the Old Man was incredible to come up with an idea like that."

Furthermore, the manually-operated belt transmission mechanism that also was used for the clutch was patented. This was just one of the ways in which this product showed itself as a true Honda Motor Co. product. The A-Type engine has not attracted much attention for anything other than its distinction in being the first Honda product. However, looking at it from another angle, it was this A-Type engine that suddenly brought out the extraordinary characteristics of Honda Motor Co.

From this time, in Kawashima’s words, Honda was already beginning to talk about it. "At our shop we used die casting. Unlike sand casting, we had to make metal dies for die casting. This costs money. At the rate we were producing our machines at that time, this couldn’t possibly turn a profit, so ordinary people wouldn’t dream of taking such an approach. They would make do with sand casting. But the Old Man insisted, ‘No matter what, we go with die casting!’" 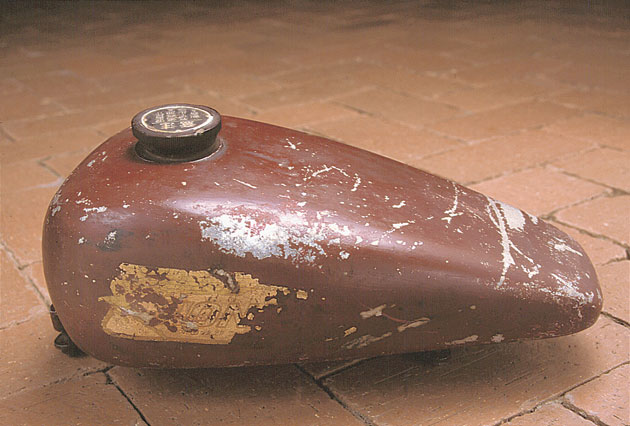 The initial A-Type auxiliary bicycle engine now preserved in the HCH originally had an aluminum fuel tank that was made by sand casting in two parts, upper and lower. In order to prevent fuel leaks through pinholes that often resulted from this casting technique, the tanks are said to have been given a coating of Japanese lacquer. The brand mark from Hondas founding period, which shows a "nude figure racing across the heavens," is still faintly discernible.

Thus, the characteristic Honda quality of the A-Type was not in its mechanism so much as in its manufacturing method.

Converting to die casting means producing in volume. Its crude little neighborhood machine shop, no matter how you looked at it, was far removed from a mass-production factory. Regardless of that, and fully aware that in choosing this production method the company might be accused of illusions of grandeur, Honda started out on what it knew was an adventure.

"It was a method of going straight from raw material to the product that did not generate metal shavings, that used less material, that cut down on the number of processes, and resulted in an attractive product. This was the President’s firmly-held view."

Isobe relates the hard work at that time:

"The ideals were ambitious, but we didn’t have the money that was the first consideration. We consulted a metal die fabricator, and found that one die would cost us as much as 500,000 yen. We had no choice but to try doing it ourselves. Well, at that time we had the President’s younger brother Benjiro and some others in the company who were able to make do with the poor tools we had and fabricate the metal dies by hand. That’s why we could do it. I gave all the help I could, too. Even if we had asked a major die fabricator to do the work for us, they probably wouldn’t have paid any attention to an unknown company like Honda."

"The initial models were only partially die cast. We did a gradual conversion so that the majority of parts in the later models were made that way. The cylinder heads, the cylinders, the crankcases, and parts you can’t see, like the connecting rods and the rotary valve seats–we die cast them all. The Old Man would say, ‘If we have to meet hardships, we might as well get it over with first.’ And, ‘In a country that doesn’t have resources, people shouldn’t do work that generates shavings. Take your pains with the front-end processes. If the back-end processes don’t require more work, then you won’t be wasting resources. If we can get the precision we need at this stage, then we won’t need the time and labor and machinery later, will we?’ When I think about it now, I see that he was foreseeing a time like today, when plasticity processing is having its heyday. We were having this kind of thinking well and thoroughly pounded into us fifty whole years back."

In November 1947, the Honda A-Type entered production and was immediately put on sale. The earlier, modified engines used a tubular fuel tank that had been nicknamed the "tea canister," but the A-Type had a cast aluminum fuel tank with a teardrop shape instead. The idea came from the cast aluminum hot water bottles that were being made by Enshu Keigokin Corp., now known as Enkei, in Hamamatsu, and Honda ordered the A-Type’s fuel tanks from that company. They could be made with things like the mounting bosses for the fuel tank caps and the fitting brackets all in one piece, so they were bound to require less work than the tea canister tanks. For President Honda, who was very particular about the attractiveness of design, the looks and style of the tank were an important factor.

Before long, original ideas began to show up in the plant facilities that were a foretaste of the Honda Motor Co. of later years. In February 1948, an engine assembly plant was newly established in Noguchi-cho. Here the company had its first conveyor line, conceived by President Honda. Operations were not on a scale to require a conveyor line, in terms either of the number of employees or the number of products. Just as with the changeover to die casting, however, the Honda dream of the future was beginning to show its effects at this time. 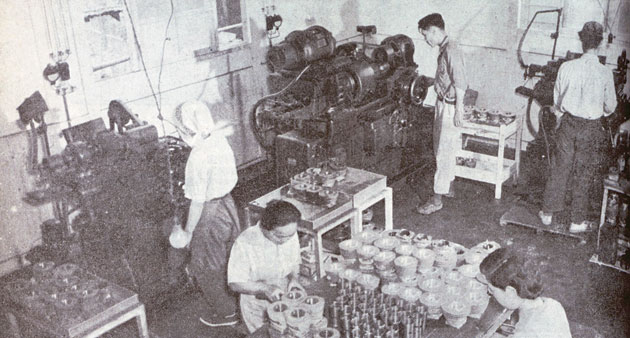 Machining the A-Type engine at the Noguchi Plant (1948)

Furthermore, this line was created with the idea of making the work less strenuous, reducing the distances over which parts had to be moved, and requiring less space. This concept of such a compact assembly line had never been seen before. The line itself was still very unsophisticated, but the basic thinking that underlay it is what Honda has fulfilled in its plants today.

Still, it was a tremendous amount of work for the employees, because the cast tanks and the die cast parts were riddled with pinholes at first. In order to prevent gasoline and oil leaks, they had to come up with the idea of putting on a coating of Japanese lacquer, a substance that causes severe allergic reactions in most people.

"There wasn’t any technology yet for impregnating things with resin. Japanese lacquer was cheap at the time. We brushed it on by hand, onto the outside of the fuel tanks and the inner surface of the crankcase. We were aiming to eliminate processing steps, and we ended up with more work, on top of which we got lacquer poisoning. It was terrible, it really got to me."

The conveyor line did not work as smoothly as anticipated, either. Intended to eliminate steps in processing, the die cast parts refused to fit together properly, so they also had to be worked by hand, after all. However, if President Honda found people doing that kind of work when he came to visit the shop floor, there would be hell to pay.

"If he saw a rack of files used to shape the parts, the sparks would fly instantly," Isobe recalls. "‘Why is the line stopped! That part is terrible, toss it out!’ But if we did what he said, we would have had to throw out all the parts. His ideal was to set it up so even the newest employee could fit the parts together, but it didn’t look like we’d reach that level for some time yet. Even though he knew this, I think that seeing it before his very eyes made him angry.

He continues: "The Yamashita Plant, where the parts were ordered and managed, also got dragged in. ‘The Old Man is coming!’ It was like an air raid alarm. As soon as we heard it, we’d quickly put away the files and hammers and any other tools we were using to fix the parts, and hide them away, then rush to get the conveyor line moving."

President Honda himself was a master of hand tooling work. He had tremendous skill as an artisan. However, as he himself would grumble:

"It’s no good if we need to have special skills or techniques to assemble our products. The plant workers and the repairmen at the dealers aren’t all like me. Don’t make something that requires a master’s touch."

"You would never hear the Old Man in those days coming out with any high-sounding lines like, ‘This is my philosophy’" Kawashima recalls. "At that time, we were listening to him without ever thinking about a philosophy. Later, though, I realized that if I thought about it that way, those things he said were all the basis for the Honda company’s way of thinking."

"The Old Man’s yelling and hitting was the old-style master’s way of handling apprentices. The things he said, though, were the opposite of the traditional craftsman’s mentality. It was the modern manager speaking, and being almost too innovative. This was a total contradiction, but for better or worse, that was Soichiro Honda. I’d say to myself, ‘Idiot!’ but I couldn’t help agreeing with him. He had that kind of effect. So I didn’t quit, after all, but kept on trying to catch up to him."