Honda has been channeling resources to the development of telematics―the connecting of people, motor vehicles, and society at large through information and communication technologies—and in 2015 developed the V2X*1 Unit, a high-performance Wi-Fi-enabled communication device.

The V2X Unit can turn vehicles into mobile communications hubs that receive and send information by connecting in real time with other vehicles, people, and roadside infrastructure. And through various demonstration tests, Honda is now working to deploy the device in a number of real-world applications.

More recently, Honda has moved V2X technology a step forward with the development of a surveillance camera that integrates into a single unit the V2X Unit, a Wi-Fi camera, and a Bluetooth receiver. The camera is serving an important role in a new surveillance service for children and other residents introduced by Kakogawa City in Hyogo Prefecture, Japan, as part of the city’s community safety and security program.

In this project, the surveillance cameras are being installed mainly along elementary school routes and in public vehicles. Data stored in BLE*2 tags, which children carry on their person, is picked up by the cameras as the children pass by. This wirelessly communicated location information along with video is then transmitted to servers managed by the city, allowing guardians and family members to check on the location of their children via a smartphone or other device.

Kakogawa City expects that, by monitoring children throughout the city in this way, the system will deter crime and enable a faster resolution of incidents, supporting its objectives to make the city a more secure and peaceful place to live. At the same time, the surveillance cameras broaden the potential of the V2X Unit and take Honda’s telematics technologies a step forward in their evolution. The system thus contributes to child safety and security, while also opening up an array of new applications.

What kind of thinking went into developing this system? We talked with Honda staff who have been working long and hard to develop the V2X Unit and expand its real-world potential.

We also met with Kakogawa City staff in charge of community safety and information policy, and with an elementary school principal who watches over children at school every day, to hear their thoughts on the city’s efforts and child security.

*1 V2X, or vehicle to X: A communication network linking vehicles to other vehicles and to people and roadside infrastructure.

*2 BLE (Bluetooth Low Energy): A Bluetooth technology standard designed for low power operation. The ability to leave devices on makes it a highly anticipated core technology for realizing the Internet of Things (IoT). 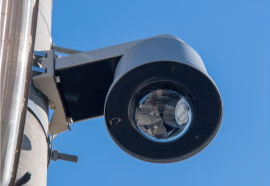 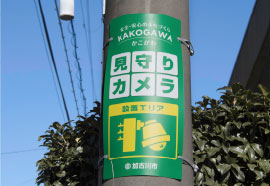 One of many Honda surveillance camera installed throughout Kakogawa City. The system is designed to help deter crime, resolve incidents more quickly, and ensure security for local residents

“It was some years ago, back when we were still developing navigation systems.”

“We were driving a car to validate a new service for Honda’s navigation system, Internavi, that would give an alert whenever the vehicle approached a residential intersection that required special caution.”

The car’s driver was Atsuki Kakinuma, staff engineer who continues to work with Oishi, now on V2X technology research and development.

“We were assessing key aspects of the alert system in connection with the introduction of so-called Zone 30, residential areas where the designated maximum speed limit is set to 30 kilometers per hour to protect pedestrians. As we were driving, a child on a bicycle suddenly rode out into the street and really scared us.”

This personal experience spawned an inner calling for the engineers: The desire to reduce traffic accidents involving children.

“We had the discussion right there in the car. It’s important to get drivers to reduce their speed in 30-kph zones using alerts. But we were wondering if we could create a function that could, at any time, detect when a cyclist or child might jump out into the street,” says Kakinuma.

At the time, Oishi’s team was about to begin developing the V2X Unit for the purpose of relaying information in emergency situations, so they had a rough vision for connecting cars and people via Wi-Fi.

“We started talking about whether Wi-Fi would enable us to detect when children or cyclists might jump out into the street,” says Oishi.

Smartphones presented one possibility for giving people mobile Wi-Fi capability. But for a car-mounted V2X Unit to receive their Wi-Fi data, pedestrians would have to keep their smartphone apps turned on when walking about. This wasn’t realistic.

“The idea was that using BLE and installing BLE receivers in cars would allow us to detect the approximate location of a signal via the car’s GPS information,” explains Oishi. “Come a day when children and people on bicycles moved about while carrying miniature BLE tags, cars would then be able to detect where they are.”

To equip vehicles with that detection ability, Kakinuma got to work developing a BLE receiver antenna with a built-in antenna amplifier. The system he built combined the V2X Unit and a car-mountable BLE receiver with an external terminal that could supply power to an antenna.

Meanwhile, Oishi’s team had also moved forward with an idea to use information from cameras. They were developing a system that employed cameras with advanced image processing capabilities so they could utilize image data taken from a car’s exterior environment as a new information service.

“The question they asked for development purposes was whether the cameras could identify vehicles in front even in whiteout conditions, where visibility is blinded by heavy snow,” says Kakinuma.

These cameras could process images instantaneously while they were recording, making it possible to see on a video screen what was happening on the road ahead, even in a whiteout. They could also, for example, correct color according to brightness, even in nighttime conditions, and thus prevent sudden overexposure from the glare of an oncoming car’s headlights. Such high-quality color video would be recorded in real time.

Through these efforts, Honda engineers built the basic system for a new vehicle communication device that integrated the V2X Unit, high-definition cameras, and a BLE receiver antenna.

Just then, Kakogawa City announced a call for bids to a new program that would use information and communication technologies (ICT) to increase city safety and security. 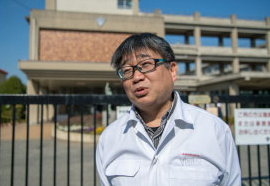 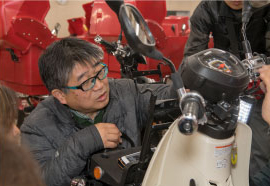 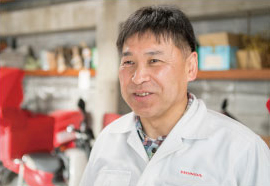 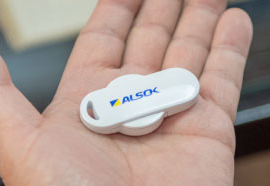 A palm-sized BLE tag by Japan's security company Alsok. Honda’s V2X Unit is compatible with security services offered by a number of companies. 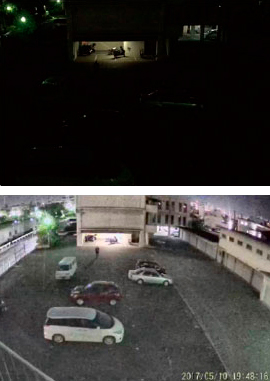