Honda has made a great variety of products since its founding—everything from motorcycles and automobiles, to power products such as tillers, lawn mowers, and snow blowers. Critical to delivering safe and dependable products to customers is the work of testing them at various stages of research and development. Honda has two key facilities in Japan for conducting those tests: the Tochigi Proving Ground (PG Tochigi), north of Tokyo, and the Takasu Proving Ground (PG Takasu), located in Hokkaido, Japan’s northernmost prefecture. Day after day, these facilities run countless tests to prepare Honda products for market. Upcoming technologies and prototypes are subjected to a wide range of conditions to answer these and other questions: Is each function working properly? Are there issues with durability? Does it handle well? Is it comfortable to ride? Comfortable to use?
The highest priority at these proving grounds is, of course, safety. “No production without safety,” a basic principle of safety passed down from the company’s founders and practiced across Honda’s global organization today, holds that safe products depend on safe workplaces and safe work activities.
In this issue of Honda Hearts, we visit Honda’s two proving grounds in Japan to talk with staff whose job is to design, manage, and maintain a safe testing environment and hear the thoughts that inspire their daily activities on the test course. We also talk with the engineers who test Honda motorcycles, automobiles, and power products to learn about the awareness they bring to test safety and the importance of testing in product development. 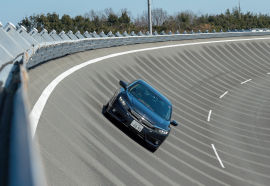 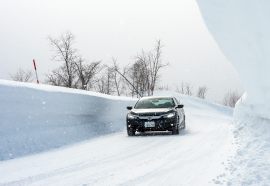 Our role is to offer this test environment safely

The history of Honda proving grounds began on the flood plains of the Arakawa River. The year was 1958, and Honda had already been test-driving its motorcycles on public roads, but now it needed a dedicated track specifically suited for developing road racers. It leased from the Ministry of Construction a parcel of land on the Arakawa River floodplain in Saitama Prefecture, which was near the company’s development operations at the time. The site’s only feature was a 1.5-kilometer straightaway.
As Honda expanded into the automobile business in the 1960s, new courses were added and other modifications made, including poor road surfaces and off-road courses. For more than a decade after, the Arakawa complex would pave the way to strong and durable Honda products.
“As cars evolved, Honda engineers began wanting a place where they could conduct the required tests whenever and as often as they needed. That’s when Honda decided to create its own test facility.”
Futoshi Hosoka, who oversees Honda’s proving ground operations in Japan as general manager of the Proving Ground Operations Division, looks back.
“They needed a dedicated location where they could do more tests—for instance, a wider track where they could drive longer distances at fast speeds.”
In 1979, the Tochigi Proving Ground (PG Tochigi) opened. Its layout and course designs incorporated lessons learned from the Arakawa site.
As basic automobile performance matured, tests had to address a growing list of factors that could influence product appeal—small movements and vibrations when driving over bumps, for instance. The number and variety of courses at PG Tochigi grew.
“Test courses reflect what engineers want. They embody the desire to try out new things, or verify certain aspects of performance with a specific type of track. But they can only be designed within the physical limits of the property. So, when the next proving ground was built after Tochigi, on a much larger property in Takasu, it was a manifestation of that desire.”
PG Tochigi is about 1.41 million square meters—enough to fit 30 major stadiums. But to test higher levels of performance in special conditions and at special speed ranges, Honda sought a test environment with a very different personality.
In 1990, the Takasu Proving Ground (PG Takasu) opened its doors. The property was a breathtaking 7.9 million square meters—equivalent to 168 stadiums. Since winter in Takasu, located in Hokkaido, has three months of temperatures below freezing, it began with cold-weather testing before gradually expanding the field to include long-distance courses and various road conditions that took advantage of the property’s size.
“Around the time Honda engineers were testing at Nürburgring* for development of the first-generation NSX (released in 1990), Honda had wanted its own proving ground in Japan for developing sports cars.”
After completing a high-speed circuit and winter test course at Takasu PG, in 1993 Honda built a 6.2-kilometer winding road course inspired by Nürburgring. From that point, as Honda engineers began tailoring products to global markets such Europe and the U.S., their test environments evolved to provide a wider variety of road conditions simulating those found in other countries. As a result, PG Tochigi and PG Takasu diverged and began to fill separate niches: the former becoming the setting for verifying basic technologies, new technologies, and new value in Honda motorcycles, automobiles, and power products; and the latter for enhancing the appeal of Honda products appeal by putting their winter performance and driving performance through rigorous testing.
“The proving ground embodies the Honda philosophy of sangen-shugi, or ‘three realities principle.’ Engineers take prototypes (genbutsu) designed at Honda R&D centers (genba) and see how they perform (genjitsu) on a test course. Our role as the Proving Ground Operations Division is to set up the test environment, to provide the courses developers need, when they need them.”
In the development of an automobile, for example, Honda has different teams for different functions—body, suspension, power plant, control technologies, etc. The Proving Ground Operations Division’s job is to coordinate use of the courses based on what kind of tests each team wants to conduct.
“We think about how to use the courses most effectively to produce the best results in development. Our main focus when doing so is safety. We always approach our job from the premise that there’s ‘no production without safety.’”
This “no production without safety” is a core principle of workplace safety at Honda, which upholds “respect for the individual” as a fundamental belief. The idea is to engage in work activities from a perspective of preventing occupational accidents before they can happen, and preventing recurrences if they do. The concept encompasses three stages, says Hosoka.
“The first is ‘provided safety,’ which comes from having facilities and systems that follow proving ground rules and manuals, and from developing an awareness of safety while on the test course. The next is the ‘safety of self-protection,’ which is the ability to respond appropriately to changes in one’s environment or circumstances. And the last is ‘self-created safety,’ which is the act of suggesting new standards or points of improvement.”
Based on this safety philosophy, the Proving Ground Operations Division aims to create a ‘world-leading test environment.’
“But it won’t be the end once we do. A safe test environment is merely the basis that allows our developers to create products our customers can enjoy.”
To do that, the Proving Ground Operations Division upgrades facilities by adding new courses or refining existing courses whenever necessary to stay in perfect tune with developers’ needs.
“By providing the know-how we’ve gained through this process as feedback for validating cutting-edge digital technologies, for instance, we hope to contribute to the development of next-generation vehicles.”
The Proving Ground Operations Division and development teams are constantly talking about and investigating whether courses are the right fit for ongoing projects. It’s that kind of rapport that allows the proving grounds to generate Honda products that are safe and easy to use.

*Nürburgring North Loop: A roughly 20-kilometer circuit located in northwest Germany that includes everything from rough and low-μ (low-friction) surfaces, to turns ranging from extremely fast to slow. Because it offers the full range of extreme road conditions, including narrow roads and a total elevation difference of some 300 meters, automakers the world over use the circuit to test sports cars and other products. 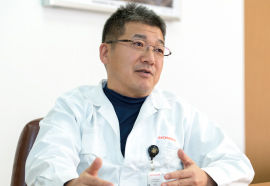 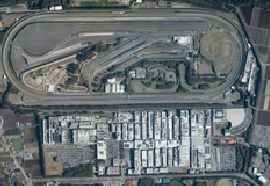 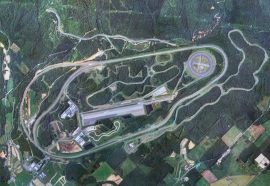