“We want to change mini-vehicles forever.” “We want to offer the best new vehicle in Japan.” These are the aims that inspired the first-generation N-BOX. Since its launch in 2011, the N-BOX has ranked No.1 in terms of mini-vehicle sales* four times in six years, transforming the market and growing into a brand with many loyal customers. The second-generation N-BOX, launched in September 2017, continues to generate strong sales.
Based on the concept of “for the happiness of families in Japan” and aiming to set a new standard for family cars, Honda renewed all elements including the car’s fundamental platform during the development of the second-generation N-BOX. It was a momentous evolution that went far beyond a regular full model change.
Throughout the whole process, the development team placed a high priority on ensuring customers could feel comfortable and secure in this new mini-vehicle for everyday living. The staff started from scratch by putting themselves in the user’s shoes to explore exactly what a family car should offer. The result was a car that offered an easy, stress-free driving performance, fitted the Honda SENSING new safety and driver-assistive system as a standard feature in all models. So what inspired the development team when designing the second-generation N-BOX? We put that question to the development managers, and the staff engaged in R&D of safety and reliability technologies. 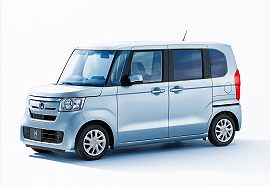 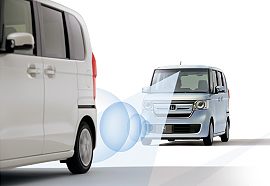 ● If mums with children feel secure in it, it will be an easy-to-drive

“We didn’t want this to be a simple model change with a different design, slightly better fuel efficiency and a few additional features,” reflects Kiyonari Shirato, chief engineer at Honda R&D’s Automobile R&D Center, and large project leader for the full model change that created the second-generation N-BOX.
“The first-generation N-BOX was an unprecedented model chosen by many customers right up to the end, so we knew we had to amaze customers with genuinely useful and ingenious progress in order to create an even strong product.” The car’s leading development began by discussing how best to advance the car, and how to enhance on the already highly praised first-generation N-BOX.
Shirato was responsible for car body development for the first-generation N-BOX. “First, I spent long hours with everyone in the team driving the first-generation model, which we had developed ourselves, so we could view it with fresh eyes.” The team didn’t drive the car on test courses, but on regular roads.
“We wanted to experience the model more acutely by assuming a range of actual user situations. We wanted to view things from the user’s perspective to help us formulate new ideas.”
The team drove through residential areas, city suburbs, highways and regional towns, either in N-boxes owned by Honda R&D or in rental vehicles. They even did a round trip between the Tochigi R&D Center and the Suzuka Factory, and drove over 2,000km in total. Getting back into the first-generation model after some time reminded the team of the model’s high quality, but also revealed some points the team hadn’t fully realized during the original development.
“For instance, the first-generation N-BOX was capable of accelerating and merging smoothly into traffic on the highway if the driver pressed down on the accelerator, but we noted the loud noise of the engine on full power. Some people might be reluctant to press the accelerator hard enough because they felt it was noisy. It was important to make the engine quieter so that people could feel comfortable accelerating sufficiently to enter swiftly into the traffic flow.”
While mini-vehicles are an everyday essential, their users might not necessarily like driving. When Shirato and his team talk about “the user’s perspective,” they refer to the many people who are not experienced or natural drivers.
“The N-BOX is a family car, which is often driven by women, who lead busy lives doing the morning housework before sending their husband out to work, dropping their children to nursery and going to work. If we can make driving a stress-free experience and cars that people can handle comfortably, then we can turn the time they spend in the car from a dreaded chore into a relaxing pleasure. That’s the kind of car we want to build.”
For those who drive because they have to, driving becomes a burden. “If we meticulously consider everything from a women’s perspective and create something women enjoy using, then it should be easy and fun for anyone to drive.”
Shirato took another significant decision based on an earnest desire to create a car that even inexperienced drivers would feel comfortable and safe using. “We decided to install Honda SENSING in all models. Not only that, we decided to launch a new Honda SENISNG function in this latest N-BOX model.”
Honda SENSING is a new safety and driver-assistive system that integrates various functions using automatic control of the accelerator, brakes, steering, etc. Honda incorporates the same level of safety technology in its mini-vehicles as its regular vehicles. The team pursued the highest level of internal appraisal standards to develop crash safety technologies based on the new platform. Equipped with these functions for rare emergency use, Shirato says it is even more important to ensure accidents don’t happen.
“Different people drive the N-BOX, including women and elderly people. For that very reason, we feel we should add more functions that can prevent even the most minor of careless accidents, and so we decided to add a new function preventing false starts when reversing.”
However, the N-BOX is a mini-vehicle. The team has to think about how to incorporate all Honda SENSING functions in this small body and achieve a high level of crash safety. “All staff across the development struggled but were committed to making it work, somehow.” The N-BOX development was fueled by the entire team’s mission to create a new standard of family car for Japanese families. 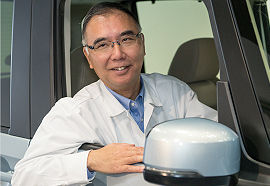 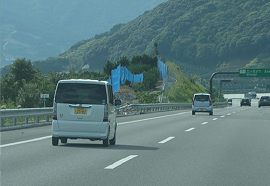 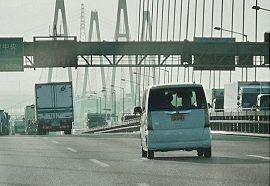