Although the number of casualties for children under 12 has been going down in recent years, over 30,000 children were killed or injured due to traffic accidents in 2015. Protecting our future generation from traffic accidents becomes even more critical as the birthrate in Japan continues to fall. Realizing the need for a traffic safety education that is tailored to human developmental stages from early childhood, Honda had developed various traffic safety education programs and teaching materials for children, named Ayatorii and Ayatorii Hiyoko (or “Ayatorii for Younger Kids”), bringing them to elementary schools, kindergartens and nursery schools throughout the country since 1994.
Traffic safety education geared to preschoolers mainly focuses on teaching them the basic traffic rules and conventions, such as how to walk on the streets, the importance of stopping, and how to cross the road. Honda started developing a program with the idea that 5 to 6-year-olds who have learned the basics can acquire better safety awareness with more advanced content. Aiming for a fun learning experience, we finished the new traffic safety education program for preschoolers called Learn Traffic Safety with Dekiru-nyan in 2016.
In this article of Hearts, we talk with staff at Honda's Driving Safety Promotion Center who developed the education program for preschoolers with the mission of creating a collision-free future in the spirit of "Safety for Everyone." We present the efforts of traffic safety instructors who are using the program to educate preschoolers in communities across Japan. 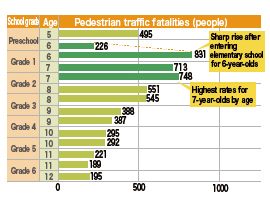 Pedestrian traffic casualties in Japan by age and school grade in 2015 (Source: Institute for Traffic Accident Research and Data Analysis) 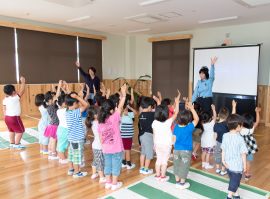 Using physical movement, the education program is designed to be a fun learning experience for preschoolers

● Honda creates an iterative program for parents to teach their children

In partnership with Suzuka City in Mie Prefecture, Honda launched a group tasked with addressing the city’s transportation problems in 1993. One of the issues faced by the group is preventing children's traffic accidents. The traffic safety education program called Ayatorii was conceived from this initiative (the name Ayatorii is an acronym in Japanese for "explain safety for easy understanding"). First developed as a teaching tool for third and fourth grade teachers, the educational program began to be offered to elementary schools in Suzuka City in 1997.
However, analysis of the city's pedestrian traffic accident data showed large numbers of accidents for first and second graders. This convinced Kazunori Aiura, one of the developers of Ayatorii from the Driving Safety Promotion Center at the time (now a technical instructor for Mie Prefectural Police Headquarters’ traffic education program), of the need to educate younger children as well. Realizing that teaching kids after they entered elementary school is too late, Aiura started developing the Ayatorii Hiyoko geared for preschoolers aged 4 to 5 years old. "My first goal was to create instruction materials for parents to teach their kids. I thought that for 4 to 5-year-old children, teaching them at home again and again is more effective than group education," recalls Aiura.
Although the basic content of the Hiyoko version, such as how to walk on the streets, the importance of stopping and how to cross the road, were fixed based on his experience developing Ayatorii, something still concerned Aiura. An expert in childhood education had told him, "With young children, if you can't pique their interest at the start, then you will never get their attention." This meant that the success or failure of the whole program rested on the program introduction. As Aiura was turning over the problem in his mind, his eyes fell on a manga scene showing a whole family listening raptly to one radio set. He hit upon the idea of using sounds with the illustrations and creating a game to guess the sound. The game involved showing an illustration of a street scene while sounds of cars, motorcycles and other vehicles, as well as sounds from daily life such as animals, telephones and road constructions, are played in turn. The children are then asked to point out where the sound can be heard from the illustration. He tried out the idea at a kindergarten, where it was received beyond his greatest expectations while the children showed better concentration. This led him to adopt the guess the sound game for the introduction of the Hiyoko version. 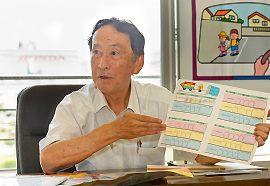 Kazunori Aiura, creator of Ayatorii and formerly from the Driving Safety Promotion Center 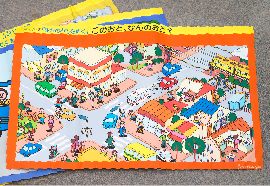 Guess the sound game, designed for the introduction of Ayatorii Hiyoko

● Preschoolers are shown how drivers see them

And so the Hiyoko version was completed in 1999 as an educational program composed of ten worksheets with the guess the sound game (a companion CD containing 30 different sound recordings is included). The program was provided to all children attending kindergartens and nursery schools in Suzuka City.
Aside from the guess the sound game, Aiura took special care in creating the worksheet showing how to walk on rainy days. The worksheet was an illustration of how a driver sees the road on a sunny day, with a transparent film overlay containing an illustration of the rain and windshield wipers that can be superimposed over it. It was designed to show how the rain makes it hard for a car driver to see the road. When small children lower their umbrellas in front of their faces, the worksheet also shows how it is not just hard to see for themselves but also for the driver to see them too. "By showing them how they are seen by drivers, I wanted children to appreciate the dangers on a rainy day if they do not point their umbrellas straight up above them and walk in a line at the side of the road. Although the traffic scenes depicted on the worksheets are simple illustrations, it makes young children aware of many different things depending on how it is used. It's low tech, but I think that is its strength," stresses Aiura.
As the Hiyoko version became known among traffic safety instructors and police officers responsible for educating people on traffic safety nationwide, they started asking the Driving Safety Promotion Center to make it available for group training at kindergartens and nursery schools. The size of the worksheets was B4 because they were made for home use. To make them usable for training large groups, the Driving Safety Promotion Center produced worksheets that are more than double in size than the previous ones and made them available to local municipalities and police. In 2010, the contents of the Hiyoko version were refined to make it easier for children to participate, such as by allowing them to show the right section of the road to use, which made the Hiyoko version more popular than ever before.
Recently, the staff of Honda Cars, Honda's automobile sales company, have also started teaching traffic safety using the Hiyoko version to the children of visitors in showrooms and events. Some Honda Cars dealerships also organize traffic safety classes by dispatching staff trained in teaching preschoolers to neighboring kindergartens and nursery schools. 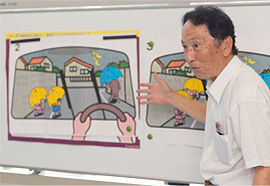 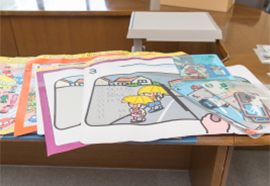 Aiura's special worksheet showing how to walk on rainy days