In May 2016 Honda released an all-new Accord featuring the world's first* traffic signal prediction system (TSPS) compatibility. The release marked the start of practical use of a new driver-assistive function that, by wirelessly connecting vehicles to roadside infrastructure and notifying drivers about traffic signal timing and other information, has the potential to enhance both driving safety and fuel economy at intersections.
In a TSPS, an in-vehicle device receives traffic signal timing data from advanced infrared (IR) beacons installed along the road (in Japan, this data is calibrated based on traffic conditions by the traffic control center of each prefecture). The device uses this information to predict whether the light will be green or red by the time the vehicle enters the intersection, and prompts the driver to maintain speed or slow down in response. By facilitating more efficient traffic flows near signalized intersections, the system is expected to help prevent accidents and reduce fuel consumption.
Through public road testing and other activities, Honda has actively led the initiative to achieve early implementation of TSPS. These efforts are part of its involvement in research and development of a communications technology-based Universal Traffic Management System (UTMS), a program of the National Police Agency (NPA) of Japan.
Energizing these activities has been the firm conviction of Honda developers who recognized the value of these systems early on and had long desired to utilize traffic signal information to enhance traffic safety and real-world fuel economy at intersections.
For these engineers, partnering with outside institutions and developing a system that communicates with roadside infrastructure posed some unprecedented challenges. For this article of Hearts, we talked with members of the development team to hear about their experiences in overcoming these unique challenges. 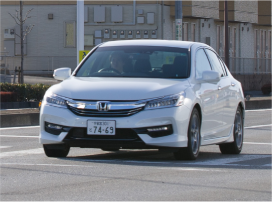 The Accord model featuring the world's first* TSPS compatibility 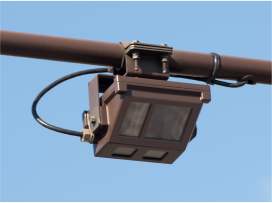 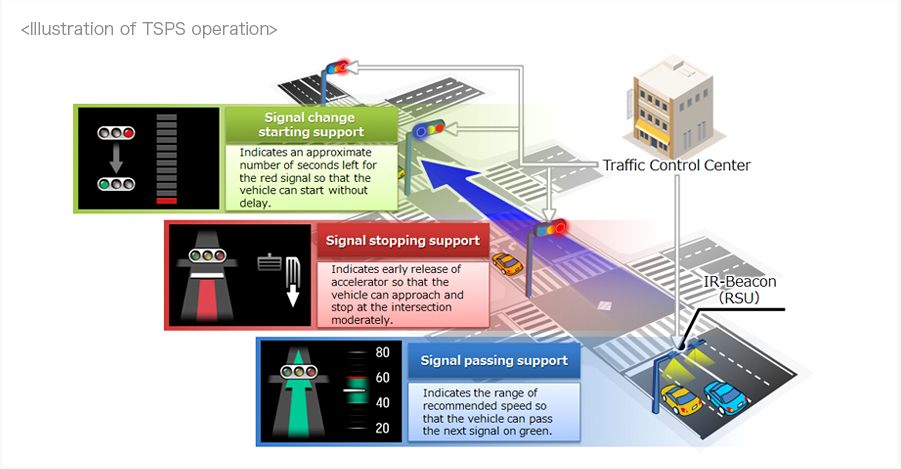 "Knowing whether you'll make it through the traffic light reduces the likelihood that you'll drive faster to get there or brake suddenly when the light is about to turn red. Extended to numerous vehicles, this knowledge has the potential to reduce the number of accidents at intersections, while also improving fuel efficiency. Those were our primary goals for this system."
Opening the conversation is Shigeru Inoue, chief engineer at Honda R&D's Automobile R&D Center who supervised the development team.
A traffic signal prediction system (TSPS) is a system that provides drivers with guidance on when traffic signals are scheduled to change, with the aim of reducing traffic accidents and improving real-world fuel efficiency. In Japan, traffic control centers managed by the police department of each prefecture control signal timing based on existing traffic loads. This traffic signal control information is transmitted to vehicles as signal timing data by way of advanced infrared (IR) beacons installed along the road. Inside the vehicle, a receiver connects with the IR beacons via near infrared waves, and uses the information to generate driving guidance appropriate for the vehicle's current location, speed, and other conditions using logic built into the car’s navigation system. The guidance is then shown on a multi-information display located inside the dashboard.
"At Honda, we provide drivers with three types of guidance: non-stop driving through green lights (signal passing), speed reduction for red lights (signal stopping), and prompt starting at lights that have changed to green (signal change starting)."
When, based on the signal timing data it receives, the equipment inside the vehicle determines that the vehicle can cross the next intersection with a green light, it displays a suggested speed range. The driver can then relax, knowing they will be able to cross the intersection before the light changes by driving within the recommended speed range. If the system predicts that the vehicle will stop at the red light, it prompts the driver to let off the gas earlier, slowing down the vehicle more gradually and curbing wasteful fuel consumption. The system will also display an approximate time until the red light turns green, informing the driver of their wait time and assisting a smoother start operation.
"The vehicle is not the only thing that makes up the TSPS; communication with the roadside infrastructure managed by local governments is an essential part. But it's inside the vehicle that the driver receives the information, so signal information can't support driving unless it is communicated in a way that's easy to understand."
In other words, while the TSPS was not something Honda could develop on its own, its usefulness depended on Honda. These two points made by Inoue were important keys to the system's development. 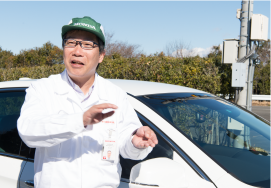 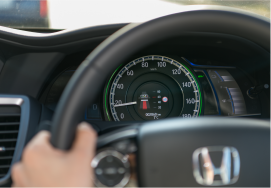 ● Research moves forward with or without infrastructure

For some time now, Honda has been involved in research and development for the Universal Traffic Management System (UTMS) program of Japan's National Police Agency (NPA). Around the mid-2000s, the UTMS Society of Japan* teamed up with Honda and other automotive manufacturers, road infrastructure developers and manufacturers, and other entities to explore the potential for traffic management systems that use information and communication technologies to help achieve safety, efficiency, and environmental objectives as part of a larger intelligent transport system (ITS).
Around the same time Honda launched an internal research team for ITS-related projects. The person they called on to lead that effort was Inoue.
Inoue already had gone through a number of R&D projects focused on control technology, from engine valve timing control to hydraulic control, to a radar-based following function that is now part of the Honda SENSING suite of driver-assistive technologies. Inoue's addition to the team was inevitable when it became clear that Honda would need a new control technology for communicating with roadside infrastructure.
"I had developed stand-alone systems before, systems that were functionally complete within a single vehicle. But now we were developing an integrated system using infrastructural data. I honestly doubted whether we would be able to realize a system that could be controlled from the vehicle."
The first project launched by the UTMS Society of Japan was research and development of a driving safety support system (DSSS). Like the current TSPS, the DSSS used communications technology. Also like the TSPS, it transmitted traffic signal information using roadside IR beacons, but for the purpose of alerting drivers to road conditions, the presence of other vehicles, and red lights in the direction of travel that are difficult to see. These warnings were given by sound and indication on the navigation screen. While developing this system, Inoue made an important observation.
"I noticed that I'd feel calmer and drive more efficiently if I knew before approaching an intersection whether the light would stay green, turn from red to green, or the opposite."
Inoue saw potential for more active driver guidance in this traffic signal information. Yet Inoue himself was a novice when it came to signal control. When he inquired with manufacturers of traffic control systems, he had difficulty understanding their explanations. And no one in his work environment was knowledgeable.
Fortunately, the right person appeared just then: Hiroki Nakajima, an associate at the Automobile R&D Center who would later become large project leader (LPL) of the project. Nakajima had experience designing signal controls at an electronics manufacturer that develops traffic signal systems―the other half of the problem.
"Our aim with signal control was smooth traffic flows, but I sensed limitations in what we could achieve without the ability to communicate with vehicles. I wanted to improve traffic conditions from the vehicle side so drivers could feel more at ease driving down the road and through intersections. So I applied for a mid-career position at Honda."
Here was an infrastructure engineer with the same aspirations as Inoue. Naturally, Inoue couldn’t fail to notice such a perfect teammate.
Delegating the research and development team to Nakajima, Inoue busied himself with reaching out to external parties to lay the groundwork for a traffic signal prediction system. He pitched the idea every chance he had. From infrastructure system manufacturers, however, he was told that current IR beacons were not designed for transmitting signal information, and that signal control technologies were not sufficiently precise. Perhaps it would be a longer road than he imagined....
Just then the winds of change began to blow.
The National Police Agency was coming up on 20 years since installation of the first IR beacons and was considering plans to replace them with more advanced versions that would feature additional signal control functions for alleviating congestion. It was just the opportunity Inoue was looking for.
"My goal was to have them add traffic signal timing information to the new IR beacons. That would allow us to develop our system."
When a TSPS working group was established at the UTMS Society of Japan, Inoue sought a range of opinions on the use of signal information for driving safety assistance. In time, the NPA granted the provision of signal information on the condition that it be used to enhance driving safety.
The proposal from Honda had the effect of dramatically increasing the viability of the advanced IR beacons, creating advantages for both infrastructure and users. With the new beacons, the NPA would gather vehicle routes, passing times, and other information transmitted from cars to the beacons (the uplink) to alleviate congestion, while cars would gather signal schedule information (the downlink) to support efficient driving.
These plans could be tested. Simulations already conducted showed positive impacts from such a system. Since building the infrastructure would take time, however, Inoue inquired with the NPA about whether Honda could test at least the in-vehicle technology on public roads. Permission was granted for public road testing on the condition that it be basic testing only. With this, the TSPS development project finally moved from paper to pavement.

*An industry group that, under the supervision of the NPA, conducts surveys, research, and development of new traffic management systems (Universal Traffic Management System) that utilize advanced information and communication technologies 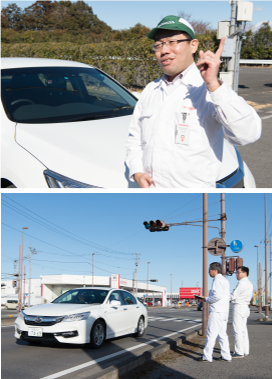 As large project leader (LPL), Hiroki Nakajima utilized his knowledge and experience with signal control to lead the development team in achieving practical implementation of a TSPS 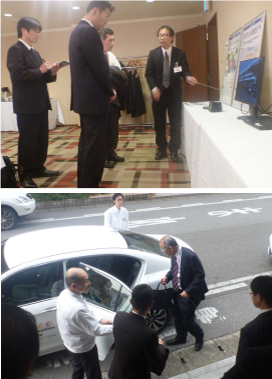