Ever since the 1960s, when it started to promote driving safety through education, Honda has implemented an array of initiatives aimed at making roads safe for everyone who uses them. Its goal has always been not only to make cars and motorcycles fun to drive, but also to bring safety and peace of mind to all segments of our motorized society, from drivers, pedestrians, and cyclists, to children, senior citizens, and people with disabilities.
Honda's support for the driving experience event featured in the following pages is one such effort. Organized by Club Tourism International Inc., with assistance from Honda since the third time it was held, this event offers the experience of driving a car to people with partial or total visual impairment. Following a specially designed program, trained Honda driving safety instructors offer driving instruction using instruction vehicles equipped with an auxiliary brake at the Active Safety Training Park at Twin Ring Motegi speedway in Tochigi, Japan.
How have the program organizers approached their work of encouraging and supporting those with visual impairment to realize their dream of driving a car? And what do the participants experience when driving? We talked with both sides to find out.

At the 10th driving experience tour, held on September 20th and 21st, 2016. A personal escort accompanies each participant throughout the program.

The seven Honda Traffic Education Centers across Japan provide enjoyable space and opportunities for motorists to acquire safe driving knowledge and skills under expert instruction. These facilities cater to everyone from ordinary people looking to hone their driving skills, to those returning to driving after a break, to commercial drivers who require training. One such center, the Active Safety Training Park at Twin Ring Motegi, is, as its name suggests, a hands-on educational facility for actively learning safe driving techniques. It offers a wide range of programs for anyone who uses the streets in some capacity, including newly licensed drivers, licensed drivers who seldom drive, senior drivers, and even children, pedestrians, and cyclists.
In September 2012, Tetsuo Shinke, then director of the Active Safety Training Park (now Manager, Business Operation Division, Suzuka Circuit, Mobilityland Corporation), received a phone call. "It was from someone I knew at the Honda headquarters in Tokyo. He said he was with someone from a travel company asking about planning a program for visually impaired people to experience driving a car, and wanted to know if I could help." Normally Shinke would be reluctant to respond to such a sudden inquiry, and about a driving program for blind people, no less. However, "I accepted wholeheartedly,” he recalls with a smile. “I couldn't get much information in a short phone call, but I never thought twice."
Honda already had a long history of extending driving support and traffic safety education to people with physical disabilities. At the time, the Driving Safety Promotion Center was even in the process of developing, under guidance from occupational therapists and various medical institutions, educational equipment for helping people with executive dysfunction drive safely again after rehabilitation. There was also a move toward promoting social welfare through driving safety education, one example being an event held at Twin Ring Motegi for people with visual impairment to practice hearing the sound of moving hybrid vehicles. "The timing of that phone call made the decision easy. I knew it was something Honda should do," says Shinke.
Hearing that event was already being held at a driving school in Ibaraki prefecture, Shinke lost no time in paying a visit. As different as a radio which emits only sound and a television with moving pictures, the event was unlike ordinary driving safety classes in every possible way, from the amount and type of information communicated, to the language used, to the level of support given to participants. Shinke found this stark difference rather inspiring. "I was convinced that Honda had a lot to gain by supporting the program. Not only would it help people with visual impairment realize their dream of driving a car, but it would also contribute to higher levels of skill, attention, and conscientiousness among Honda's instructors and administrative staff."
There were numerous challenges, of course. Despite its strong social mission, the event needed to be structured as a business to succeed long term. Instructors would have to acquire and practice new skills for working with blind people, staff would need to be trained, and the hotel on site would need to be able to accommodate guide dogs. Shinke moved forward with preparations while seeking advice from experts. He was particularly concerned about the quality of the program. "Safety and fun were two big requirements. I wanted the participants to feel the same fascination and thrill from driving and turning the wheel, the same pride and sense of achievement from having driven a vehicle on their own, as everyone else feels. I hoped that that pleasurable experience would lead to conversations about cars with their families and remind them to be more cautious when out on the street."
Shinke busily worked on preparations, believing this mindset, if held among all road users, to be an important factor in realizing Honda's vision of a safe motorized society. Six months later, in April 2013, eight people with visual impairment arrived at Twin Ring Motegi for Honda's first driving experience tour. Since then, the event has been held at a pace of once or twice a year, the number of long-distance travelers and repeat participants increasing with each time. The tour held in September this year, which had 15 participants, was so popular that it instantly reached capacity. 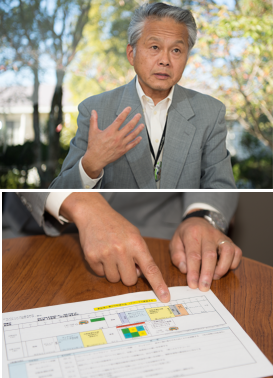