Motor vehicle-related deaths once reached shocking levels in Japan, peaking at 16,765 fatalities annually in 1970, a year known domestically as “the war on traffic.” A government and private sector-led movement for traffic safety has since brought those numbers down: fatalities have been declining steadily since the 1990s, to as few as 4,113 deaths—a quarter of their peak—in 2015. A closer look at the data, however, reveals a year-to-year rise in the percentage of senior citizens (ages 65 and older) among all traffic fatalities, which has exceeded more than 50% since 2009.
These circumstances motivated Honda researchers to examine the actual conditions surrounding these crashes. They found that nearly half of all fatal accidents involving seniors occur while they are walking. Observing that the prevention of senior pedestrian crashes would contribute to an overall reduction in traffic fatalities, in 2015 Honda launched an education program aimed at preventing accidents when seniors use the road as pedestrians.
The program, named "How to Cross the Street Safely," is designed to get older adults to think about the causes of crashes between pedestrians and cars approaching from the left on the distant half of the road (cars drive on the left side of the street in Japan), and to understand safe crossing behavior that can prevent an accident. Instruction is broken down into three segments, Daytime Crossing, Visual Field, and Nighttime Crossing, each provided as digital media and displayed by projector to aid understanding and help seniors take a personal interest in the content. For example, Daytime Crossing uses video that traces the events leading up to an accident from both the pedestrian's and driver's point of view, and shows how assumptions on both sides can lead to a collision. It also provides a video-aided street crossing simulation to help seniors perceive the mismatch between their awareness and behavior caused by age-related functional decline.
In this article of Hearts, we talk with staff at Honda's Driving Safety Promotion Center who developed the Senior Pedestrian Program with the mission of creating a collision-free future in the spirit of "Safety for Everyone." We also talk with traffic safety instructors who use the program to educate seniors in communities across Japan. 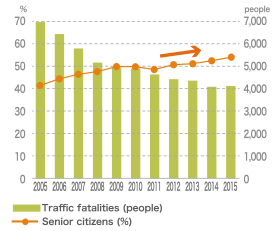 Ratio of senior citizens (ages 65 and older) to all traffic fatalities in Japan, 2005 through 2015 (source: Japan National Police Agency) 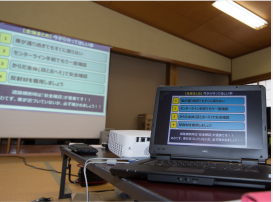 A laptop computer and projector are used for instruction

● Absent an effective education program, Honda creates its own

Honda developed its first traffic safety education program for senior citizens back in 2004. Suzuka, a city in Mie Prefecture, central Japan, was experiencing a rise in traffic accidents involving senior pedestrians and had asked Honda for advice on methods to prevent accidents through education. At the time, traffic safety education for seniors was limited to instructional pamphlets and the like; there were no in-depth programs aimed at preventing accidents for seniors when walking or bicycling.
"I had the idea that if there were none, we should create our own. And not just for Suzuka City, but for the whole country," says Kazunori Aiura, looking back on his time working at the Driving Safety Promotion Center (he is now a technical instructor for Mie Prefectural Police Headquarters’ traffic education program). Aiura was also a developer of Ayatorii, a series of traffic safety education programs for preschoolers and elementary students (the name Ayatorii is an acronym in Japanese for "explain safety for easy understanding"). Realizing he could "build on the 'look both ways before crossing' principle which is the foundation of road safety education for children," Aiura first created a prototype for the program. He then sought advice from other experts in traffic safety education, and modified certain parts to make it more suitable for seniors.
The next issue was whether traffic safety instructors in the field would use it. In Japan, traffic safety instructors are employees of local government and other concerned organizations whose job is to educate children, senior citizens, and others on safe road use. Aiura had these instructors, first in Suzuka City, then in other parts of Mie Prefecture, and finally in other prefectures, use the program to educate seniors. Aiura's observations of actual classes confirmed his decision to base the program on the curriculum for children, as many of the seniors failed to grasp the purpose or importance of stopping and looking both ways.
Aiura’s program organized safe crossing behavior into four key points: walking, stopping, careful looking and listening, and crossing straight. To convince seniors of the importance of these four points, Aiura wrote up specific methods in the form of an instruction manual that would accompany the final program. Named "Ayatorii Choju" (or "Ayatorii for Long Life"), the program was installed as a part of the Ayatorii series.
In the program, Aiura especially emphasized the fourth point, crossing straight. "When I watched seniors cross the street, I found a surprising few of crossing in a direction perpendicular to the curb. The desire to get quickly where they’re going on the other side of the street leads them to cross diagonally, which lengthens the time—and raises the risk—that they're on the road."
Whenever Aiura asked a senior to cross straight whenever there was no marked crosswalk, they would always ask the question why. The important response in this circumstance, according to Aiura, is not to answer straight away, but to get them to think on their own. One method he suggests is to have the person hold a stopwatch and time their crossing when walking straight and when walking diagonally, and then compare the two times. This process, when added, is a more compelling way to teach why diagonal crossing is dangerous. "The 'rii' in Ayatorii means 'understanding,' and this is the most important part for seniors," he says.
With the curriculum for Ayatorii Choju now complete, Honda posted information on the program to its website. Inquiries quickly started flooding in. Initially Aiura traveled to different municipalities to teach traffic safety instructors wanting to try the program. "We couldn't guarantee results if it was used incorrectly. So we asked them to take time to train," says Aiura.
The Driving Safety Promotion Center then set up a department with five locations across the country (Tochigi, Saitama, Hamamatsu, Suzuka, and Kumamoto) for promoting Honda's traffic safety education programs in each region. Called Regional Branches, these branches worked to promote more use of Ayatorii Choju for road safety education on a local level. 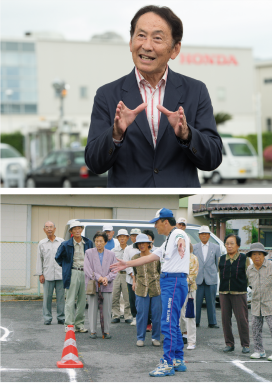 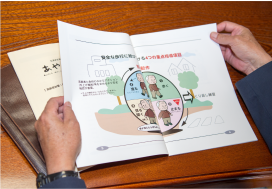 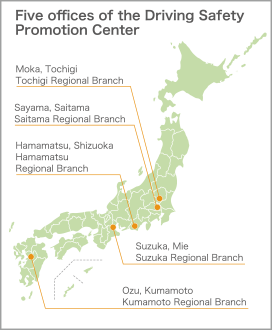