The desire to create products that are more useful to people has been the underlying philosophy of Honda's wide-reaching research and development activities since ever its founding. These efforts have also been combined with a fundamental commitment to making products safe and reliable, and with a smaller carbon footprint and lower impact on the global environment.
The MC-β is one of Honda's latest R&D efforts that follows this tradition. As a micro-sized electric vehicle (EV), it is a new type of automobile that offers new possibilities in next-generation styles of mobility. Even smaller than a mini-vehicle, the MC-β is designed for day-to-day errands and other short-distance applications. It also capitalizes on the advantages of electric drive to deliver environmental friendliness. Honda is testing this new model in real-world settings as it prepares for commercialization, having ordinary people actually use it and incorporating their feedback into the development process.
Micro-sized. Electric. Fully exploiting the benefits of these two features, while also pursuing a safe, worry-free drive for an entirely new type of automobile, requires creativity and technical know-how unlike any employed in ordinary vehicles. That is why the MC-β development team, assembled from divisions across Honda, are making use of Honda's unique strength of having engineered a wide array of products, most notably motorcycles and automobiles.
To learn more about this quest to make a commercial micro-sized EV a reality, we talked with developers in the ARD Smart Mobility Department of Honda Automobile R&D Center.
We also visited test users in Kumamoto, Saitama, and Miyakojima, Japan, to hear their impressions and ideas about the MC-β's day-to-day usefulness. 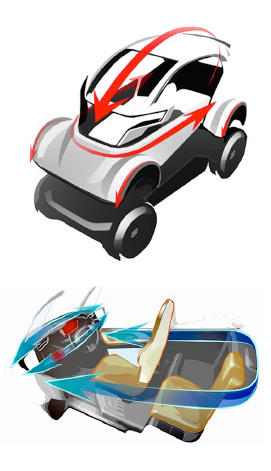 The Ministry of Land, Infrastructure, Transport and Tourism (MLIT), Japan's motor vehicle regulatory authority, is studying the feasibility of introducing micro-sized mobility as a new vehicle category. Its aim is to popularize electric vehicles as a strategy for combating climate change and building a low-carbon economy. The new category envisions automobiles that are more compact than mini-vehicles, are easy to get around in, and seat about one or two people. The Ministry expects the new category to bring dramatic energy savings, cutting energy use to an estimated one-sixth that of standard gasoline vehicles.
Honda joined other automakers in a study group aimed at developing the micro-mobility standards. As a project to introduce the new vehicle standards, Honda developed a demonstration prototype in 2013. This was the start of the MC-β.
"Developing the MC-β allowed us to make significant progress on our previous efforts to develop a Honda micro-EV," says Hisashi Murakami, chief researcher who currently manages the Smart Mobility Department at Honda R&D's Automobile R&D Center.
"I started the work of developing a micro-EV in 2012, but Honda had already begun research back in the 1990s."
Honda views mobility from an expanded perspective that includes motorcycles, automobiles, and power products. It was looking to micro-EVs to fill the gap between motorcycles and ordinary vehicles, believing this still non-existent category to have future potential. As one outcome of this work, Honda unveiled the Micro Commuter Concept, a micro-EV concept model, at the 2011 Tokyo Motor Show.
The mainstreaming of EVs is a vital solution to environmental issues, but the batteries that are a necessary part of EVs currently face technical limits, such as cruising distance. Large, heavy batteries are required to achieve cruising distances on par with gasoline and hybrid cars. Yet surveys of actual vehicle usage in Japan revealed that most day-to-day driving is done within tens of kilometers per day, and only involves one or two occupants. Micro-EVs effectively seize on the opportunity presented by these two observations.
Limiting the number of occupants to two people makes it possible to create smaller, lighter vehicles, which can be propelled using less energy. And if the range of use is kept to short, everyday distances, even small, light batteries can be sufficiently powerful. Designing automobiles smaller also takes the worry out of maneuvering on narrow streets and in tight parking spots. Just as Honda was carrying out development of a micro-sized EV based on these ideas, MLIT launched its program to promote the introduction of micro-sized mobility.
"The program provided the impetus for starting development of the MC-β, helping us to make substantial progress toward commercialization."
But the MC-β is an entirely new category of vehicle. Despite having a concept prototype, actually marketing the vehicle and putting it on the streets would require designing it with specific examples of use in mind. It would also have to be adequately equipped with basic elements of performance, such as going, turning, and stopping, as well as the core safety features known as primary safety―the proactive prevention of accidents before they occur―including a stress-free driver interface and easy-to-operate parts and controls, all based on Honda's active safety philosophy. 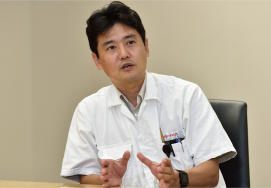 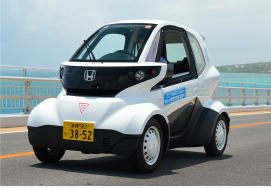 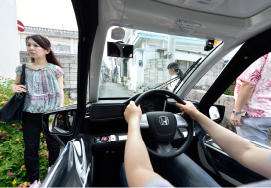 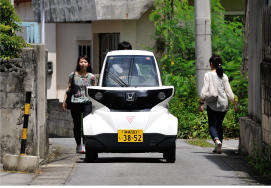 The MC-β's ultra compact size makes it easy to judge distances from the vehicle, taking the stress out of driving on narrow streets