A fun and comfortable driving experience for a mini, open-top sports car

The S660 mini, open-top sports car combines a compact body with a mid-ship engine (behind the seats) to give drivers a sense of freedom. Since it went on sale in Japan in April 2015, the S660 has received a great deal of attention, as well as acclaim from drivers.
The S660 was built with the goal of making driving fun not just for sports car enthusiasts but for everyday people. From the daily task of turning at an intersection, to sprinting from a stoplight, to merging with traffic on the freeway, Honda sought to bring the joy of driving to every situation.
Every developer involved in the creation of this car shared a common goal: to engineer a vehicle that would bring an excited smile to the face of drivers. This was natural for those working on elements, such as driving feel and design, that directly appeal to drivers. But that same goal was also in the minds of designers who developed the technology which one rarely sees and are only deployed in a collision. Equipping a vehicle with a high level of comfort allows drivers the freedom to enjoy the ride. With the S660, all engineers on the project devoted their efforts to enhancing the driver experience.
Safety and comfort are basic concepts in all Honda vehicles, and are built upon the foundation of the body frame. The S660, a type of vehicle new to the lineup, posed new challenges for Honda and required new ingenuity in the development of those fundamentals. In addition, the S660 is equipped with several new technologies, including an independently developed airbag.
We visited the Automobile R&D Center of Honda R&D Co., Ltd. to talk with staff involved in the development of the crash safety technologies of the S660.

● Simplicity for a higher rigidity and sense of security

The idea for the S660 came about in 2010. A competition for new product proposals was held to celebrate the 50th anniversary of Honda R&D, and a small sports car was chosen as the winner to be rolled out for commercial production. When assembling the development team, Honda R&D took the unusual step of recruiting project leaders from development divisions across the company. In response to a need for about 15 team members, more than 150 staff answered the call. This interest in personally contributing to the project, in trying to build such a vehicle, demonstrates just how much appeal the S660 project had for Honda engineers.
One project leader, chosen to lead collision strength and durability, was Rei Sakamoto, from Honda R&D’s Automobile R&D Center.
“I knew I wanted to take part in the project as soon as I heard about the plans for a mini, open two-seater. It was a car I wanted for myself.”
Sakamoto had previously been in charge of side crash safety tests in the development projects of the Accord, Civic, Fit, and other models, and expressed excitement about the new challenge presented by the S660 project.
Sakamoto, who was placed in charge of the crash safety team, had the conviction of someone for whom safety is a daily responsibility.
“To gain the trust our customers place in the Honda brand, we have to ensure the safety of every vehicle we make.” For this project, though, Sakamoto felt that alone wouldn’t be enough.
“I realized that we would have to use a discreet crash safety technology to keep it from getting in the way of fun driving.”
The body frame of a vehicle plays a pivotal role in performance. In the event of a collision, it bears the brunt of the impact. It also dictates body rigidity, which affects handling and riding comfort by being a key determinant of driving performance. When developing a vehicle in the conventional way, crashworthiness and rigidity both increase as reinforcement is added to the base frame. Sakamoto understood that this formula wouldn’t work for the S660.
The packaging characteristics of mid-ship engine placement and open-top design, combined with the goal of high driving performance, would require increased rigidity, in turn resulting in a thicker frame. This would also serve as an advantage to the S660 in terms of crash safety. The mini car designation, however, meant that there was no extra space to work with. Adding reinforcement would lie in the way of seat placement and space around the driver’s feet.
“Reinforcing materials are important for crash safety, but we didn’t want to do anything that would interfere with drivability.“
The teams responsible for rigidity and design worked together to come up with a structure that joins the front, side, and rear frames in a straight and curved line.
“What we wanted is a solid body, with a frame structure that is simple and also helps enhance crashworthiness and rigidity,” explains Sakamoto, going on to say that the team had been encouraged to envision a bowl of plain udon noodles in broth. Additionally, achieving such a solid body would allow for expanded options for steering and suspension settings, the elements that give flavor to the driving experience.
A simple yet strong foundation that helps enhance crash safety and the driving experience; this became the guiding principle of the development team. To reach their goal, the team had to face challenges and discover entirely new solutions. 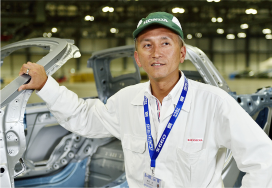 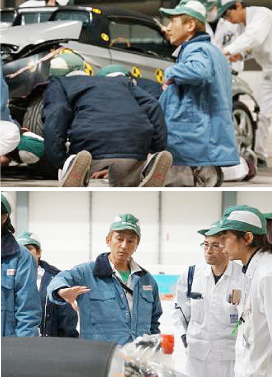 Crash tests are examined from a variety of angles