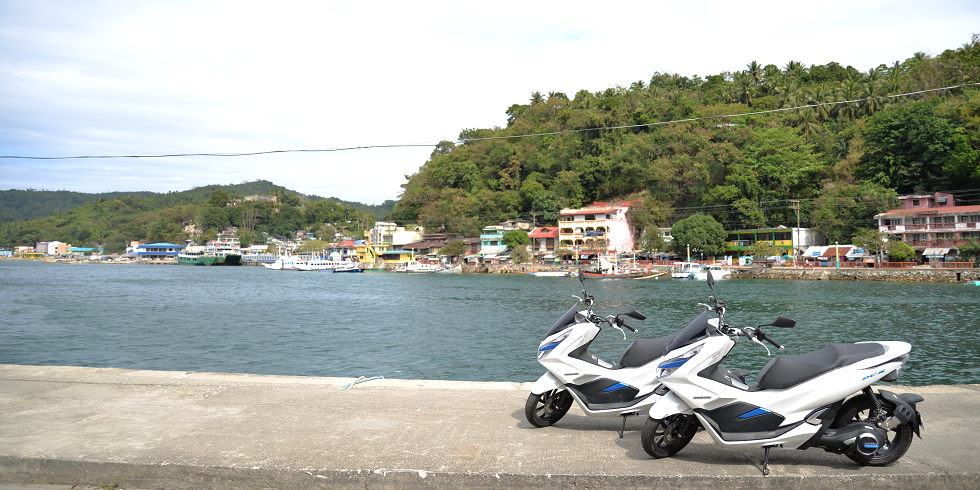 The island of Romblon in the Philippines relies on imported diesel fuel to generate its electricity. The local Romblon Electric Cooperative has sought to address this issue by installing wind turbines manufactured by Komaihaltec Inc. A demonstration project is now underway in which surplus electricity from the turbines is being stored in Honda Mobile Power Pack batteries via Honda Mobile Power Pack Exchanger charging stations. The Mobile Power Packs are then used to power roughly 100 units of the Honda PCX Electric scooter, which are being used as a mode of transport for island residents. In this article, we explore the ideas and aspirations of those involved in the project for the last several years. 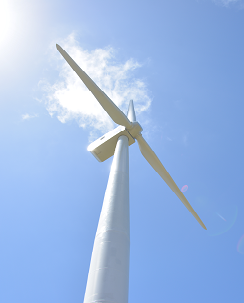 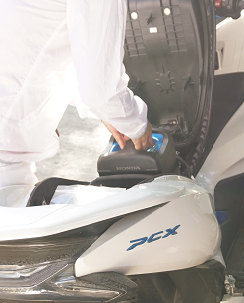 Romblon: The challenges faced by a vibrant tropical community

From Manila, the capital of the Philippines, it takes about a day’s journey, roughly 300 kilometers south by air, land, and sea, to get to the island of Romblon. Despites its small size — 87 square kilometers, with one 40-kilometer road that circles the island — Romblon is home to some 39,000 people. 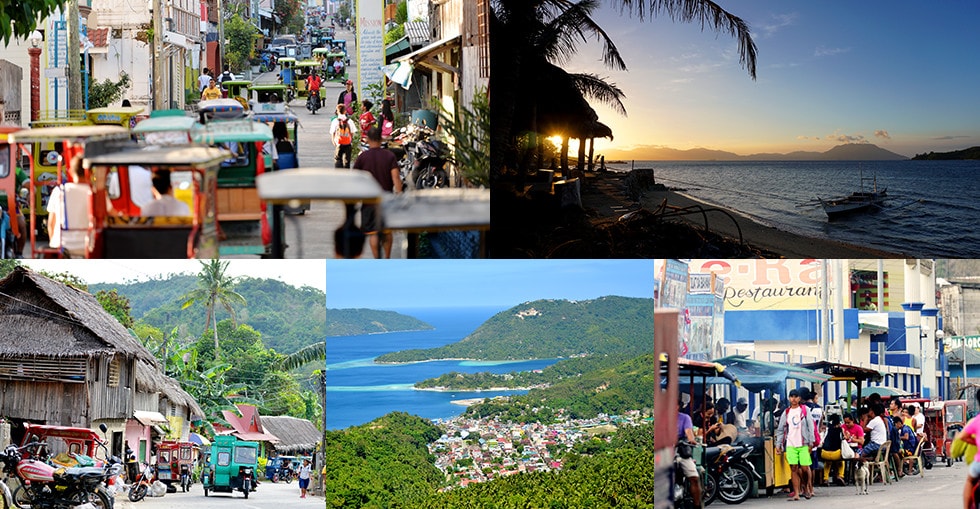 In the port town of Romblon, the capital of Romblon province, motorcycles and motorized tricycles (three-wheeled taxis), the primary mode of transportation for islanders, crisscross endlessly. The heavy traffic contrasts starkly with the pastoral image of tropical islands. Traffic jams are not uncommon in the morning and evening hours. Downtown shops and food markets are thronged with people. While the Philippines is known for its high economic growth, even among Southeast Asian countries, the bustle has spilled out even to this town far removed from Manila.

The electrical energy that supports this way of life for the people of Romblon is generated on the island using diesel fuel.
Because diesel generation doesn’t require large-scale facilities, it’s a convenient method for producing electricity on low-populated remote islands such as Romblon. The fuel needed to generate the power, however, must be transported by ship. Not only does extra cost get passed on to residents through higher electricity rates, but it’s also risky: any cancellation in shipment due to bad weather or other conditions could cause fuel supplies to run out, triggering power outages.
This energy risk has been an issue for Romblon for many years. Moreover, on average, diesel also emits more carbon dioxide during generation and has a larger environmental impact than other thermal energy sources such as natural gas.

Raising quality of life for island residents through energy self-sufficiency

On February 10, 2019, a ceremony was held on Romblon celebrating the launch of a demonstration project* by Honda, Komaihaltec Inc., and the Romblon Electric Cooperative, Inc. (ROMELCO). The project would aim to meet approximately 20% of the island’s electricity needs with wind energy, an abundant local resource. It would also use the surplus electricity, generated mostly at night, to power approximately 100 electric motorcycles, which would provide a mode of transport for island residents. In this way, the project would cover a portion of the island’s energy needs, including transportation, with renewable energy.

Three wind turbines manufactured by Komaihaltec, each with a generation output of 300kW (900kW total), were installed on the island. Erected on the ridgeline overlooking the town, the turbines convert island breezes into electricity. This clean energy is then supplied to residents across the island via the distribution grid managed by ROMELCO.
Surplus electricity generated by the wind, primarily at night, are stored in Honda Mobile Power Pack detachable portable batteries through Honda Mobile Power Pack Exchanger charging stations set up by Honda on the island. The Mobile Power Packs are then installed in PCX Electric scooters used by island residents as a regular mode of transport.

Hideo Sakaki, assistant manager of the Energy Management Department in Honda’s New Energy Business Development Division, has been making preparations for the project for the last two years. He explains how Honda’s “generate, get connected, and use” concept for electricity has become a reality in a setting like Romblon.
“The current pilot project has two goals. One is to address energy risk, which has been an issue for Romblon island for many years. The other is to reduce carbon dioxide emissions. To achieve these two goals, we’ve introduced the PCX Electric, which is equipped with the detachable battery and will be used by people on the island in their day-to-day lives. As a result, we hope it will help create a higher quality of life for everyone.”

*This project was selected as a grant recipient by the Japan Ministry of the Environment for its Financing Programme to Demonstrate Advanced Low-Carbon Technology Innovation for Further Deployment in Developing Countries (in FY2017-2018). 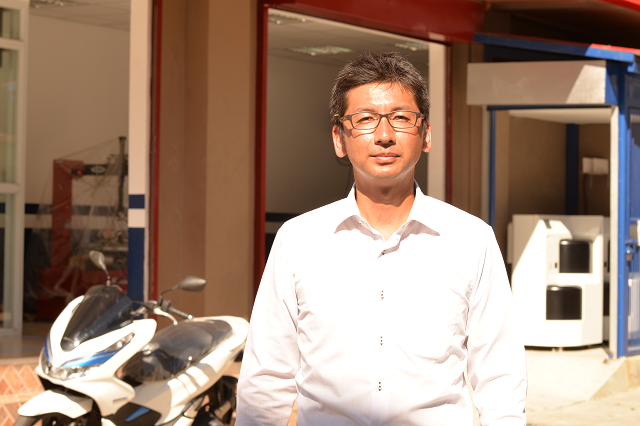 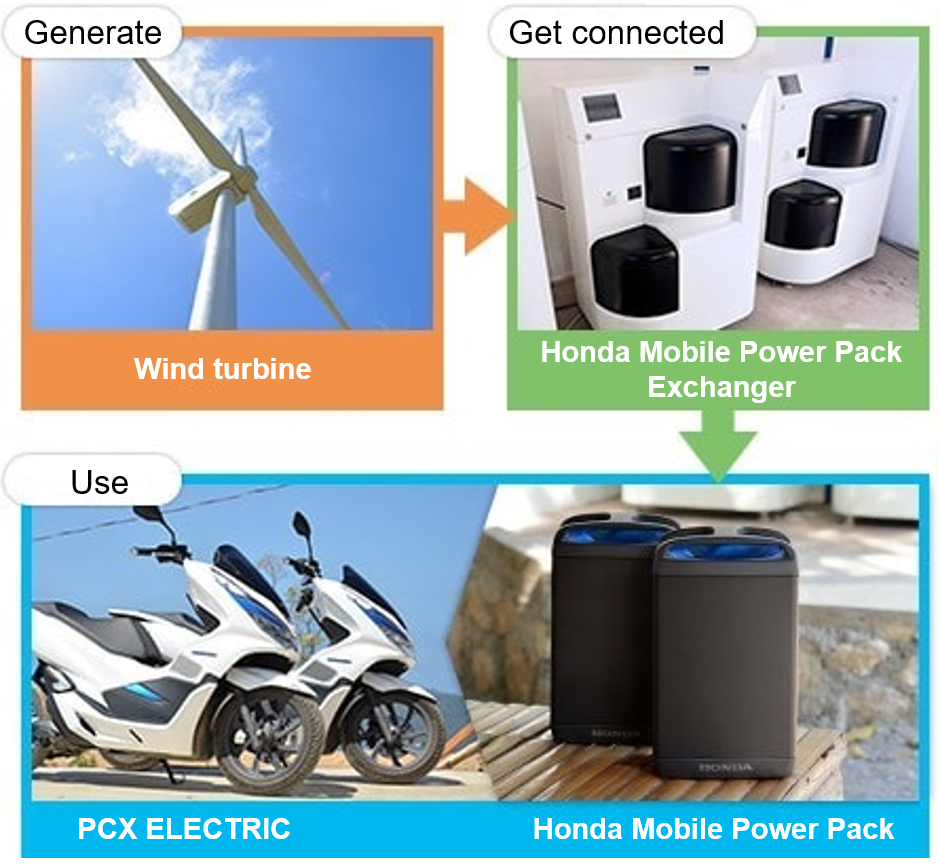 The “generate, get connected, and use” concept for electricity on Romblon island