The Honda Kumamoto Factory manufactures a wide range of products, including the aluminum frame for the fully redesigned Gold Wing. As the global hub of Honda casting manufacturing, the factory’s Die-Casting Department decided to expand its heat treatment furnaces, but on the condition that the new system deliver a high energy performance that could serve as a model for other Honda factories worldwide. Turning down a proposal from an equipment manufacturer for a new system with 20% energy savings over the existing system, they brainstormed and tested many new ideas, and came up with a “heat source hybridized” heat treatment system with an energy savings of 39%. Their unorthodox idea of using both gas and electricity as a heat source, and the energy savings it provided, earned them Japan’s top honor for energy conservation in 2018. 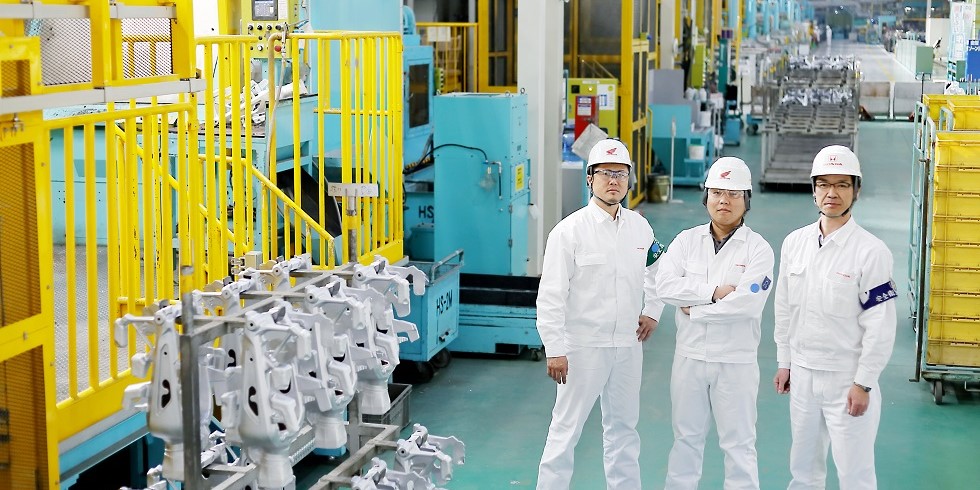 The Gold Wing is Honda’s flagship motorcycle. It’s sold in more than 70 countries and regions to date and has captured the hearts of motorcycle enthusiast the world over. In April 2018, the all-new Gold Wing — the first in 17 years to undergo a complete redesign — was released at Honda dealers across Japan.
Aluminum is used throughout the frame of the all-new Gold Wing, creating a more compact body and cutting roughly 40 kilograms of weight. It has also contributed to an impressive boost in fuel economy, from 20 km/L to 27 km/L (steady state fuel economy at 60 km/h).

Its role as global innovator is not just technical, however.
“Kumamoto Factory carries out various initiatives to increase its solar and renewable energy use, take better care of water resources, and in other ways raise its environmental performance. Moreover, each department develops their own environmental and energy solutions by gathering unique ideas from associates working on the factory floor. Sharing the best practices that are brought to life through this process is another part of the factory’s global role.”
Summarizing the factory’s initiatives is Yutaka Nakagiri, manager of the Facilities Control Department in the Production Operation Division and also a “general environmental administrator,” an associate tasked with coordinating environmental projects at the factory. As Nakagiri explains, Kumamoto Factory is also a global leader when it comes to energy conservation and environmental management. 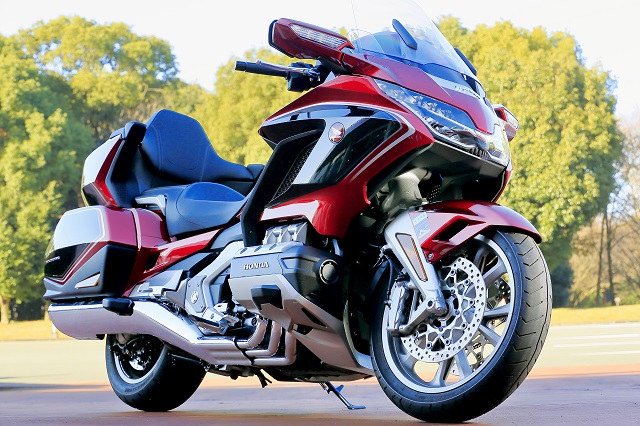 The Gold Wing, Honda’s flagship motorcycle, received its first complete redesign in 17 years. Photo above is a Gold Wing Tour. 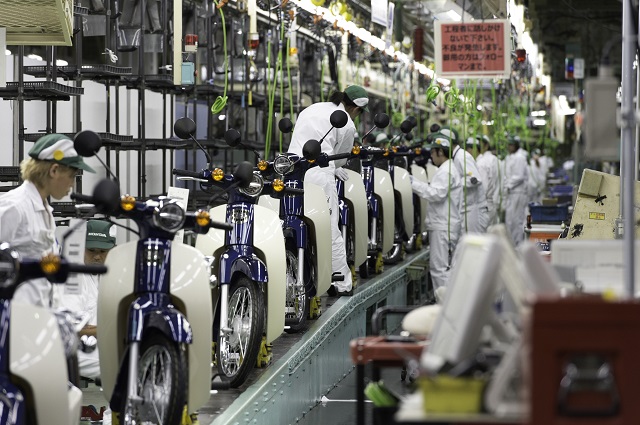 In addition to large touring bikes such as the Gold Wing, Kumamoto Factory manufactures various types of motorcycles including the Super Cub (photo) and even power products. 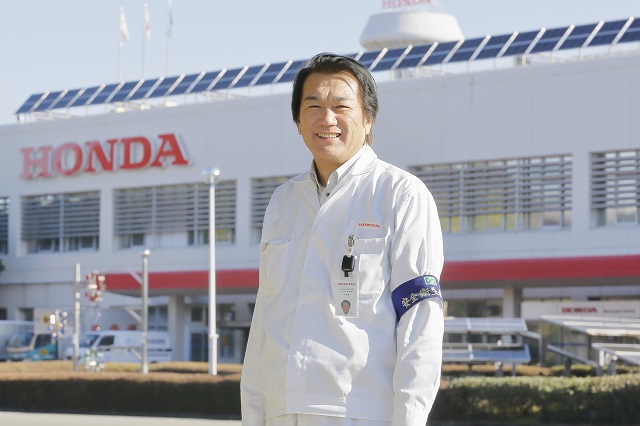 The all-aluminum frame is a major contributor to the Gold Wing’s light weight, compact size, and improved fuel efficiency. The aluminum parts that make up that frame are produced by a process called “casting,” in which molten aluminum is poured into a die and then hardened by cooling.

In Kumamoto Factory’s Die-Casting Department where aluminum casting is performed, three types of aluminum casting methods are used depending on the shape, size, and other characteristics of the parts to be cast: gravity die casting (GDC), high pressure die casting (HPDC), and low pressure die casting (LPDC).
After casting, the department also carries out “heat treatment,” a process of heating and then cooling parts to obtain the specific strength, ductility, and other properties desired for the final product. This process consists of three steps — solutionizing, quenching, and aging — all of which use gas as a heat source. 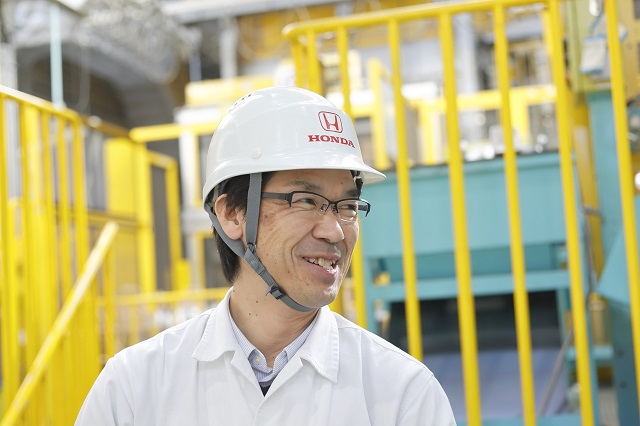 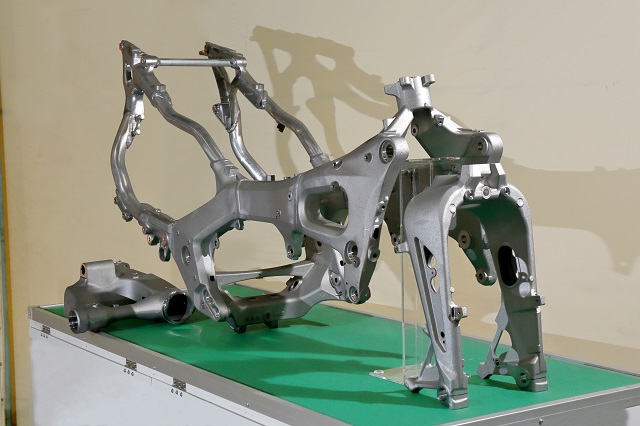 The complete redesign of the upcoming 2018 Gold Wing was also the occasion for a change of production systems. Parts integral to the motorcycle’s body, such as the frame and front fork (the part that stabilizes the front wheel), would be manufactured by GDC. Because these large, intricately shaped parts required a high degree of technical expertise in their manufacture, Honda decided to produce them in-house at the Kumamoto Factory rather than at a third-party manufacturer.

But that decision created a new problem.
“When we simulated the load associated with overall production including new Gold Wing, we discovered that we couldn’t do it all with our existing GDC equipment,” says Eiki Matsuura, manager of the Die-Casting Department, explaining the circumstances at the time.

Coming to terms with these results, Matsuura decided to launch a project for the expansion of GDC output capacity.
“The Die-Casting Department has always used a lot of energy, and our heat treatment furnaces consume the most energy of all. Taking the scheduled expansion as an opportunity, we set a few requirements. Not only must the new system enable more efficient work and higher productivity, but it must also save energy on a level that sets an example for production sites outside Japan,” he says.

And so, the Die-Casting Department set out to design a system that lived up to Kumamoto Factory’s reputation as a global innovator.

Next - From gas to electricity: Freethinking associates propose change of furnace heat source