How far can you drive on a liter of gasoline? In the Honda Eco Mileage Challenge, everyone from junior high school students to working professionals compete to see who can get the most mileage out of their fuel. Without the usual roar of engines echoing across the track, this is a quiet motorsport for the ecological age, where the passions of two groups of people meet: the participants who are determined not to waste a single drop of gasoline, and the organizers who support them. 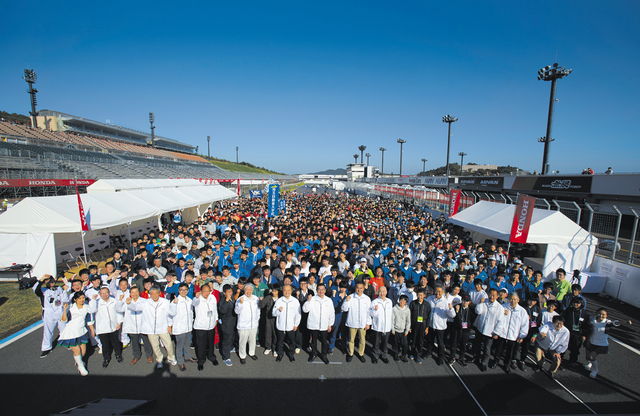 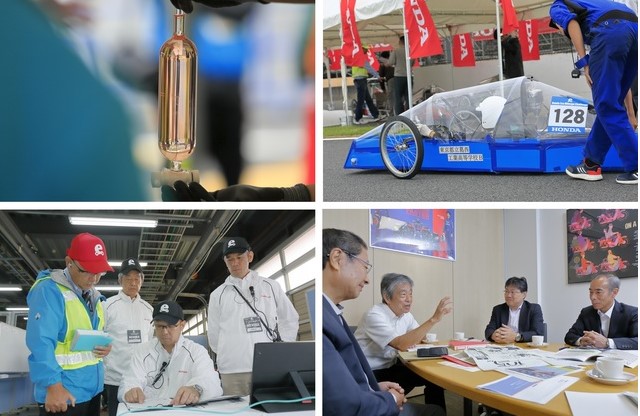 Do you know a motorsport in which drivers compete not for speed but for fuel efficiency?

You won’t hear the exhaust notes that “motorsport” typically calls to mind. The only sounds you hear are tires meeting the pavement and the intermittent start of a 50-cc engine.

There’s a reason this race is so quiet it can seem underwhelming at first: Hoping to maximize on fuel economy, many teams employ a “coast and burn” technique, switching off their engine periodically during the race. The machines are also uniquely shaped; many are so small and low to the ground that they barely fit the driver. It’s the spirit of invention toward saving fuel that captures one’s attention in this eco-race, and that lies at the heart of the Honda Eco Mileage Challenge.

People across multiple generations compete, from junior high school students to working professionals. Each team races with a machine they designed and built themselves, powered by a Honda 50cc four-stroke engine,* the kind used in the Super Cub and other Honda motorcycles. There are seven racing classes, divided by age group and type of vehicle, including two-person vehicles and motorcycles. Besides the national competition held at Twin Ring Motegi speedway in Tochigi Prefecture, the Eco Mileage Challenge is also held regionally in Japan and in other countries such as China, Thailand, and Vietnam. 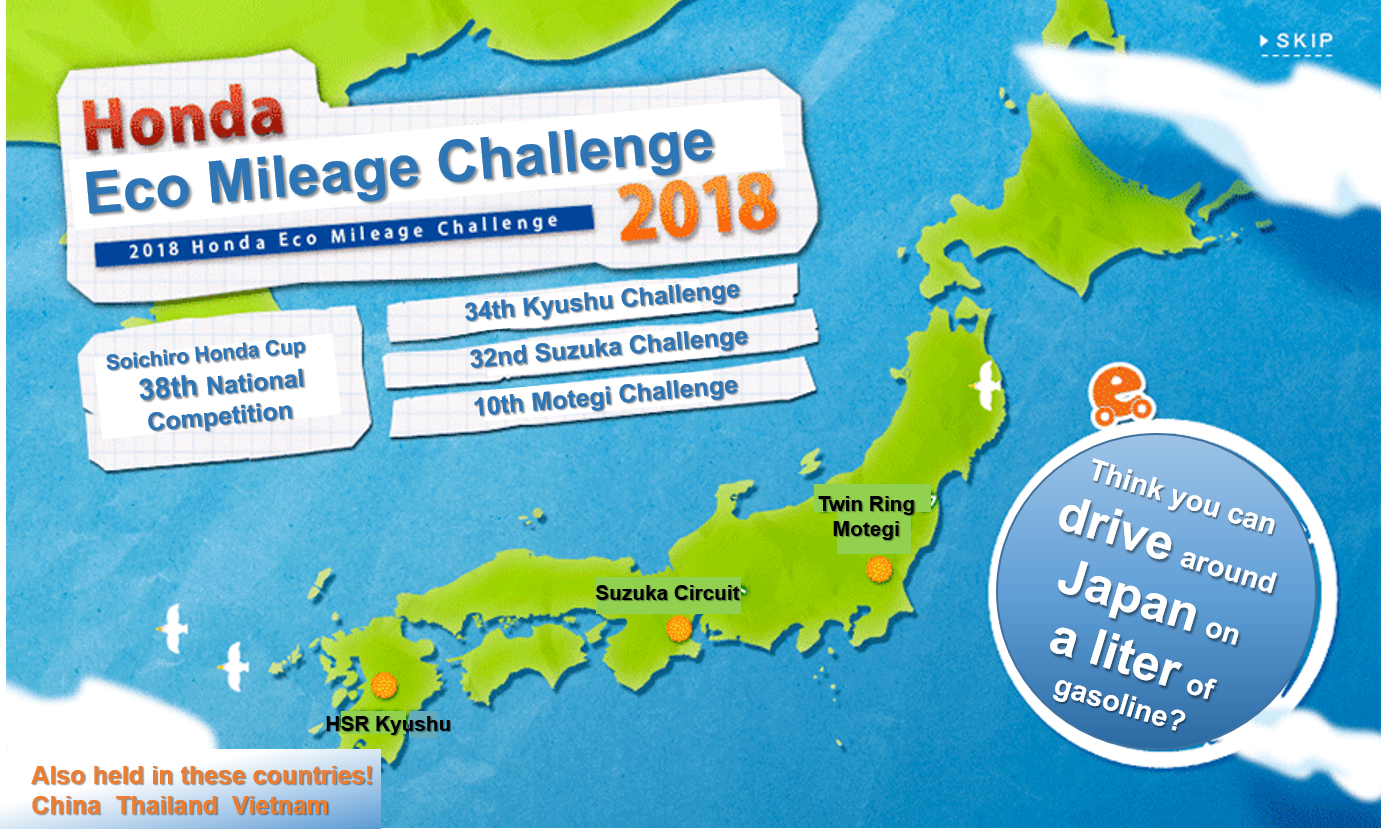 The Honda Eco Mileage Challenge promotes itself with the catchphrase “Think you can drive around Japan on a liter of gasoline?” 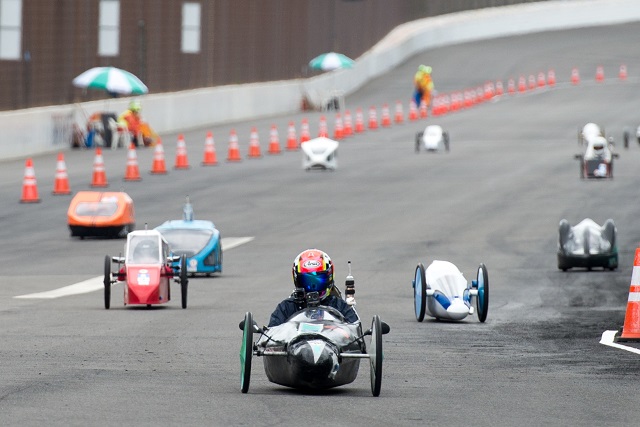 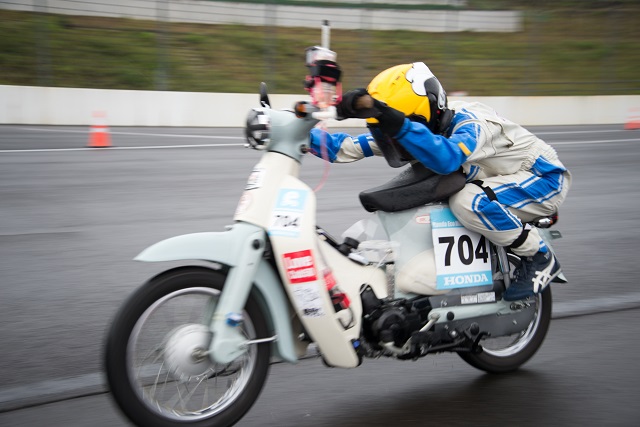 In the motorcycle class, vehicles are based on a production model with a Honda 50cc four-stroke engine. This riding posture for maximizing fuel economy is quite unique.

The current record for highest fuel economy is a jaw-dropping 3,644.869 km/L, set at the Japanese national competition in 2011. Responding to the catchphrase “Think you could drive around Japan on a liter of gasoline?” each team strives to break the record and push their fuel economy to the extremes of what’s possible through efficiencies in engine and machine structure, body shape, and driving method.

*Only the New Challenge class uses Honda four-stroke engines between 50 and 150cc. 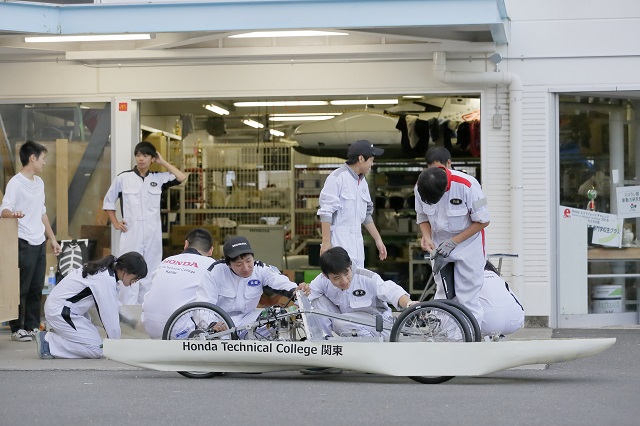 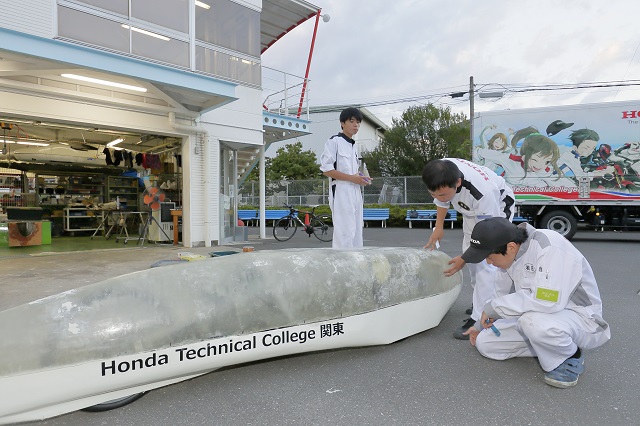 The cowling is designed and built from scratch. The team is so fixated on improving their machine they have yet to paint it. 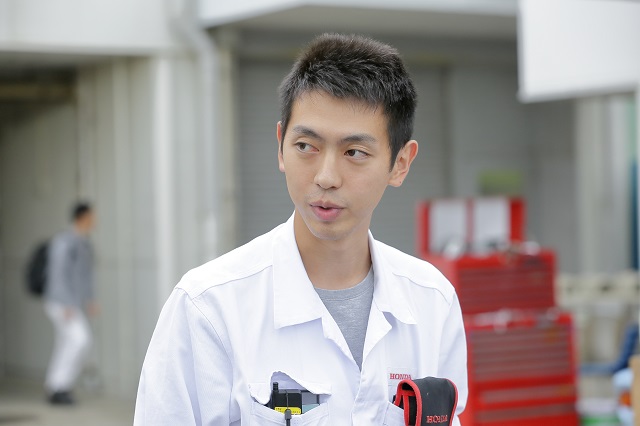 “I encourage them to focus on the creative process leading up to the race,” says adviser Tsukagoshi

Ten days before the national finals competition of 2018 Honda Eco Mileage Challenge, members of the Eco Run Club* at Honda Technical College Kanto, an auto mechanic school in Fujimino, Saitama Prefecture, immerse themselves in building their machine in front of their shop after class. They are so immersed in the project that they fail to notice it’s getting dark.

The Eco Run Club has about a dozen members, many of whom joined not just because they love to make things with their hands, but also because of a strong interest in environmental issues. As one member comments, “I joined the Eco Run Club because then I could study things like fuel efficiency and environmental performance.” The club competes in the Honda Eco Mileage Challenge every year.

In last year’s challenge, the club entered two machines and finished in 12th and 13th place. Driven by disappointment, this year they are entering one machine that combines the best aspects of both machines, along with an entirely new cowling. “The cowling we made from scratch ourselves after researching sturdy, lightweight materials and how to work them. The total weight is about half that of last year’s, and the shape should also reduce air resistance by a lot.”

“The cowling is still unpainted cause we’ve been so busy doing other things — trying aluminum welding for the first time, remaking the braking system. We’ll definitely get it done before the race.” As they talk with near-endless enthusiasm, one can see on their faces an eagerness to build a more fuel-efficient machine and drive it at the race.

“I encourage them to focus more on the creative process leading up to the race than what place they end up in.” Talking as he watches the team work is Takuya Tsukagoshi, a faculty member of Honda Technical College Kanto (Automobile Development Engineer Division, Educational Department), and adviser to the students. “I want them to have the sense of achievement you get when you reach a goal through self-effort,” he continues. A club member responds brightly, “The best feeling is the feeling of achievement when everyone works together and fuel efficiency improves.”

The Eco Run Club expects their machine to do better in this year’s competition because of its lighter weight, more aerodynamic cowl, and modifications that make the engine lighter. They told me their targets for this year: fuel efficiency of 1,500 km/L and finish in 6th place.

*”Eco Run” is the nickname for the Honda Eco Mileage Challenge.