The fuel cell stack (FC stack) is central to fuel cell vehicles, but immediately after manufacture, it only produces around 70% of its full output. To get 100% performance from the fuel cell stack, Honda Engineering Co., Ltd. implements a breaking-in type process called “aging” as the final step in the manufacturing process. The company has now developed a groundbreaking aging technique called “CV aging” in the manufacture of FC stacks for the Clarity Fuel Cell. As well as dramatically improving production efficiency, the innovative new technique significantly reduces hydrogen consumption and energy usage, making it a big step towards bringing fuel cell vehicles into mainstream use. 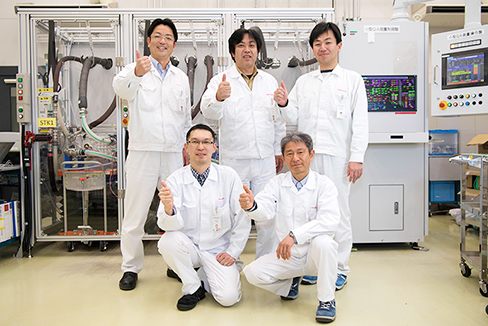 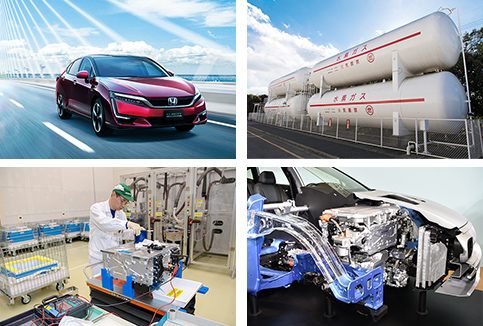 The awards ceremony for the 2017 Grand Prize for Excellence in Energy Efficiency and Conservation was held at Tokyo Big Sight on February 14, 2018, and development team members from Honda Engineering Co., Ltd. were there to receive the Reviewer’s Prize in the Successful Case of Energy Conservation category, awarded for their work on “significantly reducing hydrogen consumption in fuel cell stack manufacture by a new aging technique”.
The Energy Efficiency and Conservation Grand Prize is held annually by the Energy Conservation Center Japan (ECCJ), sponsored by Japan’s Ministry of Economy, Trade and Industry. This awards scheme recognizes outstanding energy conservation initiatives in Japan’s industry, service and transportation sectors, as well as advanced energy-efficient products. This award recognizes the new production technique developed by Honda Engineering as an advanced technology with a significant effect on energy conservation.

The new technique developed by Honda Engineering (EG) is used in the manufacture of the fuel cell stack (FC stack) which is central to fuel cell vehicles (FCV). The FC stack generates electricity by harnessing a chemical reaction between hydrogen and atmospheric oxygen, and this electricity drives the vehicle’s motor. However, when a FC stack is manufactured, in its initial state it only produces around 70% of its full output, so a process called “aging” must be applied to the fuel cell stack before mounting it onto the FCV to obtain 100% performance. The conventional method of aging involves actually supplying hydrogen and oxygen and getting the FC stack to generate electricity for a long time with a large output. The output of the FC stack gradually increases as it continuously runs at full power, until it finally reaches its full performance. But Honda Engineering has now developed a completely different technique, which uses significantly less hydrogen and energy than the conventional method. 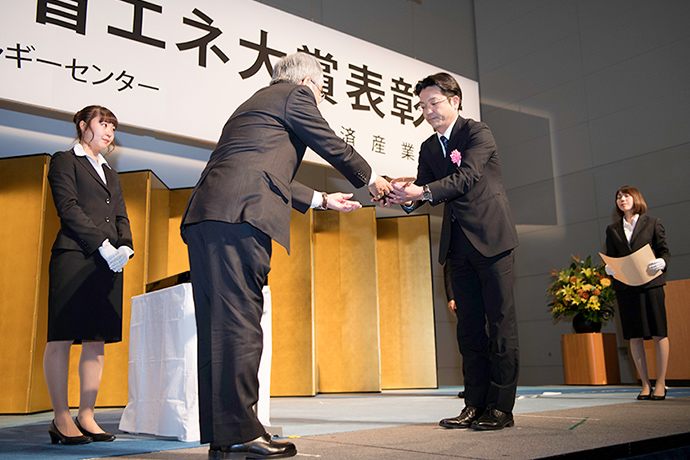 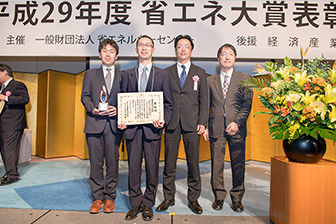 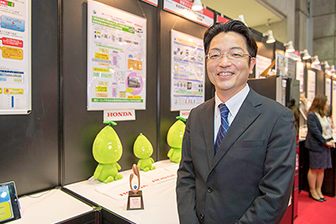 A finished vehicle inspection in the Vehicle Quality Dept. 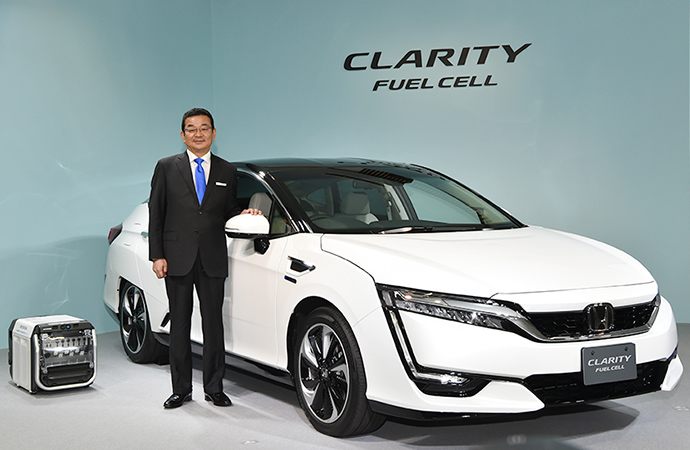 The powertrain has been reduced in size, so it all fits under the hood 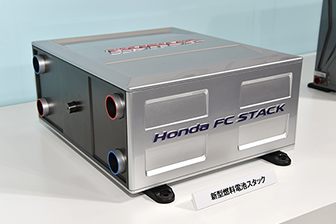 Honda Engineering (EG) is responsible for developing production technologies and equipment for the production of Honda products. As well as developing production engineering solutions for cars and motorbikes and supplying equipment to Honda factories, EG also directly produces certain components—one of which is the FC stack. Manufacturing FC stacks involves completely different technology from conventional automotive manufacture, and this manufacturing technology is still being developed, so currently EG produces this vital component in-house.
The new aging technique was developed as part of the production process for Honda’s latest FCV, the Clarity Fuel Cell. EG produces the FC stacks and ages them using the new technique before delivering them to the FCV assembly plant.

Unveiled in March 2016, the Clarity Fuel Cell was developed by Honda with the aim of full-scale rollout of FCVs. Production was planned on a much larger scale than its predecessor, the FCX Clarity. But that model was produced one by one using almost hand-made production methods, so the increased production quantity could not be achieved with the existing methods. So, the development of the Clarity Fuel Cell involved developing mass production technologies at the same time as designing the vehicle itself. The prize-winning new aging method is one of the innovative techniques that emerged from this process.

The story goes back to 2008 with the launch of the previous model, the FCX Clarity. EG had been involved in developing fuel cell vehicles for Honda since 1998, and was responsible for producing the FC stack as well as developing production engineering solutions for the FCX Clarity. But as soon as that car was launched in 2008, Honda started developing the next model, and EG started developing production engineering solutions with the new model in mind.

“Honda saw the FCV as the ultimate eco-car, and they had a vision of evolving from the next model to the next, and even the next model after that,” recalls Akihiro Nonogaki, senior staff engineer at Honda Engineering’s Research and Development Division. “As soon as we thought work on the FCX Clarity had settled down, development started on the next model. So, looking to the future, I drew a roadmap showing what kind of production engineering solutions would be required and when, and I used that to identify what technologies we would need to develop for the next model.”
The FCX Clarity achieved the world’s first sedan-type FCV package, with a FC stack drastically reduced in size. This model showed the world that FCVs had reached the stage of practical use, offering comfort and mileage comparable to gasoline cars.
“We realized that ‘mass production’ was going to be a major theme for the next model. One particular issue from the mass production point of view was aging. An FC stack can’t produce its full performance without aging, a kind of breaking-in process, so we always perform aging immediately after assembly, before the FC stack is shipped out. But this breaking-in required massive equipment, and was consuming huge amounts of hydrogen and energy,” explains Nonogaki. 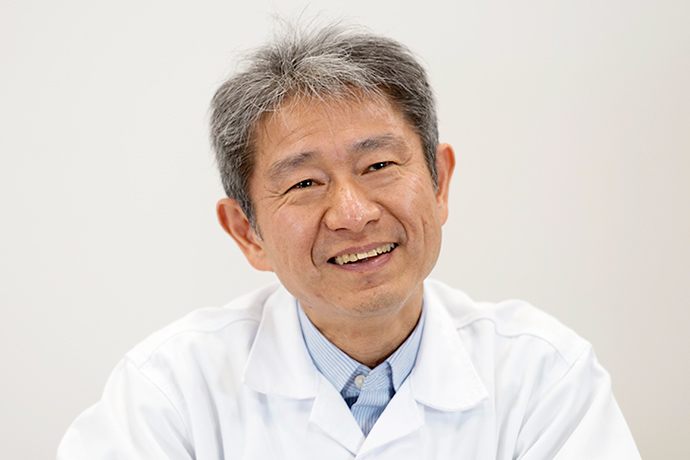 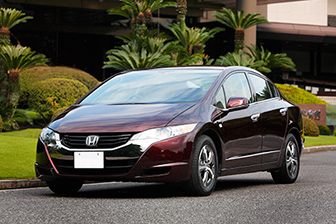 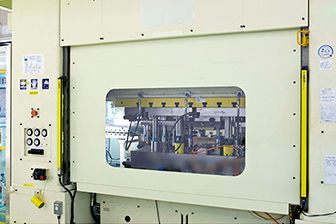 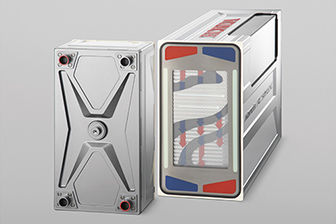 At the time, the aging process of the FC stack for the FCX Clarity used hydrogen equivalent to over 20,000 km when converted into running distance. Without generating at high output for this long, the FC stack could not produce its full performance. But performing this aging process on each and every FC stack was a major barrier to large-scale production. If a simpler and more efficient aging method could not be found, mass production of the FC stack would never be possible. And consuming such huge amounts of hydrogen production energy could not be justified for a vehicle that was supposed to be the ultimate eco-car. It was vital to develop a new aging technique for the next model.