Honda's mini-vehicle, the N-BOX, underwent a full model change in September 2017. The all-new second generation model was redeveloped for the first time in 6 years from the ground up―from the body and chassis to the engine. Why deliberately redesign the mechanism of the previous model, a huge hit with a cumulative sales record of over 1.12 million units? The answer reveals the story of the intricate path taken by the new model's development team. 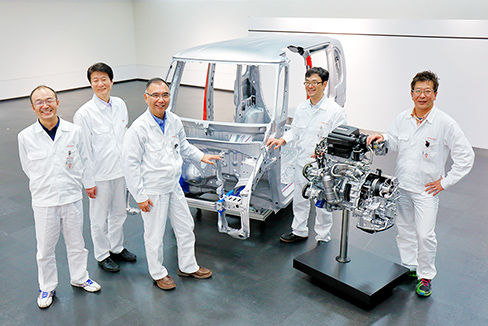 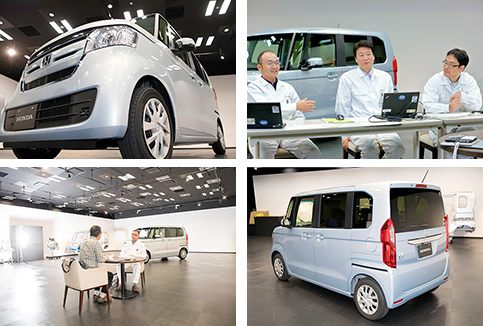 Honda began sales of the all-new second generation N-BOX mini-vehicle in September 1, 2017. The first generation N-BOX was a bestselling model, ranking first in the competitive mini-vehicle category of annual new vehicle sales for four times in 2012, 2013, 2015, and 2016, and with cumulative sales exceeding 1.12 million cars. Marking the first full model change of the car, a crowd of press reporters ranging from auto industry media groups to magazine correspondents came to witness the unveiling of the second generation N-BOX held in August 31.

Kiyonari Shirato, chief engineer at Automobile R&D Center, served as the large project leader (LPL) in the development of the new N-BOX model. His first assignment after joining Honda was on body design of the first NSX, after which he gained more experience with the body design of models such as Honda Inspire, Accord, and Freed before serving as deputy LPL for the first N-BOX. The current model change was his very first appointment as LPL.
"My first thought was, what have I got myself into?" says Shirato, laughing. "This was the car that enabled Honda to revive its mini-vehicle business, thanks to the fact that the model sold so well and for so long. Considering that this is my first project as LPL, the responsibility of taking charge for this car was too heavy."
On top of that, there were hardly any specific instructions from the company regarding development.
"It's the LPL's job to conceive of what kind of car to make. Other than the directive to bring out a new model, Honda entrusts everything with a clean slate to the LPL. The pressure was all the more intense because of that," adds Shirato. 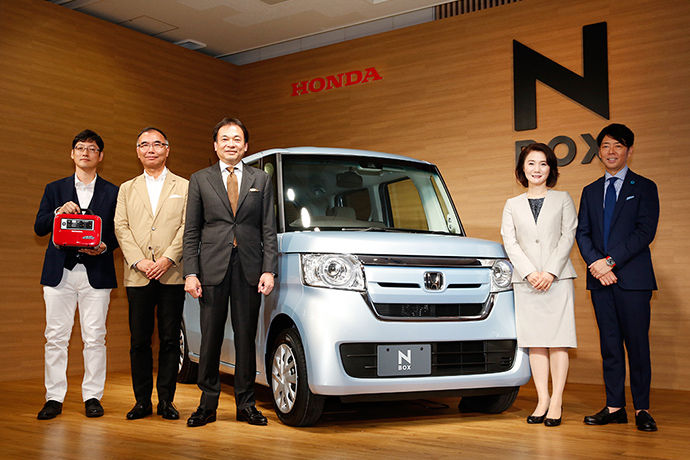 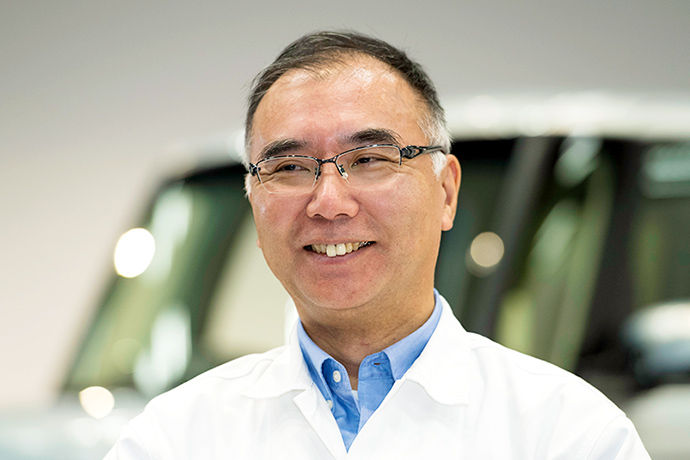 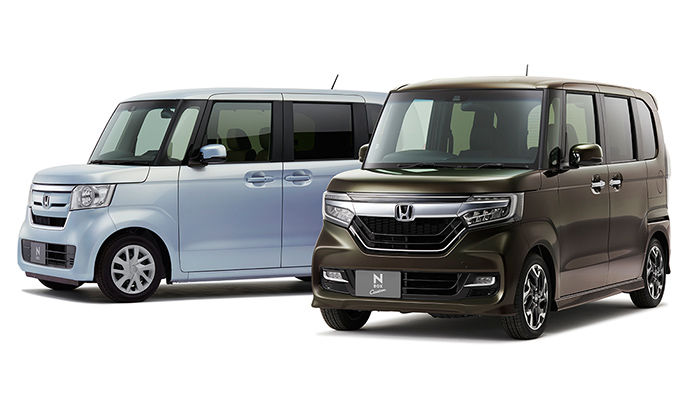 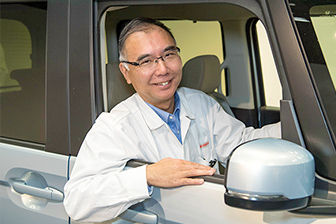 Development concept: for the happiness of families in Japan 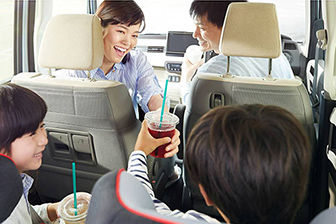 Shirato imposed three conditions on himself before working as LPL for the first time. First, to relentlessly pursue the car that customers want, rather than the car that I want to make. Second, to decide when decisions have to be made and not to hesitate. Third, to remain firm and never waver from my decisions.
"I'm just human, of course, so there are times when I can't decide or hesitate, or make wrong decisions. But as leader of the team, I have to keep these to myself and not let it out in the open. Otherwise, the team will lose their way. I believe that the most important thing for LPL is to present a decisive attitude, so I made sure to act that way," adds Shirato.

Following these guidelines, Shirato first delved into what customers want from the N-BOX, in order to decide on what the new model will be like.
"The family car in Japan is now a minivan. Actually, the former N-BOX had also been used as a family car, similar to a mini-van," explains Shirato. "I thought, why not make a car that will be recognized as the best choice for a family car in Japan across categories, including regular-sized vehicles? That's the N-BOX the customer wants."
To be the standard for the next generation of family cars, chosen by car buyers for features that outmatch even regular-sized minivans. Instead of catchy marketable elements, such as first in roominess, best in fuel economy or the most power, we aimed for the best balance of all these elements in a package that maximizes happiness for its owners, adopting the concept "for the happiness of families in Japan" for the car.

However, there were already concerns regarding technical issues even before development started in the second generation N-BOX, namely improving fuel economy and reducing vehicle weight. Since the first N-BOX was released, mini vehicles from competing companies have substantially reduced vehicle weight, which led to better gas mileage. Consequently, we had to make the second generation N-BOX significantly lighter to provide the fuel economy that can rival other cars.

Before going into detailed development, Shirato proposed a development plan to Honda's senior executives to reduce the new model's weight by 70 to 80 kg. Objectively speaking, a reduction of 70 to 80 kg on mini vehicles, which are characteristically light to begin with, is an extraordinarily high value which is expected to dramatically improve fuel economy. But the response he received was, "So what's the value in remodeling with that?" rejecting his plan. 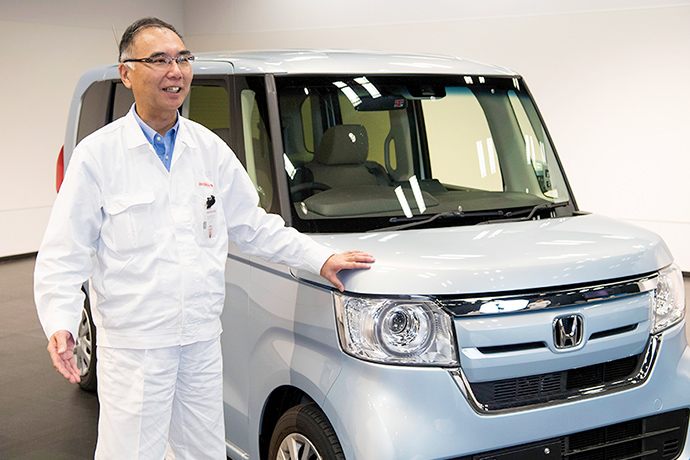 "We worked backward and analyzed what we needed to do for the future to reach our ideal model," says Shirato.

"Everyone in the previous development team thought long and hard why the plan was rejected. We switched over to working backward and analyzed what we needed to do for the future to reach our ideal model, instead of building up on what we can do right now," says Shirato.

After completing and releasing the second generation N-BOX, competitors will also come out with new models, and successors for their new models, loaded with the latest technology. We made informed guesses on how the industry will evolve and ran simulations to see how we should design the new N-BOX to maintain our competitive edge until the end of the new model's production.
"Until then, we had been making plans based on our notions of a mini vehicle model change," recalls Shirato. "The usual procedure was to incorporate the latest technological advances while reusing the previous model’s design. However, our simulation showed that the second generation N-BOX has to evolve more drastically to include technologies that have not yet been produced. For lightweighting, we needed to reduce weight by nearly twice as much as the initial plan. So we presented our findings to the senior executives."
A car one or two generations ahead of its class, by dramatically evolving for low fuel consumption and lighter weight—Shirato's next proposal involved much higher development costs. Seeing his unshakeable belief, however, the top executives accepted his proposal, "All right then, let's do it."
Thus, the second generation N-BOX model was developed in an unprecedented manner for a mini-vehicle model change, with a revolutionary platform and engine.

Next - Bold, innovative use of materials to get the ultimate in light vehicle body