Despite being crippled by a series of unprecedentedly large earthquakes that struck the Kumamoto region in April 2016, the Kumamoto Factory, Honda’s only motorcycle manufacturing operation in Japan, achieved full recovery in an astonishing five months. The factory overcame such difficulties by joining hands with the local community, and without sacrificing its environmental standards, preventing pollution and impacts on the surrounding environment even amidst extraordinary conditions. Now, the factory is pursuing various innovations to achieve optimum assembly processes and take the next step in its evolution as a global leader of Honda motorcycle manufacturing. 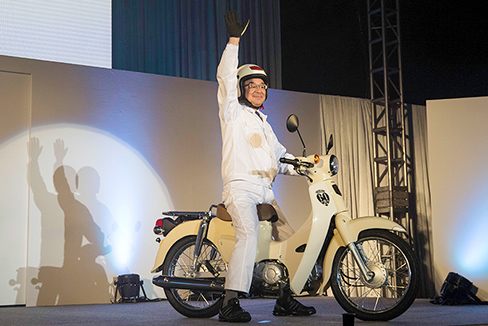 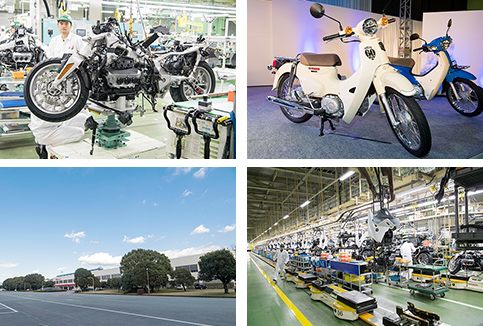 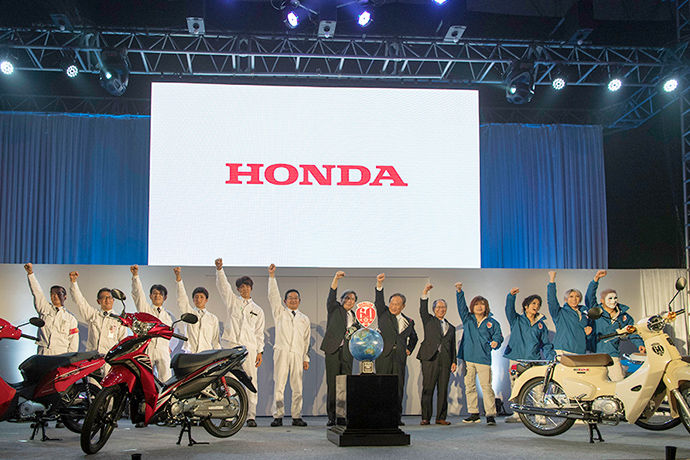 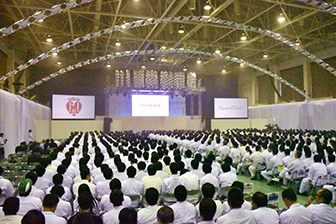 The factory’s entire staff attended the ceremony, including broadcasts to remote locations 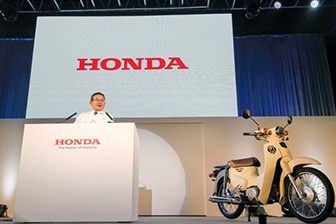 President Hachigo speaking beside the 100 millionth unit, a Super Cub 110

A year and half after scenes of devastation shocked newspaper and television audiences across Japan, Kumamoto Factory celebrated global production of the 100 millionth Super Cub-series bike. The ceremony coincided with announcement that the Super Cub―Honda’s longest-selling model sold worldwide―would again be produced at Kumamoto Factory starting with the release of a new model in November 2017. At the ceremony, held October 19, Honda President and CEO Takahiro Hachigo made an appearance along with members of Golden Bomber, popular Japanese rock band and fiscal 2017 brand ambassadors for Honda motorcycles in Japan. Filling the venue, attendees joined voices in celebrating their achievement of 100 million units.

The venue for the event was the factory’s gymnasium, located on the same property—the same location that provided refuge and relief to local evacuees during the earthquakes. At one time, more than 100 people lived here.
According to associates who attended the ceremony, memories of the disaster tugged at their hearts the moment they entered the gymnasium: Visions of themselves standing dumbstruck by the sight of the factory’s devastation. Days and days of working feverishly to repair facilities while cooking food and clearing rubble for displaced neighbors. Realizing that these events were still only a year and a half ago caused new feelings to swell in their chests.

At 9:26 pm on April 14, 2016, a 6.5-magnitude earthquake hit the Kumamoto City area of Kumamoto Prefecture at a depth of 11 kilometers. This was the first big tremor in a major disaster that would later be named the 2016 Kumamoto Earthquakes. The towns of Mashiki and Nishihara near the epicenter, registered a 7 on the Japanese seismic intensity scale, becoming the first ever in Kyushu to do so. Meanwhile, the capital city of Kumamoto recorded a 6-lower, and a broad swath of the Kyushu region shook at a 3 to 4 intensity.

Norio Hirayanagi, staff engineer in the Facilities Control Department of Kumamoto Factory, which was situated fairly close to the epicenter, was watching TV in his home living room when the quake hit. Given his location in the east district of Kumamoto City, relatively close to the epicenter, Hirayanagi could hardly support his own body amidst the sudden swaying. When the quake finally subsided and he looked around the house, he found furniture toppled over, broken dishes scattered across the floor, and the electricity and water cut off.
“The first thing I did was check on my family and make sure everyone was okay, and we evacuated outside. Next, I became concerned about conditions at the factory, so I called the office,” he says.
Hirayanagi, who manages the factory’s facilities, kept calling to check on the level of damage sustained by the production equipment and other facilities, but couldn’t get through. Finally, he got a hold of the mobile phone of Nishioka, his group leader, and arranged to meet at the factory. Hirayanagi set out.
“It was about 11 pm when I arrived,” he continues. “I was stopped by security at the entrance, but when I told them I was facilities management staff he let me through. When I finally got to my department’s office building, I was stunned. The walls and ceiling had collapsed and laid in pieces on the floor. It looked nothing like an office.” 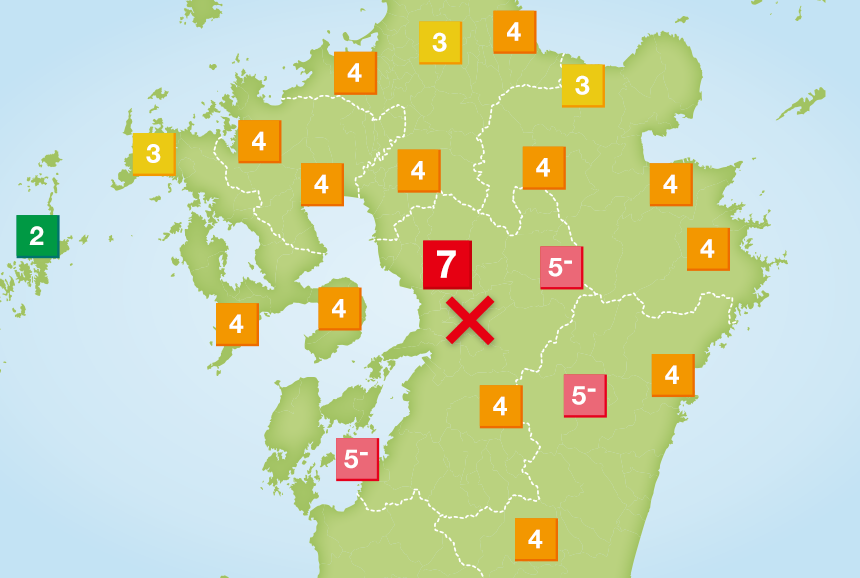 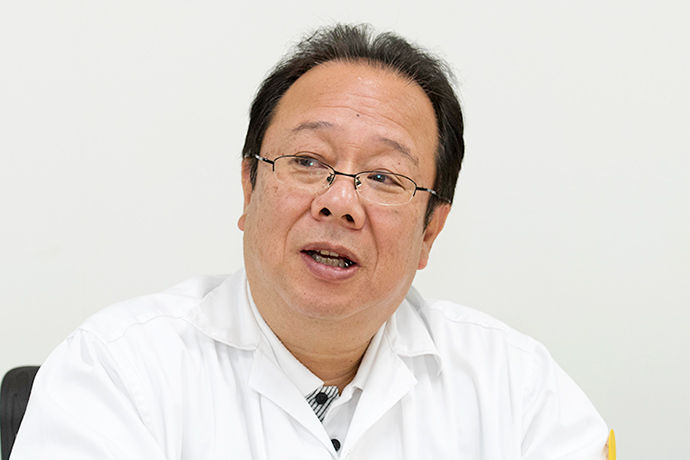 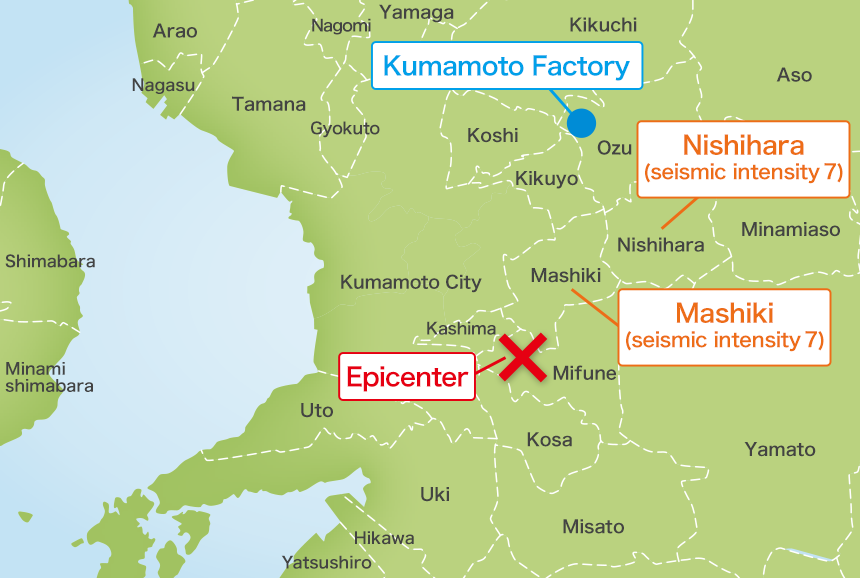 Ozu, home of Kumamoto Factory, is situated near Mashiki and Nishihara, both of which recorded a seismic intensity of 7

For Takuya Nishioka, it was only his second week since becoming group leader in the Facilities Control Department. He was relaxing in his home in Kikuyo when an earthquake larger than he had ever experienced hit.
“My first concern when the shaking stopped was the safety of two members on my team who were working,” says Nishioka.
Luckily, his call immediately went through and both were confirmed safe. Since both appeared deeply distraught, however, Nishioka instructed them to evacuate to a safe location before hanging up.
“After that, it became harder to connect by phone, so I contacted the department manager and other team members by text message and arranged for everyone who could to meet at the factory. When I got there, staff from our some of the subcontractors with whom we work regularly, such as electrical equipment and construction companies, had come and joined our facilities management team out of concern, so that was helpful,” says Nishioka.
Working in pairs, members of the facilities management team and specialists from the subcontractors inspected the property. The inside of the factory, illuminated by flashlights in the pitch black due to the power outage, was a troubling sight—water spewed outward here and there, pipes hung from the ceiling, walls had crumbled. Since it was dangerous to move about as the aftershocks continued and objects fell from above with each shake, the group decided to perform the bare minimum of checks and then meet again for a more detailed assessment after sunrise, before dispersing.

When they reassembled at 8 the next morning, the group conducted a more detailed assessment of the damage.

“It was a big shock seeing the full extent of the devastation exposed in the daylight,” recalls Nishioka. “It was painfully obvious that production would have to be suspended. Our job was to come up with a plan on how to go about repairing the buildings and equipment and when production could resume. Working with our subcontractors in each work area, we formulated a general recovery procedure and estimated it would take about two weeks to resume operations. We submitted that as the opinion of the Facilities Control Department and concluded our work for the day.”

A tumultuous day finally came to a close for Hirayanagi, Nishioka, and others on the facilities management team. They each went to bed planning to do an even more detailed inspection and verification the next morning, and step up their work to restore the factory as early as possible. But those plans would be dashed in their sleep.
Late that night, at 1:25 am on April 16, a 7.3-magnitude earthquake—the largest of the 2016 Kumamoto Earthquakes—slammed the Kumamoto region, and Kumamoto Factory, once again.