The castle moat tours in Matsue, Shimane, Japan, ferry tourists through the centuries-old canals that surround Matsue Castle, a national treasure. Nearly all of the 45 boats used in the tours are powered by the Honda BF9.9, a four-stroke outboard motor notable for its exceptional quietness and high torque at low speeds. Responding to a request from the Matsue City Tourism Promotion Public Corporation, the public company operating the tours, in 2017 Honda developed and introduced a model specially designed for the tours, which, as it turns out, impose strict operating requirements on outboard motors. 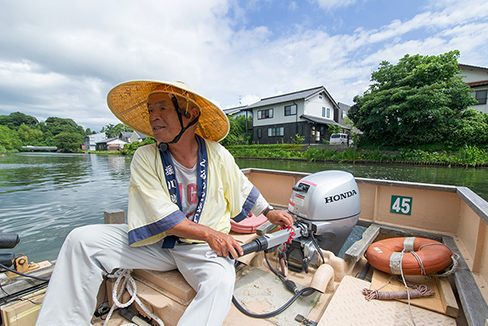 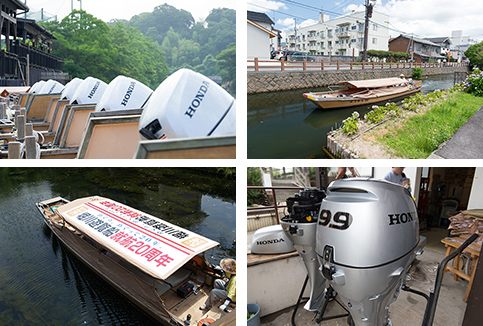 The quiet yet essential role of the Honda BF9.9 four-stroke outboard

Matsue City came to prominence as a castle town of the Matsue Domain, growing into the largest city in the San’in region, with a current population of 200,000. Matsue Castle, a symbol of the city, is one of five castles in Japan whose keep has been designated a national treasure, alongside the likes of Inuyama Castle in Aichi and Matsumoto Castle in Nagano. Many parts of the castle, built in 1611, still remain in their original form, and the castle and its surrounds are included in the top 100 cityscapes of Japan, as chosen by a committee of Japan's Ministry of Land, Infrastructure, Transport and Tourism.
In July 1997, sightseeing tours were begun on the canals around Matsue Castle using small boats operated by the Matsue City Tourism Promotion Public Corporation. The tours, which circle the inner and outer moats of Matsue Castle in about 50 minutes, are a vital part of local tourism, having reached its 6 millionth passenger in November 2016.
The boats used for the moat tours are purpose-built; roughly eight meters in length and two meters across, they can carry up to twelve passengers. For propulsion, nearly all of the 45 boats now in operation use the Honda BF9.9 outboard, which comes with a 9.9-horsepower, 222-cc, inline two-cylinder four-stroke engine.
“When we opened for business 20 years ago we also used outboard motors from other brands,” says Ryuji Nozaki, a mechanic with the Horikawa Moat Tour Control Office who maintains the tour boats. “The other brands were more common, in fact. But because of problems with performance and reliability and noise, we gradually shifted to Honda outboards, bringing us to the number we have today.” 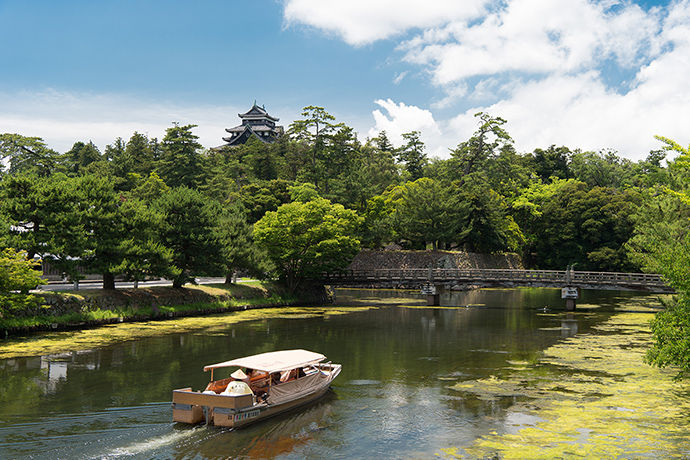 A sightseeing boat plies the canal near Kitabori Bridge 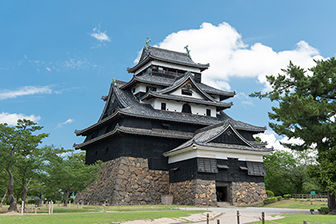 Matsue Castle, a national treasure and symbol of Matsue City 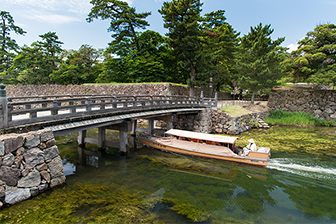 A boat passes under a bridge over the canal 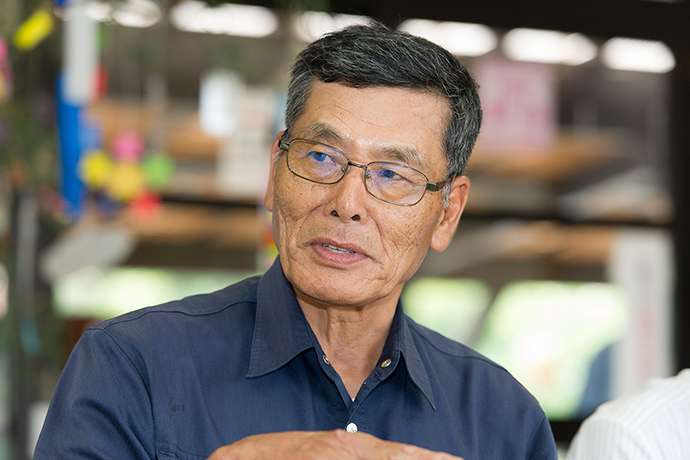 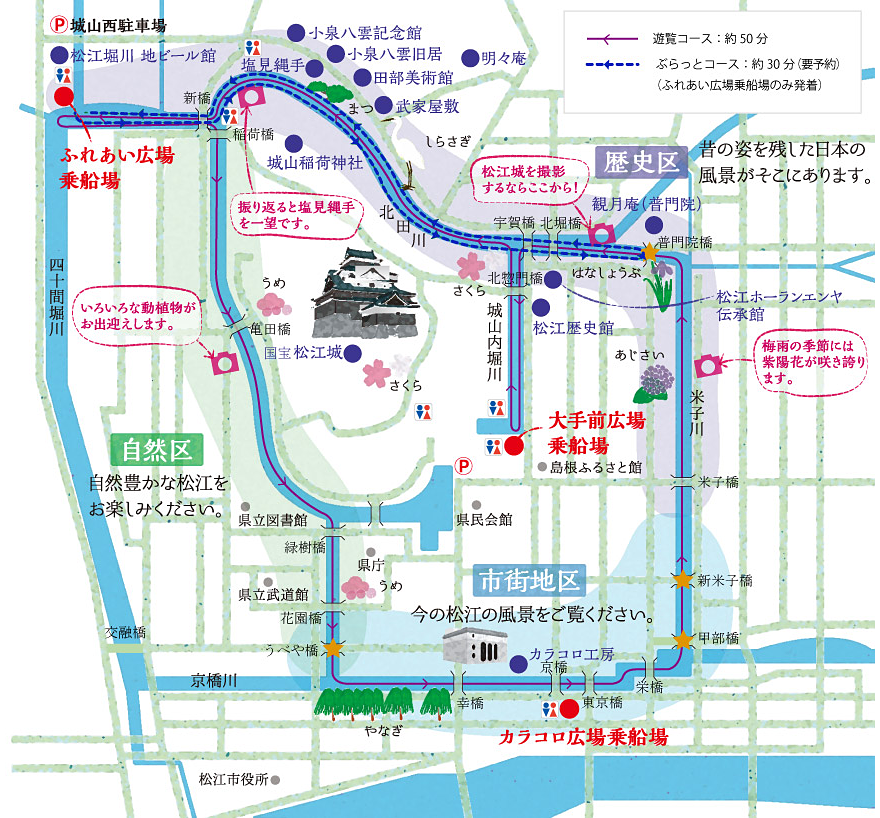 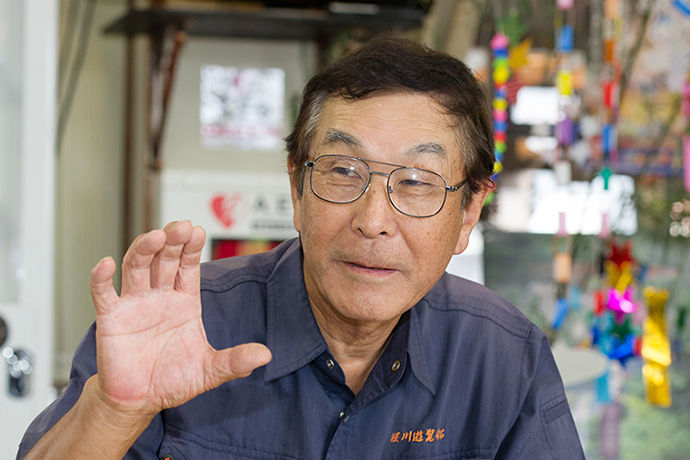 According to Nozaki, the canals impose several limitations on how the outboard motors are run.
“Unlike your ordinary ocean cruise, for example, the water is only about 0.5 to 1.5 meters deep, so very shallow. And the tour route winds through narrow channels and under low bridges, so low that the passengers are sometimes asked to duck down while the awning of the boat is lowered to pass through. And in areas with houses near the canal, the throttle is left closed for long periods to prevent noise pollution coming from the engine.”
These conditions not only require dexterity from the men and women steering the boats, but also impose strict requirements on the motors—specifically, a high degree of quietness and strong torque at low speeds.

It was these conditions that led to a certain problem occurring with the outboard motors of the tour boats. On cold winter mornings, when the engines were left idling after start-up, they would sputter and then come to a stop.
“In searching for the cause, we found that the boats that were experiencing trouble had carbon deposits on the pilot screw (a screw that adjusts fuel supply in the idle to low speed range) in the carburetor,” explains Nozaki. “It seems the carbon had accumulated gradually over many years of use. And since cleaning the part and reassembling it resolved the issue, we simply cleaned the part whenever the problem occurred. We did that over and over.”
Since several boats were presenting similar symptoms, Nozaki and another mechanic, Atsushi Nozu, felt compelled to get to the bottom of it. They developed a hypothesis.
Nozaki explains: “In normal conditions of outboard motor use, opening the throttle increases engine speed and blows out any carbon. But on the castle moat tours, which require running the engines constantly at low speeds, the carbon accumulates in the carburetor, which ends up clogging the fuel line.”
They couldn’t properly test their hypothesis, however, so they had to address the problem as it arose. Still, with limited staff and limited time, the burden of correcting a problem that occurred intermittently and without warning was significant.

At the time, the tour boats were still using outboard engines from multiple brands.
“When we consulted the dealers that sold us the engines, Honda was the only one that took real action to fix the problem. They got everyone involved, not just customer service but even their product developers,” says Nozaki.